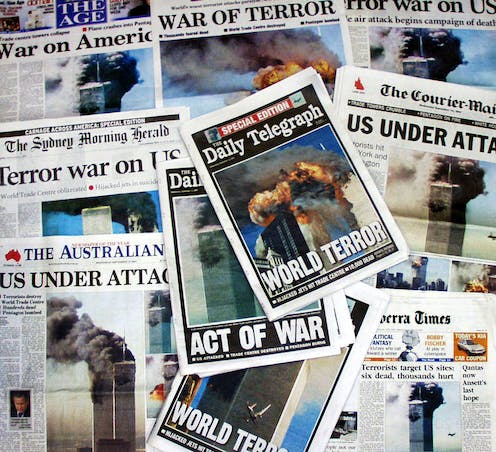 With taxes and health care emerging as key issues in the upcoming federal election, we’re running a series this week looking at the main issues that swung elections in the past, from agricultural workers’ wages to the Vietnam War. Read...

With taxes and health care emerging as key issues in the upcoming federal election, we’re running a series this week looking at the main issues that swung elections in the past, from agricultural workers’ wages to the Vietnam War. Read other stories in the series here.

The 2001 Australian federal election was a remarkable contest. Widely expected to see the Howard coalition government lose office after two lacklustre terms, the Tampa refugee crisis and the September 11 terrorist attacks in the United States allowed the government to turn its political fortunes around.

Winning a presumed unwinnable election on the back of a strong national security agenda gave Howard’s team renewed impetus and assured its place in history. It fundamentally reshaped Australia’s political culture.

The Howard government had rocky start to 2001. It had won the 1998 GST election, but failed to gain a majority of the popular vote. Resentment over the GST remained strong. Ultraconservative voters were turning to Pauline Hanson’s One Nation Party, and Newspoll surveys showed the Coalition’s approval ratings trailing Labor’s (39 to 45).

Conservative governments fell in Western Australia and the Northern Territory, and voter support for the coalition parties collapsed in the Queensland state election. The loss of the once safe seat of Ryan, and the leaking of a report by the Liberal Party president stating that the Coalition was mean, tricky and out of touch, added fuel to the fire. Most political analysts agreed that the government was doomed.

Howard tried to stem the flow, and victory in a byelection in the Victorian seat of Aston in July suggested some progress. But, the real circuit-breaker came in August, with the Tampa crisis. Those dramatic events saw the arrival of a Norwegian tanker in Australian waters – and the refusal of the Howard government to accept the passengers seeking asylum – give birth to the infamous “Pacific Solution”. 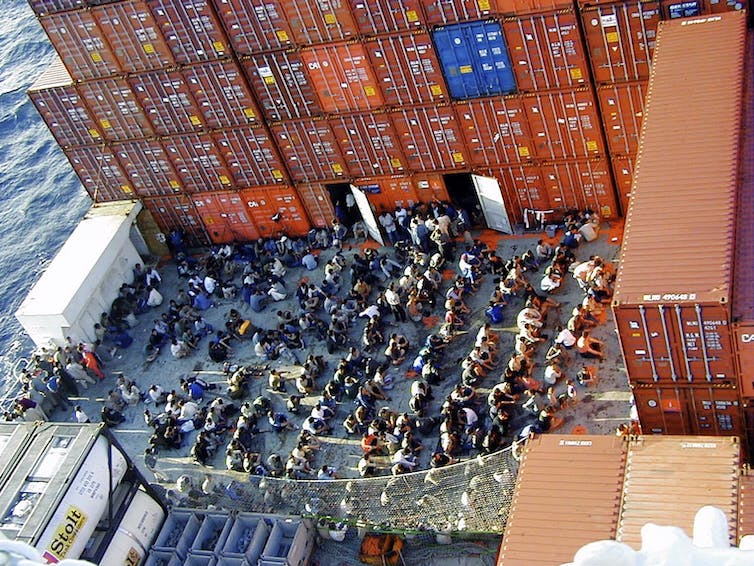 Asylum seekers wait on board the MS Tampa after being denied entry to Australian waters. Wallenius Wilhelmsen/AAP

What followed was a highly politicised and militarised response to the “problem” of unauthorised maritime arrivals. This included the excising of islands from Australia’s migration zone in order to prevent asylum-seekers making visa applications, the legalisation of offshore processing, the removal of boats from Australian territorial waters by the navy, and the co-opting of Pacific nations like Nauru and Papua New Guinea into offshore detention management programs.

Some commentators have interpreted Howard’s Tampa battle as pure political opportunism. But, this ignores the evidence that his government was already primed for a fight on border control. After low levels of boat arrivals for most of the 1990s, they rose to 3,721 in 1999, declined slightly in 2000 then rose significantly again in 2001 to 5,516.

Concern for the irregular boat arrivals began to build. This was made visible by increasingly strident public discourse and tough border control measures, like the Border Protection Legislation Amendment Act 1999 and Migration Legislation Amendment Act 1999. The treatment of asylum-seekers caught in indefinite mainland detention was a source of constant media attention and political embarrassment for the government.

Tampa was Howard’s line in the sand. It profoundly challenged his commitment as leader to the protection of national security and sovereignty. It confirmed his affinity with the mood and aspirations of the Australian people – a bond powerfully articulated in his declaration that:

We will decide who comes to this country and the circumstances in which they come.

As a seasoned politician, Howard also recognised Tampa’s electoral potential. From the beginning, his government was willing to politicise the issue. Labor’s evident ambiguity towards the Border Protection bills – agreeing, then refusing to support the Coalition’s legislation, and finally buckling under political pressure – was seen as “wishy-washy”. Claims were made in parliament that Labor was prepared to put the interests of people smugglers and “illegal immigrants” ahead of Australians. 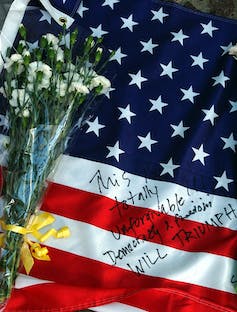 An American flag shown outside the US Consulate in Sydney on September 12, 2001. Dean Lewins/AAP

Within weeks of Tampa, catastrophic terrorist attacks took place in the United States. Howard, in Washington DC at the time, was deeply affected and invoked the 50-year-old ANZUS treaty in support of its ally.

By October, when the election was called, the public mood had changed. Polls showed the Coalition’s approval ratings now at 50%, compared to Labor’s 35%. Howard’s personal rating was at a five-year high of 61%.

Incumbents enjoy advantages in campaigns. Nevertheless, the Howard government’s political mastery was evident in its ability to reframe the election as a referendum on national security. It created a link between the twin “threats” of terrorism and asylum-seekers in the public’s mind, and asserted its superior national security credentials.

The ALP campaigned well on some issues, but failed to provide a convincing counter-narrative to Howard’s agenda. Howard repeatedly pointed to Opposition Leader Kim Beazley’s ambivalence over the Pacific Solution as proof that he lacked the “ticker” to be prime minister.

Evidence that the government manipulated the facts surrounding the scandalous “children overboard” affair did not curb the popular view that dangerous times demanded strong leadership. In the end, the government was re-elected on November 10 with a swing of almost 2%, though barely any seats changed hands.

National security still on the agenda

The 2001 election changed Australia. It sealed Howard’s reputation as a strong leader, and gave him six more years in office. Success legitimated his hawkish outlook, and set the policy agenda for almost two decades. Australian troops, already committed to the conflict in Afghanistan as part of the US-led War on Terror, became ensnared in the illegal Iraq war.

Have the dynamics of that political contest dissipated?

In the current campaign, healthcare, climate change and economics have dominated, but the lure of “national security” for electoral advantage is still difficult to resist.

Many of the policy and political priorities established in 2001 remain intact. Both major parties are committed to offshore processing, mandatory detention and push-backs as deterrent mechanisms for asylum seekers. The fact that 915 refugees and asylum-seekers are still languishing on Nauru and Manus Island, confirm that politics, not pragmatism or human rights, still shapes Australian asylum-seeker policy.

The fight against terrorism continues. Extreme right-wing political movements are growing, emboldened by the the politics of hate unleashed in 2001. It is almost 20 years since Tampa and 9/11, but those events continue to cast their shadow over the Australian political landscape.