Some weeks back, Sydney Morning Herald political editor Peter Hartcher grimly characterised the election as a choice between an angry dad figure in a baseball cap and a sad sack who learned public speaking in funeral parlour.

There has been precious little wit since in the procedural campaign dirge rolled out on either side – a rare exception being Bill Shorten’s “space invader” quip directed at Scott Morrison in last Friday night’s leaders’ debate.

It was probably focus group feedback rather than Hartcher’s astringent barb, but both leaders do seem to have modified their presentation as the campaigns have progressed.

Image is everything – and nothing

Still tetchy and frustrated, Morrison seems to have benched the American baseball cap headwear – although not quickly enough to forestall a caustic Paul Keating attack:

For his part, Shorten has apparently been told to smile no matter what. Such insouciance begins to look odd if it persists under verbal assault from his opponent or when confronted by an aggressive interviewer. Abnormal might be another word for it.

Amazingly, the parties’ body language experts have subtracted nothing much from nothing at all – and come up with even less. So much for politics obeying the “iron laws of arithmetic”, as John Howard was fond of saying.

Read more: 'Fairness' versus 'strength' – the battle to frame the federal election

Who was it who observed that, sincerity is everything - once you can fake that, you’ve got it made?

To call the major party campaigns risk averse makes them sound occasionally intriguing, perhaps even adventurous to a point.

They are not. Nor is their rhetoric inspiring, with neither leader seeking to invoke a national vision except inasmuch as it can be safely conveyed within an orthodox economic rationale.

US Democratic strategist James Carville’s now-ubiquitous entreaty in Bill Clinton’s 1992 presidential campaign “it’s the economy, stupid,” has become the cold heart of modern politics – a prevailing neoliberal dictum that denudes political imagery of anything that cannot also be shown on a balance sheet.

What’s forgotten is that Carville’s supposed primacy of the economy was just one of three key messages Clinton campaigners were asked to stress, the others being “change versus more of the same” and “don’t forget health care.”

It’s uncanny how these work for Shorten now. Indeed, more of the same might well be the greatest risk in this election – more dangerous than budget blowouts, higher taxes or rising debt.

So arid has the governmental battleground become that Keating, arguably the most economically focused of Labor’s prime ministers, is looking for soul. While attending Labor’s campaign launch in Brisbane, he emphasised:

Campaigning not to lose

Intended or otherwise, “Big Picture” Keating’s lament over the barely referenced vision thing applies to Labor also – if to a lesser extent.

The sharpest segue toward any sort of grand vision can be found in Labor’s education and training plans, which are fiscally bold – long-hand for expensive - yet mostly iterative in a pure reform sense.

Ditto for the crimping of tax loopholes such as negative gearing, franking credit cash bonuses and capital gains tax. These changes are electorally bold, and undeniably redistributive, but they are also essentially remedial rather transformative in economic reform context.

Climate change is perhaps the big values difference, but after a decade of bruising political negation on carbon emissions, Labor’s plans are substantially pared back from its ambitions of a decade ago. They are now largely those of the government, if delivered faster – no carbon tax, no cap and trade scheme, and the plan to revive Malcolm Turnbull’s national energy guarantee.

Much theorising has gone into explaining the record pre-poll turn-out, which had reached 915,000 people on Monday, vastly higher than the last federal poll in 2016.

The Coalition in particular is sweating the cause of this psephological phenomenon, amid speculation – much of it indistinguishable from wishful thinking – that voter keenness portends an electoral bloodbath for the Coalition.

This could be right, or it might be something else, such as the depressing reality of a campaign that is so dreadful to watch, it can be fully ignored once one’s duty has been discharged. The debates, for example, have been excruciating – two middle-aged men in suits trying not to lose.

Yet for all this, there have been significant optical differences between the two sides. Differences that amplify realities within each camp.

While Morrison has barely appeared before the cameras without a female Liberal candidate by his side, these women have mostly been political non-entities, unknown by voters beyond their own electorates.

The transparent aim has been to counter the hard truth that the Liberals have a women drought in their ranks – one of their own determined making. 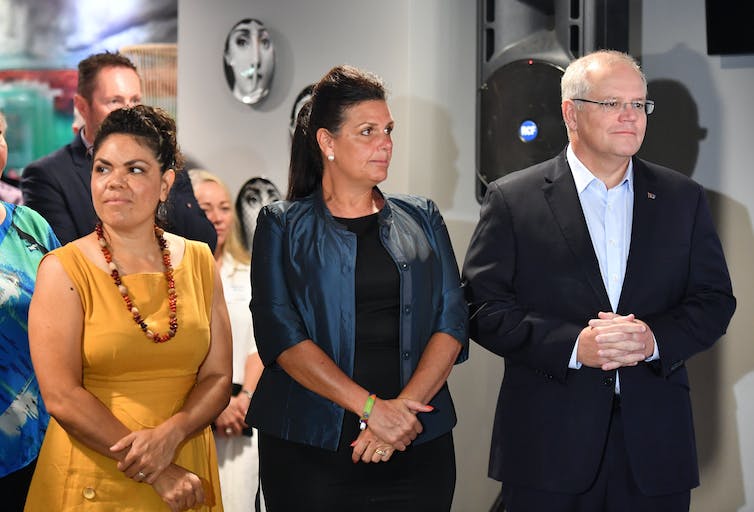 Read more: Quotas are not pretty but they work – Liberal women should insist on them

Julie Bishop’s relative absence in this campaign is profound, highlighting the unpalatable fact that the government’s most popular and trusted figure has quit after being ignored as a leadership option.

The associations are unpleasant: think J-Bish and you also think Turnbull, which leads quickly to turmoil, betrayal and to Tony Abbott.

On Labor’s side, the aim has been to underline this difference as visually as possible. 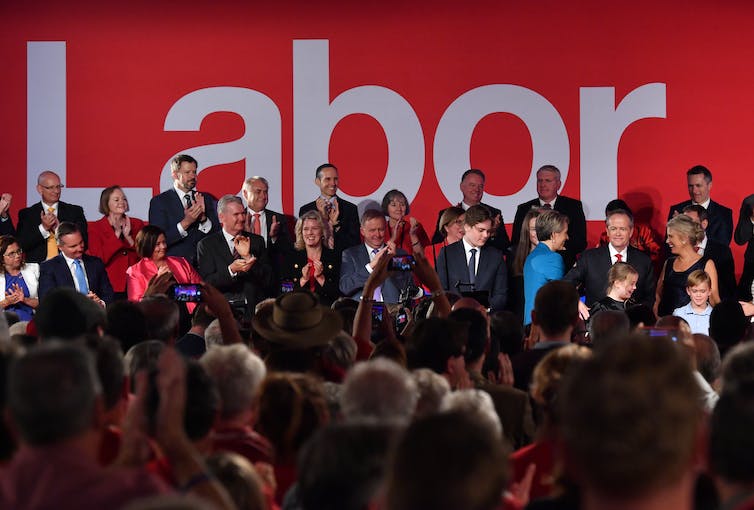 Labor putting the gender equity of its shadow ministery on display at the party’s election campaign launch. Darren England/AAP

If that didn’t make the point strongly enough, the entire Labor alternative cabinet was on stage for the event, arranged in the familiar boy-girl-boy-girl order – its 50-50 split as obvious as the squares on a chess board.

Images aren’t everything in this election, but given the absence of charisma and paucity of inspiring vision, the leaders are relying on them to send the right message.