Recent debates about prominent advertising in Melbourne and Sydney have highlighted public concerns about the commercialisation of public space. The sense that our cities have become increasingly vulnerable to commercial forces is premised on the assumption that advertising has no place in our cities.

However, historical images of our cities challenge this view. They reveal advertising and commercial signage to be an ever-present part of our cityscapes and urban life.

Read more: Digital media are changing the face of buildings, and urban policy needs to change with them

A recent controversy in Melbourne over a proposed billboard has echoes of 19th-century debates over billboards occupying prominent city sites. Projections of animated images onto the wall of 231 Swanston Street will turn it into one of the largest advertising billboards in the city. Described as a “mega-sized 305 square metre display”, its size is a key issue, but the controversy does not end there.

Melbourne City Council had at first rejected the sign, arguing:

[…] digital billboards beaming high-rotation advertisements into the public realm are creating an unprecedented level of visual clutter that detracts from our city streets.

Lumen Billboards challenged the decision through the Victorian Civil and Administrative Tribunal. VCAT upheld the appeal, deeming that the sign’s size and illumination was appropriate for the site and that it had little impact on the area’s heritage.

Some see VCAT’s decision as yet another example of big business overriding public interests. Writing in The Age, Nicola Philp attacked the perceived commercialisation of public space. Readers’ comments echoed her sentiments. One reader lamented:

Melbourne is becoming an advertisers [sic] paradise with gaudy flashing signs everywhere. The beauty and elegance that Melbourne once had is slowly being eroded.

Another took aim at advertising, fuming:

I hate the idea of more intrusive advertising being forced down our throats.

Concerns about the commercialisation of public space were similarly expressed in response to the use of the Sydney Opera House as a billboard to promote the Everest horse race last October. The Opera House’s chief executive opposed the highly controversial decision by the New South Wales government. More than 310,000 people signed a change.org petition against the decision.

Read more: View from The Hill: The uncivil Mr Jones

The use of the Opera House to promote a horse race triggered public protests. 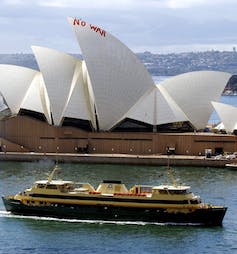 The Opera House sails were the site of an anti-war protest in 2003. Mick Tsikas/AAP

Such numbers did not deter the state government, which had several prominent figures supporting its decision. Among them was Prime Minister Scott Morrison, who described the iconic building as “the biggest billboard Sydney has”.

The PM’s crude description is, strictly speaking, correct. Despite its policy forbidding “logos, corporate identities or colours”, the Opera House sails have been regularly used for promotional purposes. Unofficially, it has also served as a canvas for various protest slogans. However, the Everest uproar was as much about commercial promotion as it was about the power of the city’s political elites.

Concern about commercialisation is an old one

Concerns about the commercialisation of city streets and landmarks are nothing new. In 1880, Brisbane’s Telegraph newspaper took aim at billboards “occupying two of the most prominent sites in the city”, labelling them “terrible eyesores”. Sydney’s lord mayor expressed similar sentiments in 1907 when he was reported as saying:

It was an outrage in a civilised community that every square inching of land abutting on the public streets should be made hideous by posters.

Significantly, one of the first items printed in Australia was a playbill from 1796 promoting a theatrical performance. Like government orders, the playbill and other commercial notices were posted in prominent locations in city streets. Retailers added their mark to city streets by employing signwriters to adorn their premises and promote their wares.

The significance and impact of such commercial signage was formally recognised in 1830, when the governor of New South Wales decreed that it was illegal to “keep up any Sign, Writing, Painting, or other Mark, on or near to his House or Premises” that falsely gave the impression a house was licensed.

As commerce duly grew, so too did the amount of advertising on city streets. By the early 20th century, commercial signs and advertisements were an entrenched and inescapable aspect of urban life. They permeated walls, hoardings and all parts of public transportation systems. Electricity and neon lighting extended outdoor advertising’s reach into the night-time hours.

In recent times, sports grounds have added another commercial layer by selling their naming rights. Melbourne’s Marvel Stadium has previously been known as Colonial Stadium, Telstra Dome and Etihad Stadium. More confusingly, Brisbane and Sydney have both been home to ANZ Stadium (formerly known as QE II and Stadium Australia/Telstra Stadium respectively).

And then there are the signs we love 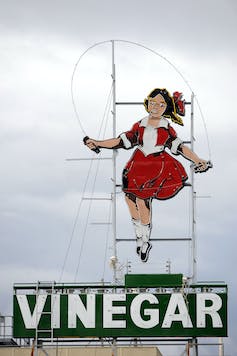 Our relationship with commercial signs is not static. Some signs have taken on a life of their own. The Coke sign in Sydney’s King’s Cross and the Skipping Girl in Melbourne’s Abbottsford have become a part of the respective cities’ cultural heritage.

The interest generated by the uncovering of a long-hidden “ghost sign” for Peapes menswear near Wynyard Station in Sydney similarly reveals that commercial signs and advertising are less utilitarian than critics suggest.

Commercial advertising is a part of our city’s fabric and heritage. While the VCAT decision certainly raises legitimate concerns about processes and the values we apply to public space, the approval of the giant billboard is entirely consistent with our past.

Whether or not we like it is, of course, a different question.