Classical plate tectonic theory was developed in the 1960s.

It proposed that the outer layer of our planet is made up of a small number of rigid plates separated by narrow boundaries. The surface of Earth could be viewed as a simple jigsaw puzzle with just nine large plates and a bunch of much smaller ones. 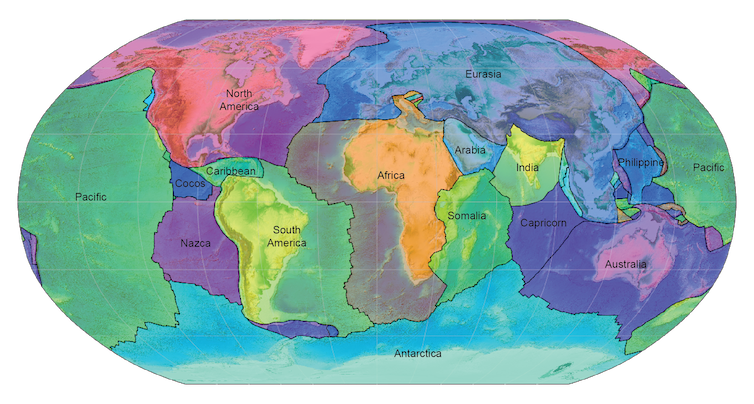 But what was glossed over when global plate tectonic models were first developed was the enormous deformation experienced by these seemingly rigid plates.

Fifty years after the plate tectonic revolution, we are pretty sure the continental parts of plates are not uniform, nor are they rigid. The giant forces that slowly move continents across the viscous mantle layer underneath, like biscuits gliding over a warm toffee ocean, stress the continents, and twist and contort the crust. This is a process that has taken place over millions of years.

As part of recent research, we worked with a team of international collaborators to build a computer model to show just how much the continents have been deformed since the Triassic Period, about 250 million years ago. The supercontinent Pangea began breaking apart soon after, ripping along the seams between Africa and North America.

Animation showing the motion of the tectonic plates and the associated evolution of deformation since the breakup of the Pangea supercontinent (Credit: Sabin Zahirovic).

We detail this new understanding of continent mangling in a paper published this month in the journal Tectonics.

A model of tectonic plates moving over the viscous mantle. Blue material represents plates that are being recycled into the hot interior of the Earth. Red material represents extra hot material rising from the Earth’s core. (Credit: Maelis Arnould, see https://agupubs.onlinelibrary.wiley.com/doi/abs/10.1029/2018GC007516)

We already knew that that colossal tectonic forces act along plate boundaries. We can see this when continents collide, such as when Africa collided with Eurasia, forming mountains like the Alps, or forming basins when continents are torn apart, as is happening in East Africa. 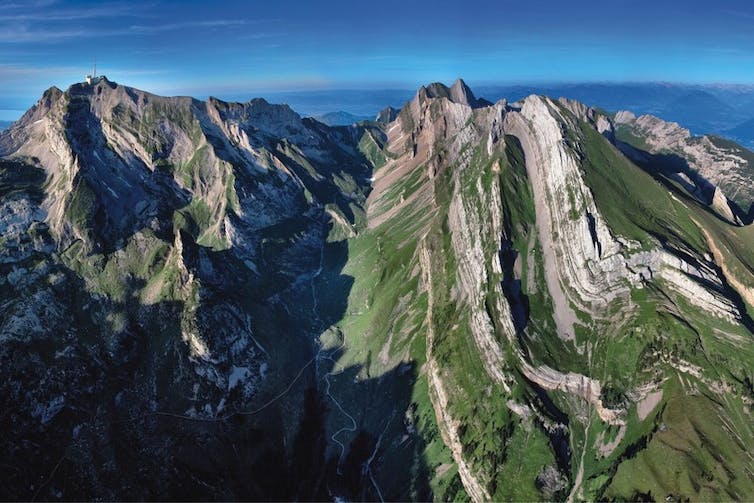 Folded marine sediments in the Alps (Helvetic Nappes of Switzerland), uplifted and deformed by the collision of the African and Eurasian continents. Kurt Stüwe, Author provided

Our new research used geological and geophysical data to pinpoint all major zones of continental deformation, built into a global model of plate motions using our GPlates software.

We show that at least one third of all continental crust has been massively deformed since Pangea first started breaking up. That’s a whopping 75 million km2, roughly the size of North and South America and Africa combined. 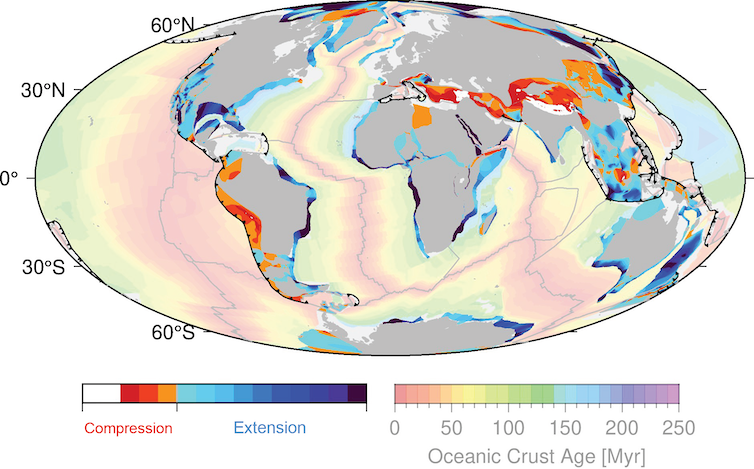 Present day map showing the areas that have undergone compression or extension during the past 250 million years. Sabin Zahirovic, Author provided

Deformed continental regions include large stretched and submerged continents like Zealandia, as well as crustal contraction where collisions have occurred, producing mountain belts such as the Himalayas, the European Alps, Iran’s Zagros Mountains and the southern Alps of New Zealand. 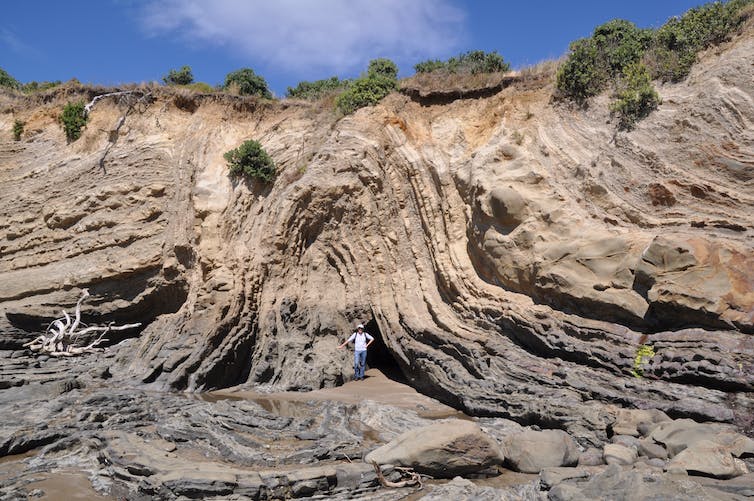 Folded marine sediments on the Whangaparaoa Peninsula north of Auckland, New Zealand, reflecting the formation of a convergent plate boundary in northern New Zealand in the beginning of the Miocene Period, around 23 million years ago. Adriana Dutkiewicz, Author provided

The cradle of humankind

When crust is being thinned and stretched, the crustal contortions are usually hidden away from view because they are quickly covered up by sediments. But there are exceptions.

The East African Rift valley is one of the most spectacular examples of crustal extension visible at the surface. It has not subsided below sea level because the region is being pushed up by a mantle plume, a large upwelling of hot molten material causing uplift and volcanism.

The rift valley is underlain by a giant fault system that is splitting Africa in two. The rift turned a flat landscape into one with 4km high mountains and lake basins with vegetation ranging from desert to cloud forest. This variety of surface environments paved the way for the early evolution and diversification of humans. 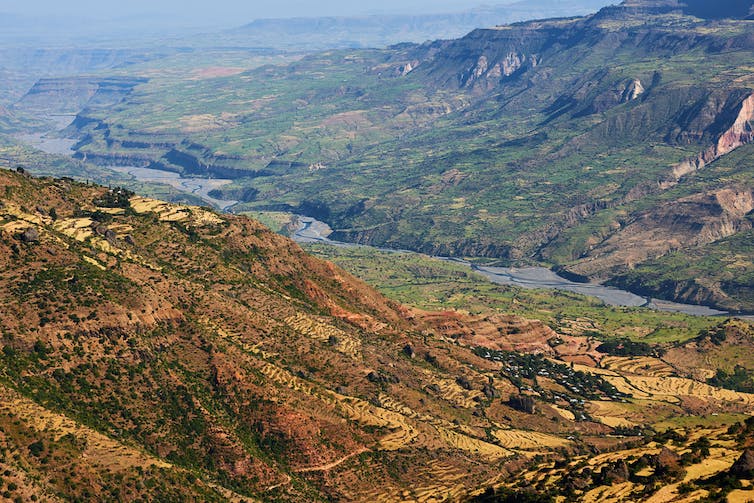 The Rift Valley was an important site for early evolution and diversification of humans. from www.shutterstock.com

Read more: Africa is splitting in two – here is why

The importance of stress

We may not like stress in our daily lives, but the continuous stress and strain acting on continents provides us with an important record of Earth’s history.

Modelling the patterns of continental deformation through time allows us to explore regional patterns of earthquakes and volcanism and explain dramatic changes in Earth’s climate over time.

It also provides a framework based on tectonic data to seek mineral resources such as the metals cobalt and tungsten, which are needed for a sustainable energy future.