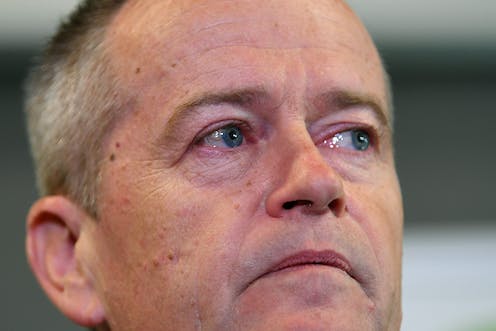 Although some could argue that Labor after the Rudd-Gillard years was in a deep mess and not fit to govern, such a headline was deeply partisan and far from neutral election campaign coverage. The Guardian’s Roy Greenslade said at the time of News Corp chief Rupert Murdoch:

There is not the slightest attempt to conceal his agenda. It is blatant, bold and belligerent. And it confirms yet again the way in which he links political interventions to his commercial desires.

Read more: FactCheck: does Murdoch own 70% of newspapers in Australia?

The similarities between Labor in 2013 and the Coalition in 2019 are uncanny. They have done the same number of replacements of sitting PMs (Labor 2010-2013: Rudd-Gillard-Rudd. Coalition 2015-2019: Abbott-Turnbull-Morrison). And both parties have suffered from disunity and division, although the Coalition is perhaps even more divided than Labor was in 2013 on core policy issues such as climate change.

And yet, we have seen no “Kick this mob out”-style headlines targeting the Coalition from News Corp Australia’s publications in this campaign. Instead, it’s been a steady drumbeat of one-sided, positive coverage (or convenient lack of scrutiny) of the Coalition’s candidates and policies, compared to a barrage of criticism of Labor and Bill Shorten.

News Corp’s campaign coverage so far confirms that growing partisanship in political reporting seem to have become increasingly entrenched in the organisation.

A case in point is The Daily Telegraph’s much-maligned front page story on Wednesday that implied Shorten hadn’t told the full story when describing his mother’s educational opportunities on Q&A earlier earlier in the week.

The article can only be described as an ultra-partisan hatchet job. Shorten called it a “new low”, while Kevin Rudd went so far as to compare News Corp with the People’s Daily newspaper in China on Twitter.

Interestingly, the Telegraph’s story on Shorten’s mother appears to have backfired, creating a huge social media moment – #myMum – devoted to people’s stories of their mothers.

But the article illustrates how damning it is for diversity and plurality when media ownership is as concentrated as it is in Australia, with News Corp being the dominant player by far. If the dominant outlet in such a media landscape decides to wholeheartedly back one side of politics, it will undoubtedly impact the tenor of a campaign and skew the information voters rely on to make up their minds.

It’s not good for a healthy democracy and a fair election campaign.

Backing one side of politics is nothing new for News Corp. There is plenty of empirical research spanning decades documenting how Murdoch’s media empire has sought to influence politics in Australia, the UK and the US. One of the most comprehensive and damning studies is David McKnight’s Rupert Murdoch: An Investigation of Political Power, which is a devastating read illustrating how Murdoch has used partisan journalism for decades to gain political influence benefiting the media empire’s financial bottom line.

Indeed, this is what Labor claims is the driver behind News Corp’s scathing coverage of its policies in this campaign. Deputy leader Tanya Plibersek and assistant treasury spokesman Andrew Leigh tied the partisan coverage to Murdoch’s desire to protect “tax loopholes” in Australia by keeping Labor out of power.

One of the case studies in McKnight’s work is News Corp’s undermining of climate science and meaningful action on climate change. This can also be seen in its coverage of the current Australia election campaign.

In spite of polls showing growing support in Australia for action on climate change (59%) and renewables (84%), the environment is still treated as a second- or third-tier election topic by most media (with the notable exceptions of Crikey and the Guardian). This is particularly the case with outlets owned by News Corp.

When climate change has been covered by News Corp in the campaign, it’s predominately been done in an alarmist way to slam Labor’s policies. For example, The Australian reported a week ago that Shorten’s climate policies aiming to reduce greenhouse gas emissions by 45% by 2030 could cost the country A$264 billion – a figure based on modelling by a former government economist that Shorten dismissed as “propaganda.”

Though notable climate experts and academics also disputed the estimate, it was widely repeated across News Corp’s other outlets.

Meanwhile, News Corp has asked few critical questions about the Coalition’s much less ambitious climate plan. Most importantly, hardly any coverage has been offered by the large legacy media outlets (such as the ABC, The Age and the Sydney Morning Herald) on seriously assessing the cost of inaction on climate change. (A study to track climate change coverage during the campaign is currently underway by myself and a colleague.)

Overall, the media coverage of climate change thus far can only be described as a failure (with a few exceptions). A failure of giving it enough prominence during debates, panel discussions and crucial press conferences. A failure of deeply scrutinising climate change policies from all parties.

The next generation has made it abundantly clear where it stands on the issue in school strikes and protests across the country. It’s time we all, including the media, start listening to them and give them a voice in the final week of election coverage.