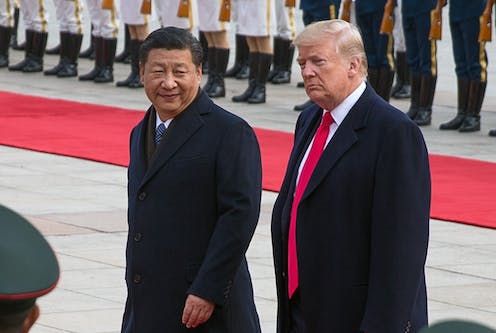 The Chinese have a saying attributed to the philosopher and writer Lao Tzu: every journey begins with a single step.

If that is the case, US-China relations have taken a step backwards in negotiators’ failure to advance trade negotiations in the latest round of talks in Washington, which ended unsatisfactorily.

China has said it is willing to resume discussions. The US has sent mixed messages, including a series of bombastic tweets from President Donald Trump warning of a worse deal if an agreement is not reached before the next presidential election.

Washington responded to the inability of the two sides to bridge their differences by raising tariffs on US$200 billion worth of Chinese imports to 25% from 10% already imposed.

The administration has threatened to extend tariff increases to virtually all Chinese imports. This would likely prompt a trade war.

Sharp differences remain over the wording of the trade agreement itself. Beijing regards the language as too harsh on intellectual property and trade secrets theft, forced technology transfers, competition policy, access to financial services, and currency manipulation.

China appears to have hardened its position on some of these issues in the course of the negotiations, after having earlier indicated more flexibility.

This does not augur well for an early resolution.

The US has also clearly resolved to increase pressure on China on other fronts, in what risks becoming deepening differences on a range of issues.

As trade negotiators convened in Washington two US warships sailed near disputed islands and island features claimed by China in the South China Sea. This is the third time this year the US has conducted freedom of navigation operations next to Chinese-claimed territory.

This comes in the wake of the US decision to ban the Chinese telecommunication communications equipment supplier, Huawei, from participating in the buildout of its 5G network.

US pressure led to three other members of the so-called “five eyes” security partnership, including Australia, to bar Huawei as well. Britain, alone among the “five eyes”, has agreed to allow the Chinese company to participate in non-core aspects of the 5G buildout.

This will be viewed in Beijing as an indication the US is using its economic weight to confront China more broadly and encourage its allies to follow suit.

US attempts to extradite the daughter of the founder of Huawei from Canada to face charges for breaching sanctions against Iran risk further souring relations.

While it would be premature to describe a messy pause in US-China trade negotiations as an inflexion moment in an increasingly complex relationship, it is unarguable that US-China relations have entered a new and more fractious phase.

What is unclear is whether a more overtly competitive relationship is bringing closer the day when the gloves really do come off in a way that threatens global harmony.

In any case, it seems clear a period of relative amity, during which the US and China sought to achieve a reasonable balance between an old and a new global order, is over.

Benn Steil, director of the international economics program at the Council on Foreign Relations, told Bloomberg that rivalry between the US and China for control of everything from global trade routes to cyberspace will drive the relationship for years to come.

“The heady era of global integration is gone,” Steil said.

This view may prove alarmist, but, on latest indications, overcoming trade and other differences between Washington and Beijing will be easier said than done.

Trump’s arrival in the White House, with a team of trade advisers who have made careers railing against China’s uncompetitive trade practices, has brought trading differences more sharply into focus.

Disputes over intellectual property, market access, alleged currency manipulation and a host of other trade issues have been present ever since China began its inexorable rise.

US politicians of left and right agitate against what’s perceived to be China’s mercantilist trade policies. This is blamed for American jobs draining away from the country’s manufacturing heartland.

Trump’s unhelpful response to the failure in Washington to achieve a breakthrough points to an uncertain conclusion to complex negotiations that would lay the foundation for a more stable relationship.

This contribution to the debate provides an indication of the extent to which US-China relations have become enmeshed in American domestic politics.

Presidential campaigns tend to expose sharper differences on trade as the two sides compete for votes in the American rust belt, where factory closures have killed off tens of thousands of jobs.

One of Trump’s boasts is that he has reversed this trend by encouraging American business to reinvest onshore and bring jobs home. But disruptions to trade have their costs.

Trump’s tariff war against China has hit American farmers hard as the Chinese have retaliated by seeking alternative markets for agricultural commodities such as soybeans.

In other words, China is not without an ability to strike back at US attempts to strong-arm it over trade.

In the end, a resolution of a damaging US-China trade dispute that risks broader damage to a global trading system will require the intervention of respective leaders, Trump and his Chinese counterpart, Xi Jinping. The two will meet in June at the Osaka G20 leaders’ summit.

What is complicating that scenario is that crude US attempts to ramp up pressure on Beijing may well prove counterproductive. In Chinese culture, the issue of “face” is important.

Xi will not want to lose “face” in negotiations with Trump by yielding ground unduly. As US academic Patrick Chovanec writes:

If we want China to embrace structural reform that requires real commitment – it’s not something we can just twist their arm to do, they have to buy into it.

When you basically strong-arm them into doing something they really don’t want to do, and they’re convinced it’s harmful to their interests, at some point they are going to cheat, push back, or scuttle it, it’s just a question of when, because they haven’t bought into it.