The author of this piece, Carmen Jacques, is available for a reader Q&A today (May 15) from 3-4pm AEST to take questions on this topic. Please post your questions in the comments below.

On October 12, 2002, a terrorist detonated a bomb inside Paddy’s Nightclub in Kuta, Bali. Seconds later, as people fled the club, a larger bomb was detonated outside the Sari Club. More than 200 people lost their lives, 88 of them Australian.

On the first anniversary of the Bali bombings, the idea to build a Peace Park on the site of the Sari Club was conceived by survivors, responders and the victims’ families. A few years later, the Bali Peace Park Association (BPPA) was founded in Perth with the aim of creating a permanent memorial at the site. It has maintained strong political support ever since, both at home and in Bali.

Despite this, the Sari Club site has remained an empty lot for the past 16 years. Recent negotiations to purchase the land from its owner have broken down, with the owner demanding A$4.9 million for the site itself, plus an additional A$9 million in compensation for predicted future financial losses. The BPPA have agreed to the land price, but are only offering compensation of A$500,000.

The Bali governor, Wayan Koster, cannot force the sale, but has offered the owner another parcel of land about 1.5km away and urged the owner to consider the relationship between Australia and Indonesia as a priority in the negotiations.

But a compromise now appears remote. Last week, the BPPA chairman David Napoli was told by the owners:

Either put in an offer to buy the land or we are closing the site and preparing for heavy equipment to come in.

Why the memorial has been contentious

From 2013-16, I was part of a research team studying how the proposed Bali Peace Park could become a site of collective resistance to terrorism.

During our research, we travelled to Bali and spoke to many community members and political supporters of the memorial, including the then-governor, Made Pastika. The local government has long supported the idea of a memorial at the site, but couldn’t build on the land itself since it is privately owned. Instead, Made Pastika put an embargo on commercial development of the site, while the BPPA negotiated with the owners to purchase the land.

Read more: Why refusing to build memorials for terror attacks is a bold political statement

Unfortunately, this embargo recently lapsed and the owners now want to build a five-story commercial complex at the site.

The Indonesian government did create a monument in between the old Paddy’s and the Sari Club site across the road, and it considers this enough. But the BPPA argues a Peace Park is needed because the design of the monument fails to say anything about the attacks. It only functions to remember the dead, not what actually happened on the day of the attacks, nor how or what we might learn from them. The BPPA wants the park to counter violent extremism by educating visitors about the attacks from a position of non-violence. 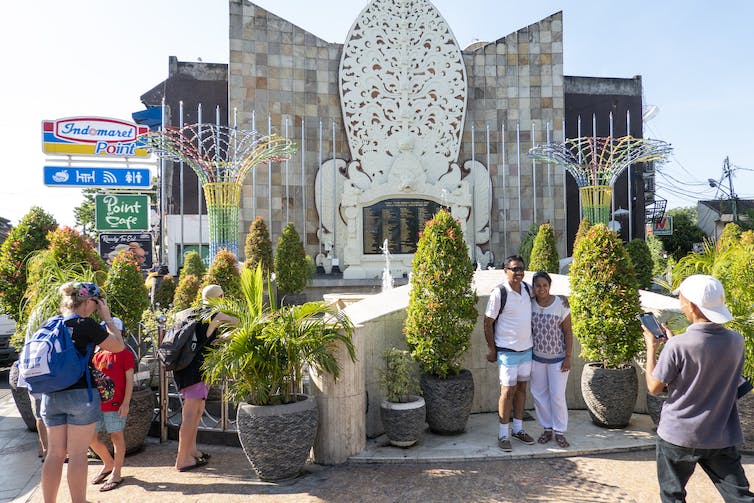 The current memorial near the site of the bombings in Kuta. Made Nagi/EPA

In our research, we also found there were significant cultural barriers to a memorial of this sort. Ancestor veneration is done at home in Bali and it is not local custom to otherwise memorialise the dead. The places where people die are “cleansed” by Hindu priests, allowing the spirits to return home. This means the ground is not considered sacred as it no longer contains the dead.

We were also told by one supporter of the park, Nyoman Jarna, that the Balinese prefer to “forget” disaster – they don’t want to be reminded of such tragedy. Bali is a place of happy holidays and its entire economy relies on this.

What memorials should do

In my view, the current monument erected by the government is static – it does not allow for any kind of deeper engagement with visitors. It stands on a small strip of land between the two bomb sites. It is too hot and exposed during the day for people to spend any real time there. At night, it is now closed to the public to prevent possible desecration by drunk tourists.

Anthropologist Katharina Schramm has argued that sites where violent acts have taken place are dynamic spaces that are constantly being reinterpreted through the memories of survivors, responders and other visitors. Reflecting on Ground Zero in New York where the September 11 attacks took place, social psychologist Eric Miller says memorials of this sort must provide future generations with an accurate representation of the devastation that occurred there.

Read more: Reclaiming our home away from home: the Bali bombings

A static monument does not adequately explain what happened. During our research, many of the tourists we spoke with had no idea what had occurred at the site of the current monument in Bali and regularly asked us what it was for.

Memorials that have achieved a deeper engagement – such as the Vietnam Veterans Memorial in Washington, the Oklahoma City National Memorial and Museum, and the 9/11 Memorial and Museum in New York – create a space for reflection and conversations with the dead. They also tell a story about what happened.

In my research, Gill Hicks, a survivor of the 2005 London terror attacks and now a prominent peace activist, told me:

Memorials like the one at Ground Zero should respect the lives lost and focus on ‘whatever happened’, as the victims didn’t deserve to die such a horrific death.

This is what many people in Bali told me is important to them. Maria Katronikas, who lost her bridal party, two sisters and two cousins during her honeymoon said:

I know how happy the girls were when I left them, I know what mood they were in, this is where they took last breath.

And Kevin Paltridge, who lost his son, Corey, told me:

As the fight over the Sari Club site continues in Bali, it’s worth keeping in mind the significance of places of remembrance. The way in which we memorialise the sites of terror attacks is particularly important because, as a society, we have a responsibility to the dead – and the living – to remember what happened.

If the BPPA succeeds in purchasing the land, the next challenge will be to create a peaceful place like this within the chaos of Kuta – a shady space for reflection and peace, which speaks to a future without terrorism.