The Coalition has promised to create 80,000 new apprenticeships in areas of skills shortages if it wins the election. Most skilled trades (such as motor mechanics, panel beaters, carpenters, automotive electricians, plumbers, hairdressers) have recently been in shortage.

The Coalition aims to reduce the shortages through doubling employer incentive payments, making cash payments to apprentices and creating training hubs in regional areas and other areas of need.

It’s clear trade apprentices and associated skills shortages are a central concern of both parties. But it’s not clear providing incentives is the best way to handle the issue, as history shows government incentives to employers have made little difference to the (mostly male) trade apprenticeship numbers.

Difference between apprentice and trainee

In considering the policies of both parties, it’s important to understand the differences between longer-term trade apprenticeships and shorter-term traineeships.

An apprentice, in the narrow use of the word, is contracted in a trade such as that of an electrician, carpenter, chef or hairdresser. An apprenticeship can take up to four years to complete. Trade apprentices make up a small proportion of the vocational education and training sector – around 14% of all government funded vocational students.

Many of the main trades frequently appear on the skills shortage list. Shortages are seen to inhibit productivity in industries and the broader economy.

Read more: Don’t be too quick to dismiss ‘dying trades’, those skills are still in demand

Traineeships were established in the late 1980s to provide apprentice-type training for young people in non-trade occupations such as sales and clerical, and many of the care occupations including disability and aged care.

Traineeships usually take one to two years to complete, much shorter than trade apprenticeships.

Together with the introduction of a low training wage for trainees, the incentives led to a rapid expansion in the numbers of trainees in the late 1990s and to new training modes including fully on-the-job training. There was a sharp increase in the number of training organisations as employers were allowed to choose a private or public provider for off-the-job training (often one day a week). 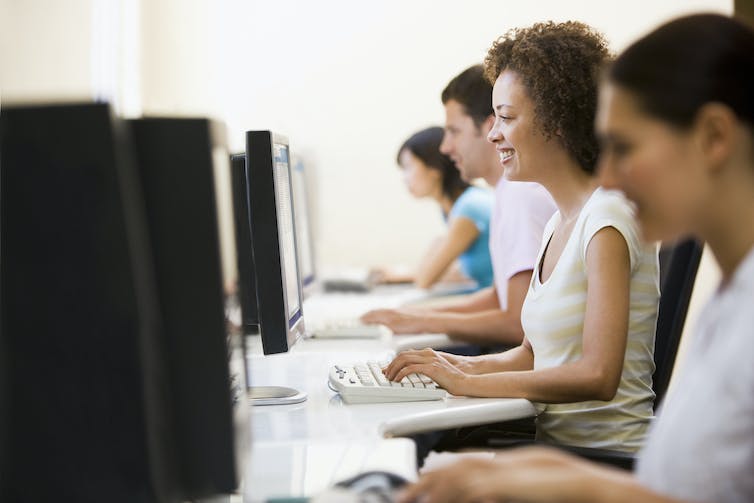 Traineeships are different from apprenticeships, and are usually in non-trades such as clerical occupations. from shutterstock.com

A 1999 review into the system found some firms were using traineeships as a source of wage subsidies and, in many instances, provided little training to the trainees. For some, the skills acquired were not valued by employers over general work experience obtained during the traineeship. And the issue continued into the next decade.

In 2011, an expert panel noted Australia was the only country that paid government incentives, on a large scale, to employers of apprentices and trainees. The panel reported research that showed incentives paid to employers for the shorter traineeships represented a significant part of the wage costs (in some cases about 20%) and contributed to the large increase in trainee numbers.

Read more: There is no apprenticeships 'crisis' in Australia

The expert panel suggested the government would be better to confine its payments to programs that added value to the economy, such as those in community services, health and information technology.

The panel also recommended the government not give funds directly as incentives to employers. Instead, both employers and government would pay into an employer contribution scheme. Employers who met benchmarks such as a strong induction process and effective mentoring would have their contribution rebated, either in part or in full.

These recommendations were particularly aimed at the non-completion rates of apprentices – on average less than half complete their apprenticeships with their first employer. The most common reason given is dissatisfaction with the employment experience including difficulties with employers or colleagues.

The government at the time didn’t take up the recommendation of an employer contribution scheme. It retained incentives for apprenticeships in trades on the national skills needs list such as construction and telecommunications, and for traineeships in priority occupations in aged care, childcare, disability care and nursing.

It abolished incentives for existing workers in other traineeships. Together with cuts in state subsidies to the providers of off-the-job training in some courses, these changes led to a large fall in traineeship numbers.

For example, by 2018, traineeships in clerical and sales had fallen by more than 70% from 2012. Older and female workers were most affected.

But the numbers of starting apprenticeships in trades in the last ten years in the largest three groups – construction trades, automotive and engineering, and electrotechnology and telecommunications – is virtually unchanged. And a fall in automotive was offset by increases in the others.

These results were largely in keeping with intentions of the expert panel in 2011.

The available research shows electrotechnology and telecommunications trades and construction trades graduates are relatively well paid, while hairdressers are the worst paid.

Trade apprentices are already the best-supported VET students during training. They can access trade support loans of up to $20,000 over four years – with a 20% discount of the debt on completion. Apprentices can receive allowances for living away from home, and the government provides support for adult apprentices as well as rural and regional skills shortage incentives.

Employment of apprentices and their mentoring is assisted by the Australian Apprenticeship Support Network, at an annual cost of nearly A$200 million.

State governments also provide additional support for employers and apprentices. For instance, Queensland has a program including schemes aimed at the unemployed. Western Australia has announced the provision of employer incentives in its 2019 budget. NSW has abolished tuition fees for apprenticeships.

The review should revisit the advice of the 2011 expert panel and ideally, should be conducted in the context of a review all tertiary funding (similar to what Labor is proposing).

Read more: VET needs support to rebuild its role in getting disadvantaged groups into education and work