Some voters heading to the polls this weekend may be casting their ballot with biodiversity in mind, after a major UN report released last week highlighted the global extinction crisis facing more than a million species.

Australia is an extinction hotspot: we are second only to Indonesia when it comes to biodiversity loss and we have had far more mammal species go extinct than any other country over the past 200 years. Conservation spending for threatened species recovery in Australia is woefully inadequate.

However a recent survey commissioned by WWF Australia found 89% of Australians agree we should invest in restoring wildlife habitats and natural places, and 68% of Australians believe a healthy environment and a prosperous economy go hand-in-hand.

So how should you cast your vote if you’re one of the many Australians who care about biodiveristy loss?

We’ve analysed policies, new investments, new initiatives and reforms from the Coalition, the Australian Labor Party, the Greens, One Nation, the United Australia Party, the Animal Justice Party and the Shooters, Fishers and Farmers Party.

We took these figures from party websites and policy statements, and where possible contacted party representatives directly to confirm. 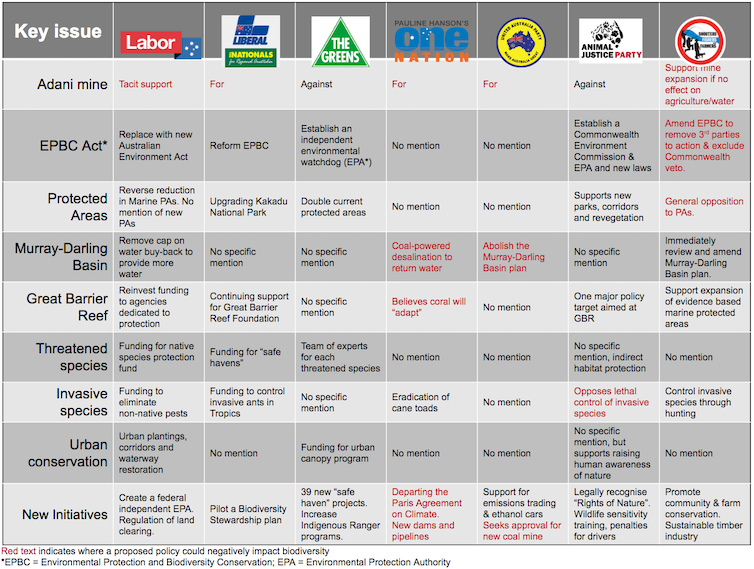 The Coalition, if returned to government, has proposed a budget of A$1.19 billion over the next four years, which includes A$100 million for new biodiversity programming. Their proposed budget for agriculture includes an additional A$30 million for a pilot biodiversity agricultural stewardship program.

Despite highlighting new funding for watershed restoration, the Coalition does not explicitly call for funding directed at the Murray-Darling restoration.

The Australian Labor Party has committed to invest $600 million in new environmental programs over the next four years, and will reallocate the $400 million currently committed to the Great Barrier Reef fund to public agencies dedicated to reef protection.

Pauline Hanson’s One Nation advocates a departure from the Paris Agreement, and contends that the Great Barrier Reef will adapt to a warmer climate – pointing instead to Crown-of-Thorns Starfish and Tropical Cyclones as key issues.

Perhaps most significantly for the diverse ecosystems of the Top End, the party advocates constructing dams in monsoonal regions of North Queensland to provide water to farmers in the Murray-Darling region. They also propose to eradicate cane toads. Costings are not provided.

The United Australia Party has no formal policies regarding biodiversity conservation, but advocates for several economic policies which have likely negative biodiversity implications.

Despite its commitment to meeting the Kyoto Protocol targets via investment in renewable fuels and advocacy for an emissions trading scheme, the party supports continuing exploitation of mineral resources (mining) in Queensland and Western Australia, including supporting the controversial Adani mine and construction of a new Alpha North Coal Mine in the Galilee Basin. No costings for these policies were indicated.

Read more: Why Adani's finch plan was rejected, and what comes next

The Greens have committed to a A$2 billion (per annum) Nature Fund to protect and restore biodiversity across Australia. This plan aims to recover every threatened species through the creation of new havens, invasive species control and fire management.

Their initiates include doubling protected areas, increasing the number of Indigenous Rangers, and incentivising private land conservation. In addition, the Greens have committed to reform our current nature laws.

The Animal Justice Party has many broad policies directly related to biodiversity and wildlife, and are pushing for clean energy infrastructure.

Read more: We must rip up our environmental laws to address the extinction crisis

Policies include land acquisition and habitat restoration and protection, strict penalties for harm to wildlife and an active stance against lethal control on invasive species. They will also encourage wildlife ecotourism, wildlife-sensitive education and investing in technology to reduce wildlife-human conflicts. They specify no costs for any of their policies.

The Shooters Fishers and Farmers party promotes sustainable land use for farming and recreation, rather than “locking it away” for conservation. They express support for individual, community, and farm-based conservation programs if they do not impact recreational use.

However, their proposed expansions of recreational use of public conservation land (such as expanding park tracks, private game reserves and fishing) could negatively impact biodiversity. There are no expenditure details specified for these policies.

The figure below summarises the total budget spend across the four-year electoral cycle proposed by each of the parties. 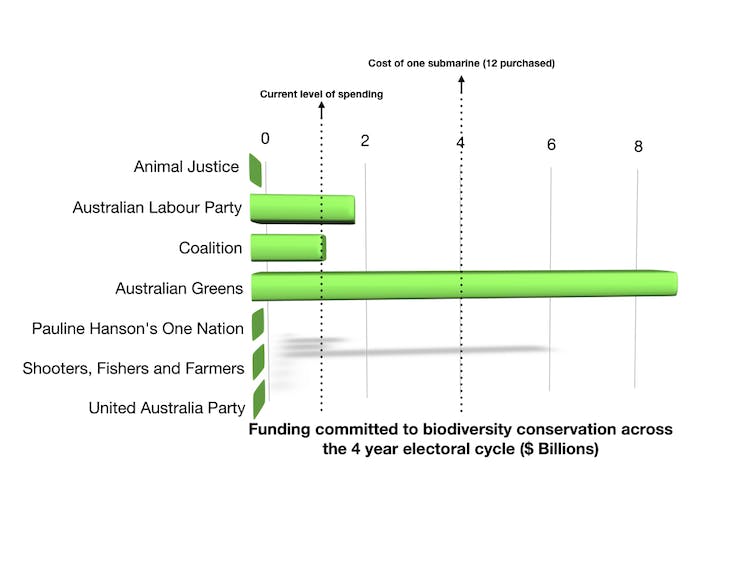 RMIT What about Adani? As the biodiversity issue that has received the most attention this election campaign, readers may be interested on where the parties stand on the Adani development. Read more: Interactive: Everything you need to know about Adani – from cost, environmental impact and jobs to its possible future While the Shooters, Fishers and Farmers party have not commented specifically on the issue, the Coalition actively supports the development of the mine, as does One Nation and the United Australia Party (Clive Palmer is keen to open another big mine next to Adani). Labor has committed to not reviewing the approval, which amounts to tacit support. The Greens and the Animal Justice Party are the only parties actively opposing the mine. If we want to improve our depressing record of species extinctions in Australia, urgent action is needed. There appear to be substantial differences between initiatives, reforms and investment proposed by all of the parties you could vote for on Saturday. While the details of initiatives and reforms can be difficult to interpret, international research has shown investment has a direct impact on biodiversity. In other words, the more we spend, the fewer extinctions. On this measure, the Greens are easily in front. And don’t forget that with preferential voting, you are able to vote for your first preference without wasting your vote. The authors would like to acknowledge the contribution of Thami Croeser to this article.