Australia’s major political parties fall into two broad camps on these issues. The Labor party is spruiking policies that control emissions and move towards renewables, consistent with its rhetoric about taking on the “top end of town” – including the mining industry.

In the Liberal-National view, concerns about energy and the environment are attacks on the businesses that deliver Australia’s prosperity. Moving away from coal towards renewables is typical of an opposition that has neither the ability nor inclination to support a thriving economy and control government finances: all symptomatic of the “Bill Australia can’t afford”.

But are Australians really that divided? Between April 29 and May 3, 2019, we asked 1,170 people about their attitudes and behaviours, including questions about voting intentions for those respondents eligible to vote in the upcoming election.

We wanted to know how our respondents intended to vote. How did that correlate with their attitudes towards climate change, and policies around energy and the environment?

We asked respondents to rate various statements about their behaviour and attitudes on a Likert five-point scale, where 1 means “strongly agree” and 5 means “strongly disagree”.

These statements included eight questions about attitudes towards climate change, and five questions on various policies (a tax on carbon, an emissions trading scheme, business incentives for carbon-neutral production, and regulation of mining and plastic use).

We also asked respondents to rate the importance of the broad statement: “How important is it for the government to implement policies to address environmental damage and climate change?”

(Note: the main purpose of the survey was to explore people’s likely choices about smart meters. In common with any survey, there may be many sources of sampling bias. Our survey was not designed to be a representative sample of political constituencies, and so is not an attempt to predict the election outcome.) 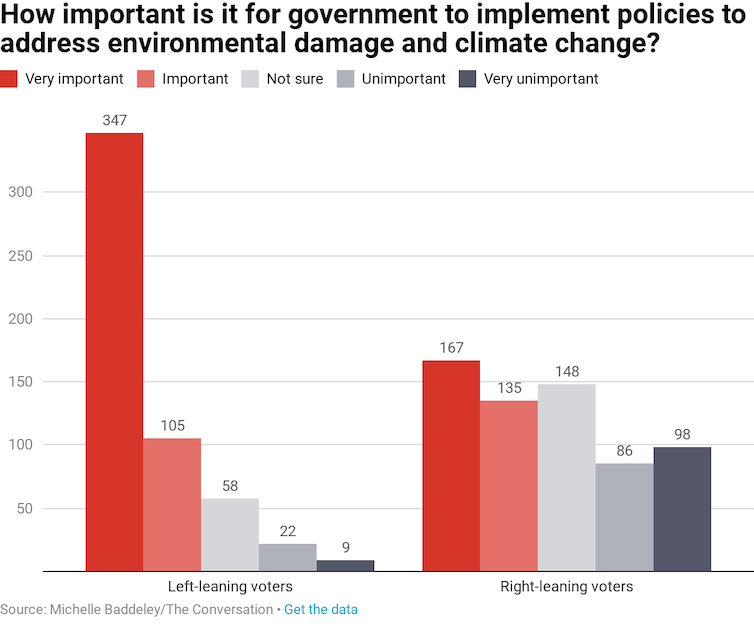 Then we divided the responses roughly into the two “camps” – Liberal-affiliated and Labour-affiliated – excluding the 14 responses for people intending to vote for the Centre Alliance. This gave us 635 right-leaning voters and 541 left-leaning voters. Perhaps surprisingly, we discovered a lot of agreement across the right- and left-leaning camps. On average, our respondents agreed about their commitment to recycling and also with the statement “I think it’s important that households do their bit for the environment”. 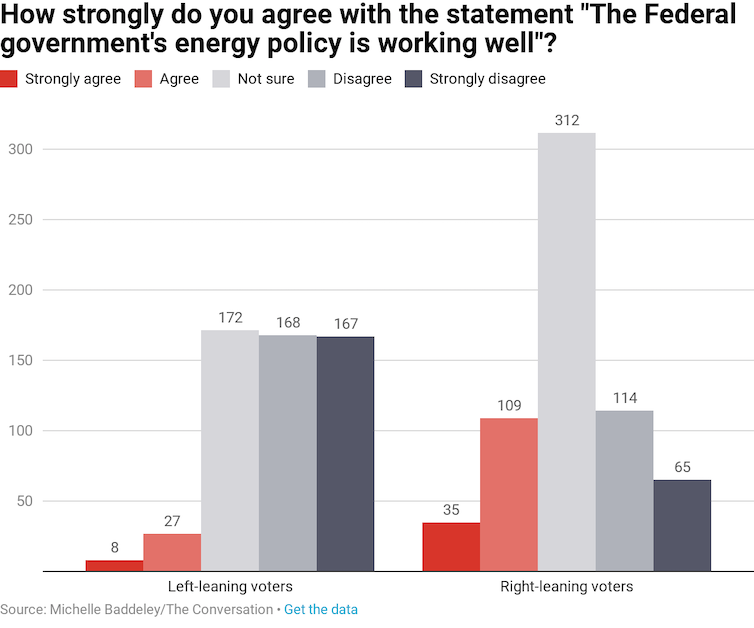 In terms of their attitudes towards conserving energy, both camps agreed that conserving energy was important because they want to control their energy bills. The left-leaning camp had no strong opinions about conserving energy to help limit climate change; the right-leaning camp disagreed that they would conserve energy because of climate change. Read more: Carry-over credits and carbon offsets are hot topics this election – but what do they actually mean? This suggests that – for the broadest impact – demand-side management policies should focus on how households can save money by conserving energy – and smart meters could be a key ingredient in this strategy. Behavioural tools are likely to be important too and smart meters have capabilities to combine economic incentives and behavioural motivators, as we’ve explored in previous research into behavioural insights for encouraging energy savings. 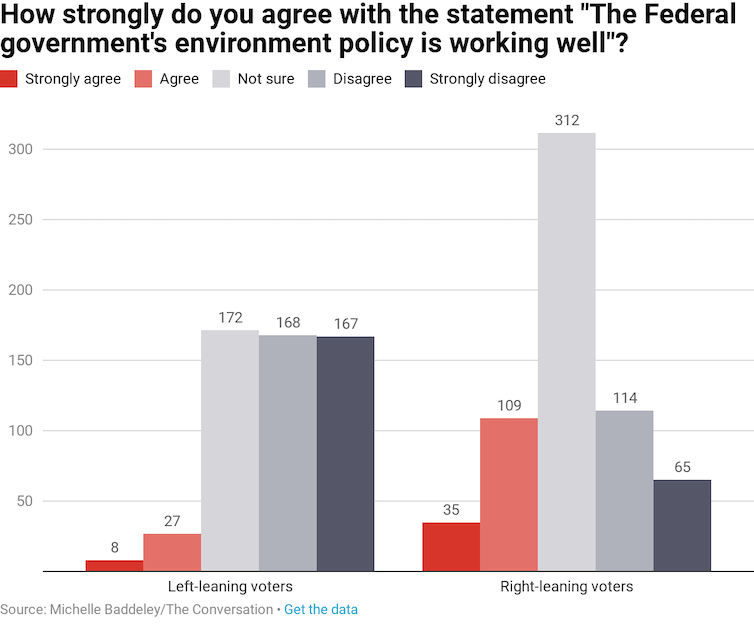 Both camps agreed that businesses should be given incentives towards carbon-neutral production. They disagreed that current government policies were good policies. So there is a strong appetite for policy change. Neither camp had strong opinions about carbon tax or emissions trading policies. Perhaps this is because debates around these policies are old news from the Gillard-Rudd-Abbott era, or perhaps most people just aren’t sure what these policies would mean for them personally. There were still areas of disagreement. The left-leaning camp had generally stronger opinions about climate change, agreeing that environmental damage and climate change are problems. The right-leaning camp on average neither agrees nor disagrees that these are problems. 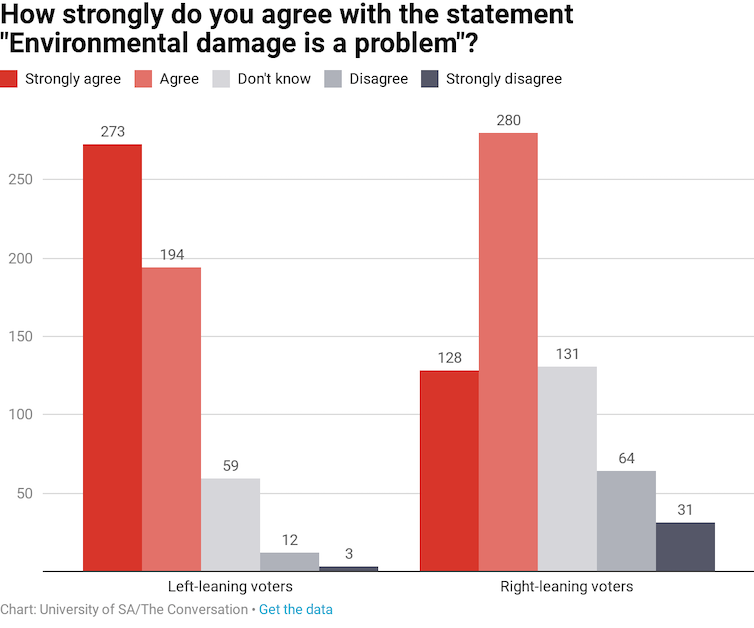 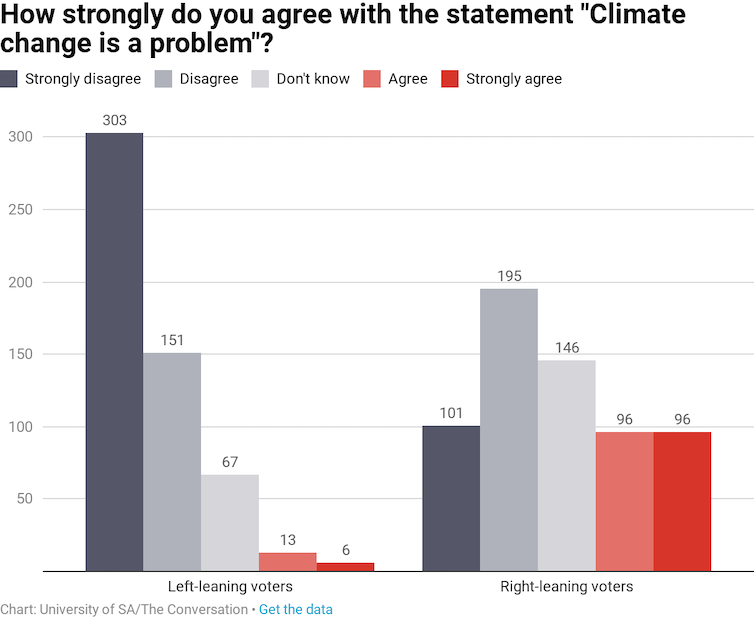 The left-leaning camp tends to agree that the government should introduce policies to regulate plastics and mining – unsurprising given that this camp includes a substantial number of people intending to vote Green. The right-leaning camp was neutral on these issues. Read more: Compare the pair: key policy offerings from Labor and the Coalition in the 2019 federal election Overall, this survey suggests more consensus across Australian voters than politicians might like us to believe. Once the election is over, and there is no more political mileage to be had from the mud-slinging that has characterised this campaign, then perhaps we can hope our political leaders will start expending some energy on judiciously analysing and assessing the policy challenges ahead. This will be essential if we are to come up with policies to mitigate climate change and environmental damage, whilst also ensuring Australia’s jobs, wages and prosperity.