Pregnancy, labour and delivery are incredibly physically demanding for women. But birth is no walk in the park for the baby either.

A new paper reveals just how much a baby’s head is pushed and distorted by vaginal delivery.

By recording MRI scans before and during labour, the researchers show the degree to which a baby’s skull bones ride over each other, allowing the whole skull to morph. The baby’s head becomes a sugarloaf shape – an elongated cone, with a rounded tip at one end – to get through the pelvis. The brain itself changes form as this happens too. 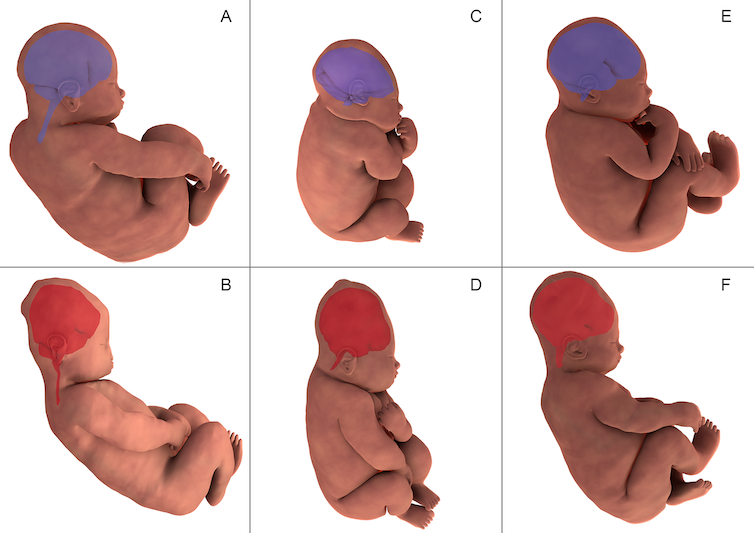 Three-dimensional fetal brain MRI reconstruction shows the shape of a baby’s brain before labor (purple in A, C, E) and during the second stage of labor (orange in B, D, F). Olivier Amie and co-authors, CC BY

Head compression is just one of the many incredible physical changes that takes place in infants during birth. Babies undergo a massive transition during labour and delivery as they move from the supported environment of the uterus to independent existence.

Many body systems change to do this. Some have already been in transition. For example, urine output from the fetus contributes to the amniotic fluid (the liquid that surrounds the baby) in the later part of pregnancy. Other organs require a sudden change in the first few moments after delivery, such as expansion of the lungs.

These biological events are vital to maximise chances of survival in the first few minutes “outside”. But surprisingly, we are still learning many of the details.

Read more: Health Check: how long should I wait between pregnancies?

Before the baby is born, blood goes through the placenta to get rid of waste and to pick up oxygen and nutrients that come from the mother. The developing baby manages on relatively low oxygen levels while in the uterus.

After birth the child is exposed to suddenly higher (potentially dangerous) oxygen levels. This shift requires different ways to protect the newborn – so the baby has systems ramped up to cope with this sudden flood of oxygen. Mild jaundice, a temporary yellowing of the skin resulting from a delay in liver enzymes kicking in, may be one such protective mechanism seen in many infants.

Physical changes plus shifts in biology and chemistry of the body’s systems are required to cope with the outside world. 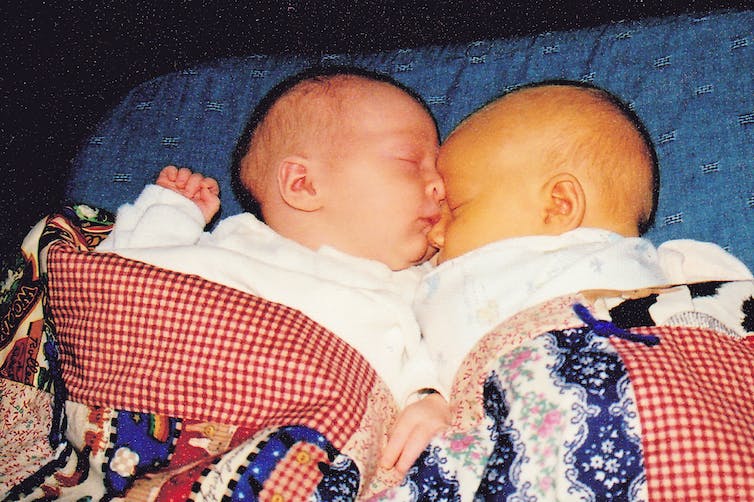 The baby on the right has jaundice. rubyturquoise/flickr, CC BY

Before birth, most of the baby’s blood circulation passes through the placenta, but bypasses the lungs.

After delivery, the placental flow stops. Instead of going from the baby’s heart to the placenta, the blood from the heart needs to redirect through the newly expanded lungs.

New research helps us understand the relationship between baby’s first breaths and the expansion of lung blood flow.

Understanding these processes in the first few minutes guides us in knowing when exactly to clamp the umbilical cord, and to time any breathing help needed for sick or premature newborns. 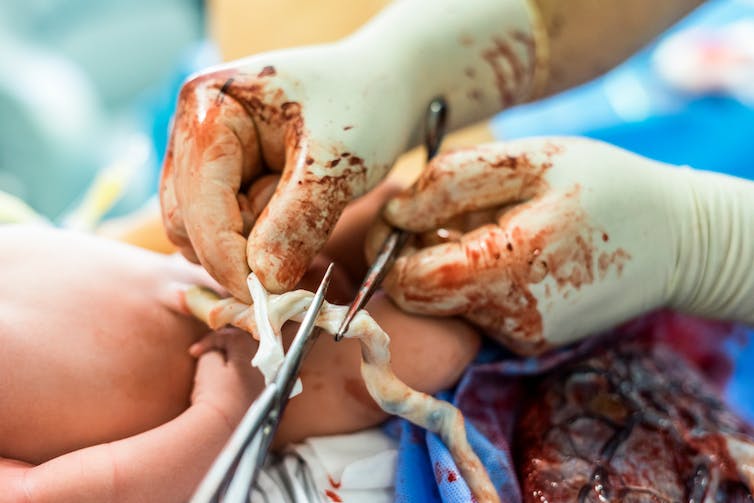 Once born, the baby must take over many of the biological processes the placenta performed during pregnancy. from www.shutterstock.com

It doesn’t always go to plan

The many changes a baby needs to be ready for delivery do not always have a chance to take place.

For example, if a baby is born prematurely then some or all of these adaptations may not have occurred.

Premature babies may have trouble opening up their lungs, or they may not close off the relevant bits of “plumbing” to redirect blood flow to the lungs. Or they may have difficulty exchanging oxygen and other gases in the lungs.

Other body systems such as skin, guts and the body’s chemistry systems may also be relatively unprepared.

Despite this, all but the most premature of babies benefit from the boost of labour if possible. The changes associated with the onset of labour, particularly inflammation, trigger the biological signals that tell a baby to get ready for being born.

Surprisingly, even a small deviation from normal, full-term (around 40 weeks) timing of labour may have effects.

Babies born by caesarean section without labour do not transition to the outside world as smoothly as those where labour has commenced. They have a higher rate of admission to neonatal units for respiratory problems, even after adjusting for other risk factors. Every week earlier than delivery at 40 weeks roughly doubles the risk of neonatal unit admission for babies. 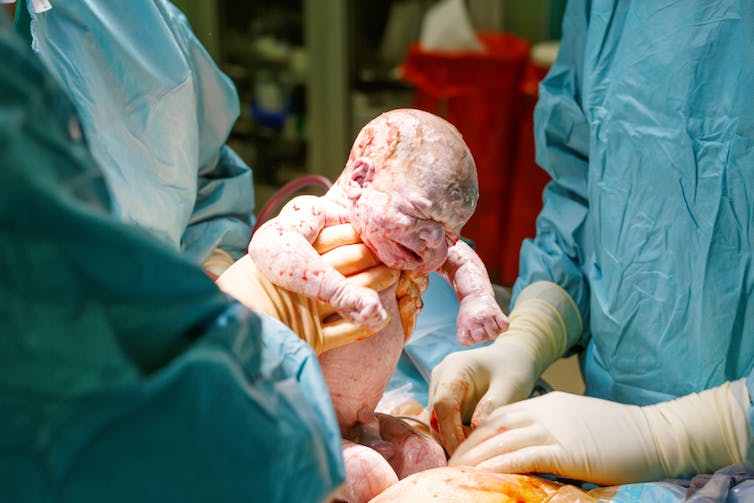 Birth by caesarian section is an entirely different biological experience for the baby – and may have some health consequences. from www.shutterstock.com

Current recommendations for birth timing are to balance the risks of delivery with these immaturity risks, and not deliver too early unless it is medically required.

Some of these effects can be altered by steroids. Steroids are made naturally by our bodies, including in babies. Also referred to as “the body’s stress hormones”, these are particularly important in making sure lung maturity happens at birth.

Sometimes steroids given to the mother can trick the baby into “preparing an escape plan” and getting lungs ready for delivery before term.

Independent of mild prematurity, researchers are looking closely to determine if there are any long term health and developmental effects of being born by caesarean section, without the process of labour and delivery.

Read more: Explainer: what is pre-eclampsia, and how does it affect mums and babies?

But why do we have such a high-risk delivery system, one where the baby has to actually deform its skull to be born?

Humans are defined by our brains. In our species, the process of evolution has been a balancing act, where brain size and maturity have been weighed up (in terms of survival) against the risk of obstruction in labour.

Human babies are relatively immature compared with some of our close primate relatives, but we cannot safely achieve more brain growth before delivery. For us, this extra growth has to occur over the first year or so after birth. 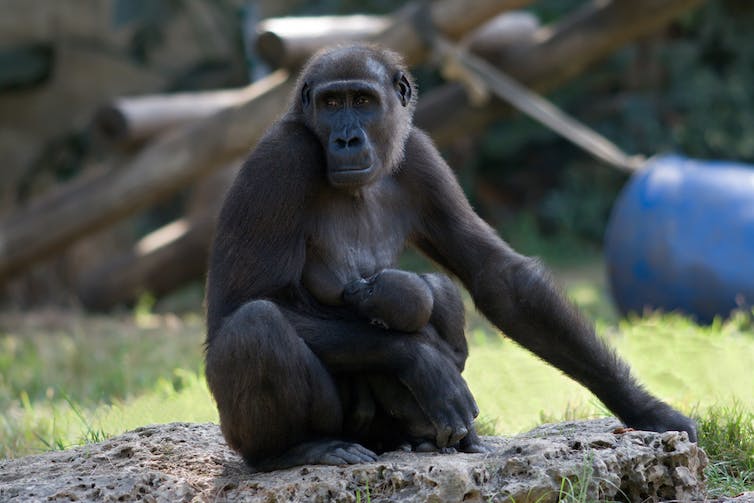 Gorillas and other primates give birth to babies that are much more developmentally advanced than human babies. from www.shutterstock.com

In addition, because we walk upright, this has created a tilt in our pelvis which narrows the birth canal (the gap in the bones of the pelvis through which the baby has to pass).

Birth is still risky. Globally, obstructed labour is still a significant cause of both mother and baby deaths, and a major cause of long-term incontinence disabilities in mothers that do survive. This tightrope we humans walk between head size and the potential of terrible mother and baby outcomes is essentially the driver for the existence of modern obstetrics.

We hope that more research aimed at understanding the balance of those risks, plus looking at how babies transition from uterus to the outside world, will help us better manage safe birthing. This will improve immediate and long-term health for mothers and their babies.