In the first edition of On the Origin of Species, Charles Darwin mentions dogs 54 times. He does so mainly because the extraordinary variation between dog breeds provides a marvellous illustration of the power of selection. For most of the roughly 15,000 years since their domestication, dogs were selected by humans for their usefulness as hunters, retrievers, herders, guards or companions.

As modern breeds became recognisable, the extent to which a dog aligned with the expected shape, size and coat for its breed (known as “conformation”) became more important. So important, in fact, that just a few years before On the Origin of Species hit the bookshops, the world’s first conformation-based dog show was held in the Town Hall of Newcastle-upon-Tyne in England.

By 1873, the UK Kennel Club was formed to, among other things, regulate the showing and breeding of dogs. Similar organisations soon followed in other countries. The criteria for judging and breeding for conformation were formalised in breed standards that are now administered by kennel clubs around the world.

Unfortunately, breeding for the standard in some breeds resulted in serious compromises to health and welfare, especially in cases where the wording of the standard encouraged exaggeration of certain features. 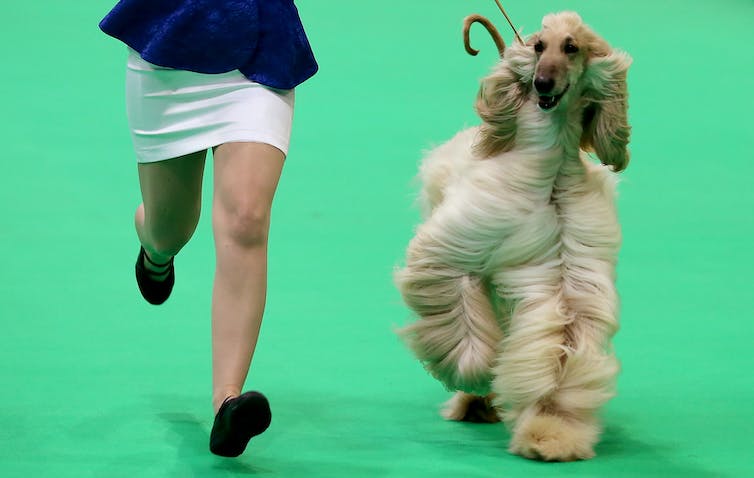 An Afghan Hound on show during the annual Crufts Dog Show at the NEC Arena in Birmingham, Britain, 7 March 2019. EPA/Nigel Roddis

Breeds to watch out for

The Kennel Club Breed Watch has highlighted roughly 15% of breeds as having “breed-specific conformational issues which may lead to health problems” and a further 4% of breeds in which “some dogs have visible conditions or exaggerations that can cause pain or discomfort”.

Fortunately, there is now global coordination in addressing these issues. The International Partnership For Dogs (IPFD) which works with many of the world’s leading breed-regulating organisations, is highlighting “extremes of conformation”.

All inherited disorders (and all desirable inherited traits) are, in essence, the result of random mutations in DNA that have occurred and continue to occur in all species. 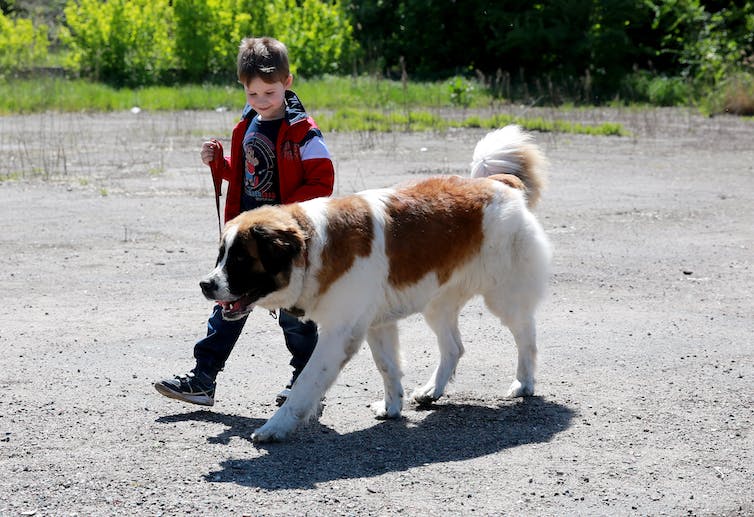 A boy leads a St. Bernard at a dog show in Bishkek, Kyrgyzstan, 05 May 2019. The International Kennel Club Dog Show was held in Bishkek. EPA/IGOR KOVALENKO

The number of known inherited disorders varies enormously among species, mainly reflecting the extent of research effort. For example, the number of single-gene disorders documented in humans is more than 5,300, whereas the figure for dogs is fewer than 300. As many of the inherited disorders that occur in humans could also occur in dogs, the present number for dogs is likely to be just the tip of the iceberg.

A global research effort is providing an ever-increasing number of DNA tests for known canine inherited disorders, enabling (in many cases) elimination of the disorder. National kennel clubs provide useful guidance on testing and public access to test results on individual dogs. The IPFD provides global information for breeders on the harmonisation of genetic testing for inherited disorders in dogs.

One of us, Paul McGreevy, has been part of an international team that developed a risk-assessment criterion for determining priorities for research and control of inherited disorders. A major component of this score is the prevalence of a disorder in a particular breed. 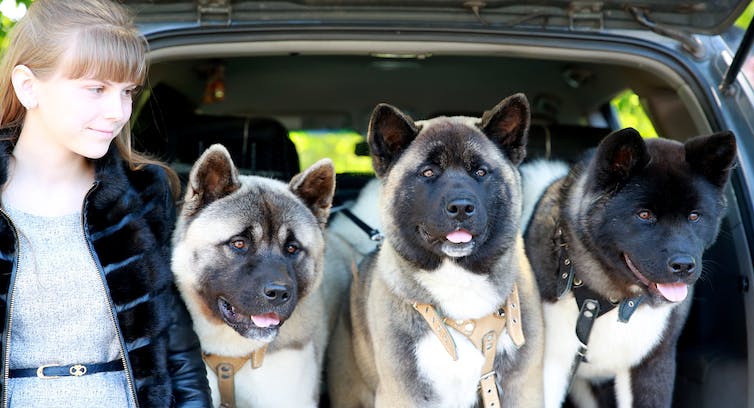 American Akita dogs waiting for their turn to be judged at a dog show in Bishkek, Kyrgyzstan, 05 May 2019. The International Kennel Club Dog Show was held in Bishkek. EPA/IGOR KOVALENKO

Estimating the prevalence of disorders

Fortunately, digital health has arrived in the veterinary sphere and is set to provide, for the first time, comprehensive estimates of disorder prevalence.

Paul is the chair of VetCompass Australia, based on the highly successful UK VetCompass that he helped to establish ten years ago. It’s the first Australia-wide surveillance system that gathers together clinical records on companion animal diseases and treatments.

Bringing together all seven Australian veterinary schools, VetCompass Australia collects clinical records from hundreds of vets across the country for researchers to interrogate. Analysis of these records will reveal trends in the prevalence of inherited and acquired diseases, identify effective treatments, and help vets and breeders improve dogs’ quality of life.

Read more: Vets can do more to reduce the suffering of flat-faced dog breeds

The vision for this surveillance system is that it will one day provide real-time data on the prevalence of each known disorder and show how effective various control strategies are. Real-time data will also sound the alarm on clusters of new disorders as they emerge.

Complementing VetCompass is MyBreedData, a Finland-based website that collects the results of genetic analyses from huge numbers of dogs to identify mutations known to cause particular inherited disorders. Among other things, this information provides early warning signs of which breeds contain which harmful mutations.

What about hybrid vigour?

Hybrid vigour for a particular trait is the extent to which, on average, the puppies from the mating of a purebred female from one breed with a purebred male from another breed, are better for that trait than the average of the two parental breeds for that trait.

Evidence from other species suggests that hybrid vigour in dogs could occur to a limited extent in traits related to health, welfare, and fitness for purpose. The greater the genetic difference between two breeds, the greater the hybrid vigour is expected to be in first-generation offspring between those breeds. 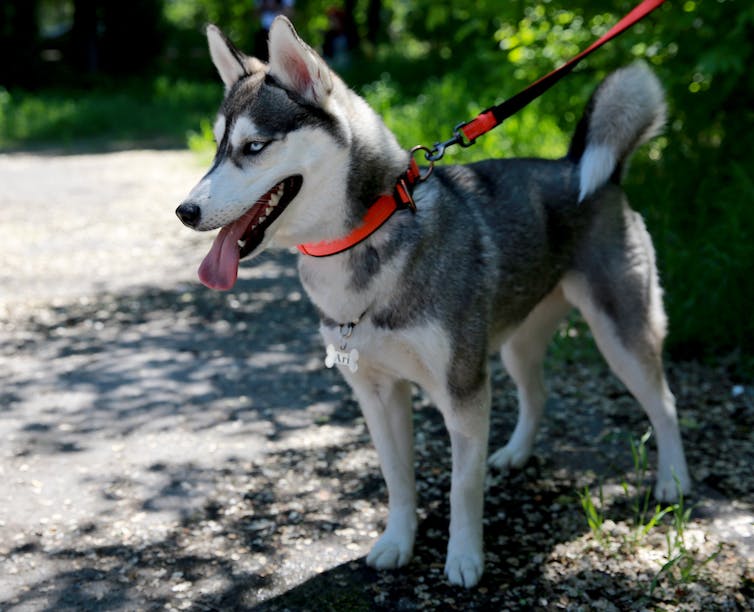 Husky dog waiting for his turn to be judged at a dog show in Bishkek, Kyrgyzstan, 05 May 2019. The International Kennel Club Dog Show was held in Bishkek. EPA/IGOR KOVALENKO

Importantly, breeding beyond first-generation crosses reduces hybrid vigour and unleashes unpredictable variation. This is good news for traditional stud breeders, because it means the most desirable hybrids are the offspring of two purebreds, rather than those bred subsequently.

Mixed-breed (or “designer”) dogs are not new: the Kennel Club has been registering them for more than 50 years. Unfortunately, most peer-reviewed studies of canine cross-breeds do not let us estimate actual hybrid vigour, simply because they fail to report the parentage of mixed-breed dogs.

Fortunately, obtaining evidence of actual hybrid vigour in dogs should be relatively straightforward: it simply requires veterinary records to include the parentage of mixed-breed dogs, when known.

Read more: Are you walking your dog enough?

The information being collected by VetCompass and MyBreedData will provide a firm foundation for prioritising research into, and schemes for controlling, inherited disorders within breeds. It also has potential to shed valuable light on the extent to which hybrid vigour exists in dogs. Armed with this information, breeders will be able to combine new technology with the skills of traditional dog breeding to breed dogs that are more likely to look great, be healthy and thrive in the niches we provide for them.