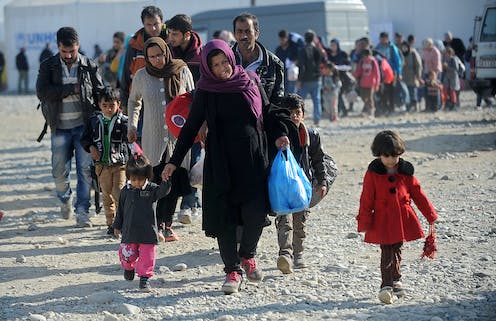 According to the United Nations, more people live in a country other than their place of birth today than ever before.

Although the number of migrants is expected to grow, a clear understanding of contemporary migration remains a challenge.

Defining who is a migrant

This challenge was on display at a recent meeting where a group of South Asian journalists, academics and activists gathered to address the core issue of migration.

Officially, the number of migrants globally reached 258 million in 2017, compared to about 173 million in 2000, which represents an increase of 49%. But it remains difficult to determine with reasonable clarity who is a migrant and who is not. The multiple identities of people on the move complicate migration statistics and generate controversy.

One of the speakers, Chris Lowenstein-Lom from the International Organisation of Migration (IOM), presented an overview of migration scenarios in South Asia to highlight the sheer number of migrants in the region, both internally and internationally. Many participants questioned the validity of the figures.

Journalists raised questions about the migration data gathered by the UN Department of Economic and Social Affairs (UN DESA) and IOM. The figures either contradicted their lived experience (for example, the number of Indian-origin people living in Pakistan, and vice versa) or overlooked the historical context of certain migrants (for example those of Bangladeshi-origin in India).

The IOM representative’s insistence on his organisation’s goal of “safe, regular and orderly” movement of people across borders resonated with other participants. They emphasised that improving data quality is important for achieving safe passage of migrants.

Concerns about accuracy and clarity of migration statistics were raised concerning both data collection methods and interpretation. For example, the ranking of countries by the number of migrants shifts dramatically with a change in definition.

Read more: Which countries have the most immigrants?

Any statistical generalisation about migrants requires significant qualification. Political perspectives on who is or is not a bona fide migrant vary significantly between countries. As a result, the figures produced to represent certain sections of the migrant population can become cloudy or even opaque.

For example, many Indian politicians label the Bangla-speaking Muslim population in northeast India as migrants from Bangladesh. But from the Bangladeshi perspective, most of these people can hardly be considered as such because they had lived in their current location since well before the state of Bangladesh was created in 1971.

Similarly, in the early stage of the 2017 influx of Rohingya people to Bangladesh, this definitional opacity created confusion about their status. Were they returnees, refugees or infiltrators? This lack of clarity in legal status has the potential to render a vast number of people stateless.

On the other hand, the refugee status of the Afghani people in Pakistan has been relatively clear to many sides, even though the identity of a specific individual can still be problematic.

Challenge to report on migration

These differences create a challenge for South Asian journalists to report accurately on migration issues.

Consider the following figures: According to the UN DESA 2017 estimate, 33.5 million people moved out of five South Asian countries (Bangladesh, India, Nepal, Pakistan and Sri Lanka) while 11.7 million people lived in these countries as migrants.

According to this estimate, about 60% of the 5.2 million migrants in India were from Bangladesh. But this estimate was based mainly on population data produced by India. Bangladeshi officials and experts had reservations about this figure because, they claimed, the historical dimension mentioned above had been overlooked in its calculation.

One can easily imagine the difficulties faced by journalists in busy newsrooms with limited resources. They need to report on complex migration issues and are expected to report them accurately, without a clear definition about who is and is not a migrant. Would you label Rohingya people in Bangladesh as “returnees”, following the Myanmar authorities? Or would you use the “infiltrator” description, as Bangladeshi officials initially identified them?

Some of this confusion may be clarified over time, but others continue to bug journalists and other commentators. The lack of a clear definition exists not only in South Asia.

Despite the well-founded criticisms levelled against the UN data on migration, they remain the most widely used set of figures globally. Other organisations and mechanisms of data distribution, such as IOM or the Migration Data Portal also use them.

An important characteristic of the data set is its origin. They are mainly produced through official population censuses by the respective member states, using public money. Everyone has a stake in improving the quality of these data for a better understanding of the complexity of South Asian and global migration.