The resounding victory of the Bharatiya Janata Party (BJP) coalition in India’s federal election represents a key marker in the modern history of India. It was the most extensive and probably most expensive election campaign in the country’s history, with 900 million voters casting their votes in one million polling stations over 38 days. Some 83 million Indians were first-time voters, with 15 million of them aged 18 and 19.

The great Indian festival of democracy - as the elections are often called - is seen as the most challenging exercise in making all Indians feel they have a say in the running of the government.

And the return of Narendra Modi as prime minister is both an opportunity and challenge for the country.

Read more: India election 2019: millions of Indian youth are underemployed and going to the polls

The 2019 parliamentary elections were the most “presidential” since the era of Prime Minister Indira Gandhi four decades ago, with a focus more on the personality of one leader (and his track record) than the candidates standing for office and their respective parties.

I travelled across India to the hustings in as many as 50 parliamentary constituencies and witnessed firsthand the “Modi phenomenon.” In constituency after constituency, BJP candidates evoked Modi’s name and displayed his image every opportunity they could. 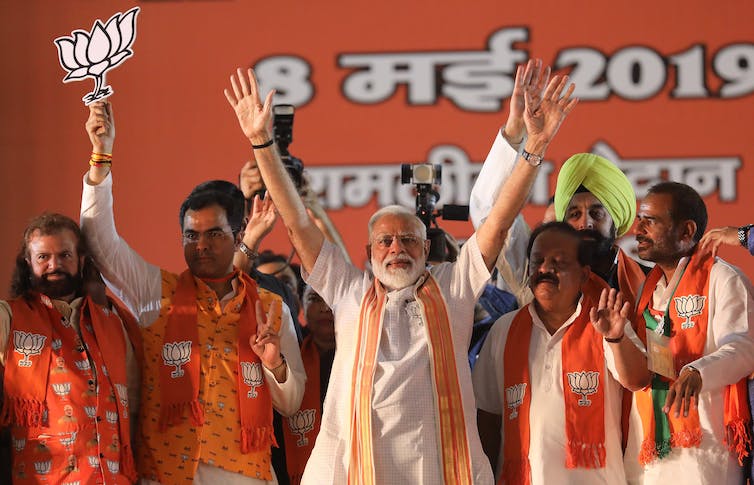 Modi is loved by many in India, but blamed by others for worsening divisions between Hindus and other ethnic and religious minorities. Harish Tyagi/EPA

Modi was projected as the only leader who would revive the great Indian civilization and save the country from the powerful elites and corrupt politicians who made up what the BJP deemed the “anti-national” opposition.

At times in the campaign, his personality assumed almost mythological proportions. The defining image was of the Indian leader shedding his regal robes and retreating to a bare cave in the Himalayas, close to one of the important centres of Hindu pilgrimage, where he meditated in a monastic saffron shawl. This reinforced his popular image as a puritanical and incorruptible leader whose first choice in life was to be a monk.

In contrast to this imagery, the opposition parties ran lazy, tired campaigns that failed to have much impact.

The Congress Party, the country’s once-dominant political party, did not improve much on its devastating results from the 2014 election. Priyanka Gandhi Vadra, the sister of Congress President Rahul Gandhi, tried hard to mobilise voters with rousing speeches and campaign events, but these were just brief moments in the longest campaign in Indian electoral history.

The Congress Party’s traditional hubris showed little signs of abating as it abandoned any chance of building potentially winning coalitions that could have countered the Modi juggernaut.

The only real resistance to the BJP-led coalition came from India’s largest state of Uttar Pradesh, where two strong regional parties suspended their traditional rivalry to establish an alliance.

The Modi campaign succeeded not just in appealing to nostalgia for India’s greatness or in the ultra-nationalism that peaked after airstrikes against what India viewed as terrorist camps in Pakistan in February. It was actual delivery on the ground.

The social welfare schemes built around providing lavatories, cooking gas and direct cash transfers to India’s poorest have had tremendous impact across the country. Surprisingly, even the more woolly-headed schemes of the Modi government, such as his chaotic demonetisation decision in 2016 and a poorly implemented introduction of GST, were perceived by many voters as policies that were well-intentioned, but badly executed by the toxic bureaucracy seeking to undermine Modi.

In part due to these social welfare schemes, the BJP expanded its presence in states where it has traditionally had little previous success, including Bengal, Odisha and many parts of southern India. 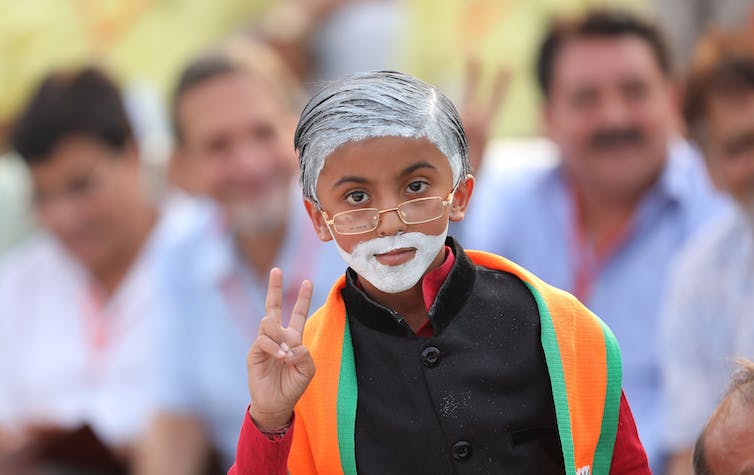 A young Modi supporter at a rally in New Delhi. Harish Tyagi/EPA

What Modi’s win means for India

So, what can Indians expect from a BJP-led government for the next five years? Based on what we have seen since 2014, the government will be centralised and driven primarily from Modi’s office. Fortunately, the messiness of Indian democracy and the strengths of the constitution will prevent the country from leaning towards authoritarianism, so that should not be a concern.

The previous Modi government has shown it was possible to take a pragmatic approach to social and economic policies.

There are many key challenges that will require a fine balancing act. These include a further liberalising of the economy, with the structural changes needed to make it easier to do business in India and attract more foreign investment. Creating jobs and skills training for the vast numbers of young Indians remains a formidable challenge, as does India’s struggling agrarian sector, which has reached a crisis point.

It remains to be seen if the activism of the BJP’s rank-and-file members, as well as the party’s supporters in the Hindu nationalist movement, can be managed without compromising on key policies that India needs for social cohesion and to continue growing the economy. It will also fall to Modi to reassure ethnic and religious minorities – many of whom have fallen victim to Hindu mob attacks – that they are part of an inclusive vision for the country.

In terms of foreign policy, Modi has demonstrated deftness in New Delhi’s relations with powers like China and the US, as well as other countries in the region. There are sure to be new challenges with Pakistan, in particular, as well as an increasingly belligerent China, but Modi has already shown he has a unique ability to build a personal rapport with other leaders.