[I] walk this route to the train station. I often get cat-called whilst walking to the train. It’s also very poorly lit at night. (Female, age 27)

In 2019, The Australia We Want report noted that at least half of Australian women do not feel safe walking alone at night. This is unsurprising given the prevalence of sexual harassment and gender violence women manage when moving through cities every day. Women’s avoidance of areas of the city creates a complex internal geography of exclusion zones and “take extreme care” zones – all in the hope that this vigilance will keep them out of harm’s way.

Protecting women from the violence committed by some men is a priority. So too is recognising that most cities are gender-blind and disregard women’s needs and experiences.

We need to understand the patterns that exclude women from areas of cities and not defer to the usual responses – brighter lighting, more CCTV cameras and more authority figures. In fact, our research into unsafe “hotspots” has found young women’s perceptions of urban safety do not correlate with the most brightly lit spaces.

We know that creating safer cities for women requires one fundamental shift: that we listen to women’s voices. We need to develop urban strategies and planning policies that draw on women’s experience and expertise as users of city spaces.

I pass through here twice a day to get to work and am routinely verbally abused by men. I feel unsafe and would never go through here at night. I wish the police or government would listen to women’s stories and do something about this place. (Female, age 25)

What does the research tell us?

Plan International, the Monash University XYX Lab and ARUP lighting researchers have pooled their expertise to drill down into the stories of young women and analyse the relationship between urban lighting and women’s perceptions of safety.

The research struck on some compelling correlations between light levels and unsafe places. Analysing over 80 of the most unsafe “hotspots” identified by women in Melbourne, the research found that high illuminance – or very bright and overlit spaces – does not correlate with young women’s perceptions of urban safety.

This is important information as planners often light spaces to a high “P” Category (a measure used in urban place-making guidelines) of lighting. It’s assumed this will reduce the risk of crime and increase the feeling of safety.

But our research shows that designing lighting that is positive for women’s urban experience requires more nuance. The findings show that sites with higher light levels are more likely to be perceived as unsafe sites – the average light level across these sites was twice what was measured across safe sites. This is a finding with the potential to radically change a city’s approach to lighting for safety.

Never felt safe walking in this area, even if I am not alone. The lighting is terrible and the design of the walkways leaves a lot of spots hidden from view. (Female, age 19)

This area feels so dodgy. The light level means you can’t see who is approaching you. (Female, age 39)

The analysis showed that consistent and layered lighting – where there are multiple light sources and where surfaces with different reflective values are taken into consideration – makes women feel most safe. This kind of lighting reduces the “floodlit effect”, the sharp drop-off of light beyond the path, and the potential for glare and contrast to blind and disorientate.

The emphasis on LED lights for their energy efficiency is unquestioned. But in urban lighting they are mostly a higher colour temperature such as 4000K “cool white” and above. This new research challenges the effects of this approach. 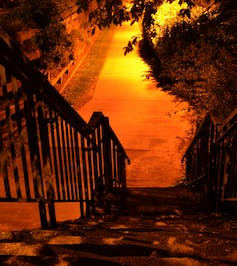 Instead of yellowish sodium lighting, women prefer a high-quality LED light that enables them to distinguish shapes and colours. Trixcis/Shutterstock

ARUP’s research shows the human visual spectrum reacts better to warm light, and the data from young women showed how sensitive they are to cool white light with regard to feeling safe in cities. Spaces with warmer colour temperatures are perceived as safer places.

Looking deeper into the quality of light in our cities, the majority of bad areas had a very large range of colour rendering. The lowest colour rendering came from sodium luminaires that make everything look overly yellow. Women preferred a high-quality LED light that enabled them to distinguish shapes and colour, helping to create a sense of safety.

Read more: Safe in the City? Girls tell it like it is

What does this mean for urban design?

More broadly, the research challenged the assumptions that urban lighting design relies on in general, and the effect it has on the character of our cities at night.

At present, illuminance (the measure of light falling on a surface, or Lux) is the only unit of measurement required to comply with the P Categories of the Australian Standards. Based on the results, it appears other metrics such as luminance (light bouncing off a surface and hitting the observer’s eye) should be considered too. This will ensure the context of material finishes and surface intensity is taken into account for how the eye perceives space.

Through research such as this, we have the knowledge, data and technology to engage women in trialling new ways of co-designing better outcomes for cities after dark. We can use considered urban design as a tool for positive change.