Privacy was not a hot topic in the recent Australian election, but it should have been. This is because the City of Darwin is adapting elements of the Chinese social credit system for use in Australia. The Chinese system’s monitoring of citizens’ behaviour has been widely condemned as “Orwellian”, with frequent comparisons to the dystopian near-future sci-fi of Black Mirror. But for Australians it’s pitched as progress towards a digitally integrated future, embedded innocuously in the “Switching on Darwin” plans for a smarter city. 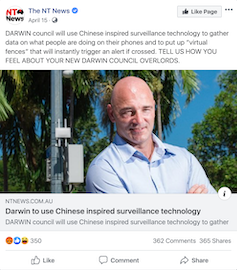 Facebook/NT News To see why this is a worrying development for Australian democracy one must first play a patient game of join the dots. Dot 1. One of Darwin’s six “sister cities” is Haikou, capital of the Chinese island province of Hainan. Links established through sister-city relationships are commonly understood to be a springboard to wider networks of co-operative arrangements. Such connections may provide opportunities for cultural exchange, but also for technological exchange. Recently there have been reports on how smart city plans in Darwin draw inspiration from the Chinese social credit surveillance system. 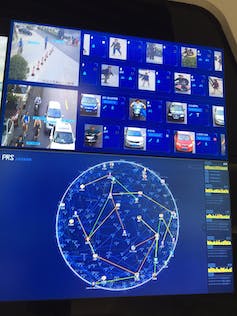 Chinese surveillance technology for tracking individuals on show in Hangzhou. Lisa Martin/AAP The potential of the system for gathering data on citizens’ use of public services, such as Wi-Fi, has been noted. The potential to enhance council profitability through sale of user data to the private sector is significant. More so is the potential for this system to track citizen movements in real time. Dot 2. The 2019 Northern Territory government budget earmarks A$1.4 million for expanding the local CCTV network as part of “Investing in a Safer Territory”. This figure might yet be supplemented by “proceeds of crime” funds, making the investment much larger. That’s enough money to roll out biometric facial recognition software, which can link your face from a live CCTV image to your driver licence or passport, as well as “triggerfish” apps that can access, for example, identifying data on your smartphone remotely without your knowledge. All of these systems can be automated. Read more: Big brother is watching: how new technologies are changing police surveillance Dot 3. The Encryption Act, rushed through federal parliament in December 2018, gave law enforcement and intelligence agencies unprecedented access to communications technology. Telecommunications providers must now provide potentially unlimited back doors into private data. They must also, by law, conceal that they have done so from customers/citizens. Read more: The government's encryption laws finally passed despite concerns over security Foundations of a surveillance state are in place Each dot offers a point of triangulation for very real fears about the form and nature of Australian democracy in years to come. Combine these points of technology and law and we see the foundation of a surveillance state. The ability of agencies to track citizen activity extends from which websites you browse on your mobile to what you write in your private messages to where you are right now. Given how grey these laws are, and the absence of a constitutionally protected right to privacy in Australia, this could extend to criminal records, medical files, payslips, spending patterns and browsing histories. The Northern Territory News reported: Darwin council will use Chinese-inspired surveillance technology to gather data on what people are doing on their phones and to put up ‘virtual fences’ that will instantly trigger an alert if crossed. That is correct. This technology can track a smart phone. It can also, potentially, identify the user. Darwin City’s general manager for innovation, growth and development services, Josh Sattler, told the NT News: We’ll be getting sent an alarm saying, ‘There’s a person in this area that you’ve put a virtual fence around.’ […] Boom, an alert goes out to whatever authority, whether it’s us or police, to say ‘look at camera 5’. That equates to real-time tracking of a private citizen by law enforcement and local council. And this in a free and democratic country. 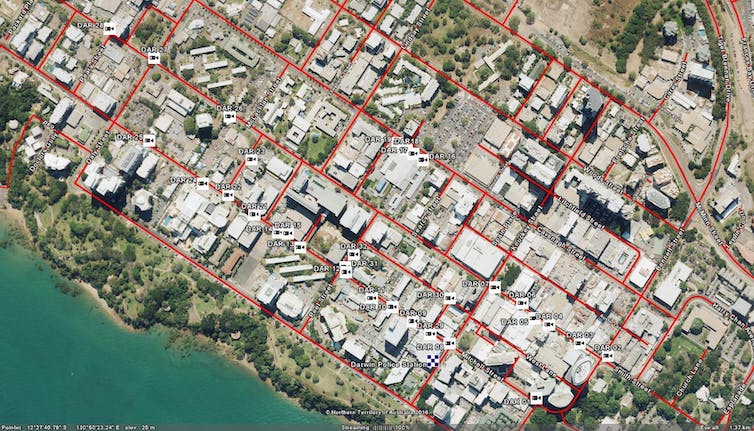 This NT Police image shows CCTV locations in central Darwin. Between camera and mobile phone surveillance, authorities are now capable of real-time tracking of a private citizen. NT Police Is it smart for the public to be so trusting? The Encryption Act takes on a different tint when looked at through this lens. Law enforcement and intelligence organisations have been empowered by law to invade your privacy and protected by law from you knowing that they have done so. Such data can be used to place restrictions on free movement, a hard limit placed on a universal human right. Such data may also be sold to third parties, either in exchange for deals with government or to boost city coffers. The potential for abuse and the lack of safeguards for Australian citizens are staggering. The public are told to place angelic trust in the honesty of government agencies, agencies that by and large regulate themselves. There is toothless public oversight by groups like the NSW Independent Commission Against Corruption, which are all too often hamstrung by a culture of silence. But, remember, if you’ve got nothing to hide you don’t need to be afraid! After all, it’s only a smart city Wi-Fi program for better street lights. Read more: Australians accept government surveillance, for now The City of Darwin and City of Palmerston have also bought five new high-definition mobile CCTV units with A$635,000 in funding from the Australian government’s Safer Communities Fund. Northern Territory Police will deploy these across both municipalities. The camera systems will be used to police “crime and anti-social behaviour” and to “protect organisations that may face security risks”. Remember the city of the future is a safer and more vibrant space. And, if you want to be in it, you will be watched both online and offline, wherever you go. All the time.