Slurries of mud increasingly threaten the water we drink. This rush of sediment, known as “debris flow”, is a type of erosion where mud and boulders in steep catchments suddenly tumble down the stream channel, often travelling at speeds of several metres per second.

And they don’t just damage water supplies – they can cut roads, damage infrastructure, and even kill people. Last year, California saw mudslides that destroyed more than 100 homes and killed 21 people.

In our research, published in the journal Geology, we found that debris flow is likely to become more frequent and widespread as bushfire activity and rainfall intensity are predicted to increase. Climate change is likely to provoke the extreme weather conditions that cause these bushfires and intense rainfall events.

In turn, these debris flows can contaminate the water supply, with the potential to affect large catchment dams.

In 2003, debris flows poured mud into Canberra’s Cotter Dam - an event caused by bushfires in the catchment of the reservoir. The fires made debris flows more likely because they reduced vegetation cover and soil infiltration (a process in which water can be absorbed by soil).

The resulting turbidity (cloudiness), iron and manganese in the reservoir closed Canberra’s main water supply for six months. A new A$38 million treatment plant had to be built, in case this happens again. 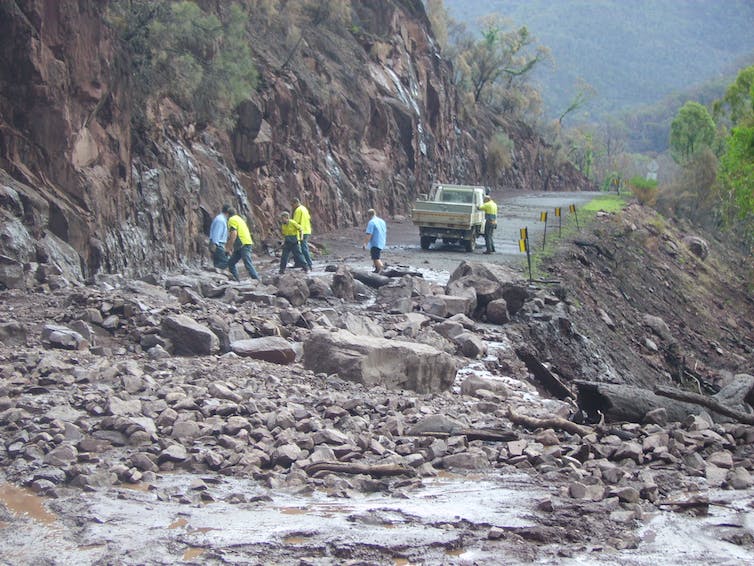 Debris flows such as this one were once rare, but over the last decade they have become more common in southeastern Australia. In fact, we mapped nearly 500 debris flows that occurred in Victoria between 2009 and 2012.

Concern about this threat has led Melbourne Water, East Gippsland Water and the Department of Environment Land Water and Planning in Victoria to partner with us on a project that aims to develop tools for predicting and mitigating impacts of debris flows on water quality.

We can expect debris flows to increase

Debris flow frequency is a water contamination risk. The threat is at a maximum when there are frequent shifts between wet and dry extremes.

Read more: This is what Australia's growing cities need to do to avoid running dry

And climate change, which is likely to cause more intense rainfall, more wet and dry extremes, stronger El Niños and more bushfires, will make both types of debris flow more common.

During wet conditions, often associated with La Niña, such flows are caused by landslides, which occur when soils are saturated and lose their cohesiveness. Landslides become debris flows when they travel through stream channels.

There were several hundred large debris flows in Wilsons Promontory and the Grampians National Parks, for example, during the extremely wet summer of 2011.

Read more: Cities turn to desalination for water security, but at what cost?

The debris flows in the Grampians caused water supply issues like those in Canberra. Lake Bellfield, for instance, which supplies water to 48 towns in the Wimmera region, could not be used for drinking water for more than three years.

During dry conditions, often associated with El Niño, debris flows are caused by post-fire surface runoff and a process called “sediment bulking”. This is when ash, gravel and debris are eroded from hillsides and stream channels by surface runoff during sudden thunderstorms with short and intense bursts of rainfall. These debris flows typically occur when soil is dry.

We identified more than 300 debris flows of this kind in areas burned by the 2009 Black Saturday bushfires. 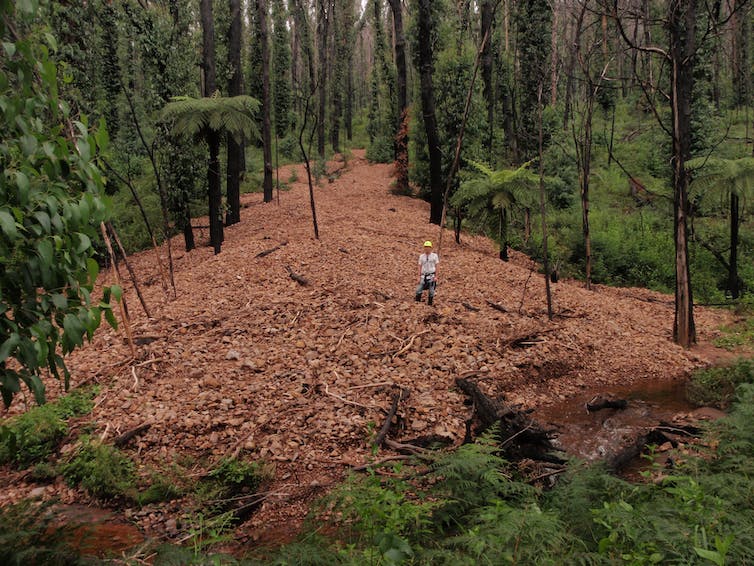 Following the February 2019 fires, there is greater likelihood of debris flow, which in turn could contaminate water coming from Melbourne’s Thomson catchment. What’s more, the Upper Yarra catchment, which is crucial to Melbourne’s water supply, was close to being burned by bushfires in both 2009 and 2019.

In our study, we modelled post-fire debris flows with the movement of clay particles in a reservoir. The model suggests water contamination in the Upper Yarra catchment could disrupt Melbourne’s water supply for up to 12 months.

Based on our model, the cost of sourcing alternative water supplies during such interruptions is in the order of A$100 million.

How can we manage this problem?

Apart from ensuring we have alternative water supplies, there are some things we can do to reduce the chance of debris flows.

The risk of post-fire debris flows would be greatly reduced if high-severity bushfires could be avoided in steep and erodible areas. Strategic fire breaks, targeted firefighting efforts and fuel reduction burning are, to some extent, measures that can make this happen. We have developed models to identify high-risk areas to be targetted.

Read more: Massive storms are pumping pollution into our oceans: time to clean up our cities

Engineering structures to control debris flows are another option. Japanese and European engineers have developed structures such as “debris flow barriers” that can trap sediment, but also dissipate energy of the flow.

It is not clear if these structures can trap the fine sediment that would contaminate our reservoirs, but methods are being trialled in the Thomson water catchment.

Mitigating the risk through fire management and debris-flow control will need a coordinated approach, particularly in settings with complex land arrangements, such as Melbourne’s water supply catchments.