How would the disappearance of anglerfish affect our environment? - Bella, age 6, Sydney.

As I am sure you know, anglerfish live deep in the ocean. The females have an enlarged fin overhanging their eyes and their mouth that acts as a lure – much like bait on a fishing line - and this explains their name. (“Angling” is a method of fishing.)

The fact is we understand very little about the deep sea and how its inhabitants, including anglerfish, will respond to change. In fact, more people have walked on the Moon than have been to the bottom of the ocean.

But I will do my best to answer your question.

Read more: Curious Kids: how do creatures living in the deep sea stay alive given the pressure?

Close your eyes and imagine a spider’s web. All parts of it are connected, and if a bug gets tangled in one part, it can cause a completely different part of the web to wobble or break.

It helps to remember that all species are interconnected via something called the “food web”. The food web is not a real web like a spider’s web. It’s just a way of thinking about how species are connected to each other. Basically, the food web tells us who eats whom.

If you make a change to one part of the food web, that can have an ripple effect that can cause changes on another part of the web. 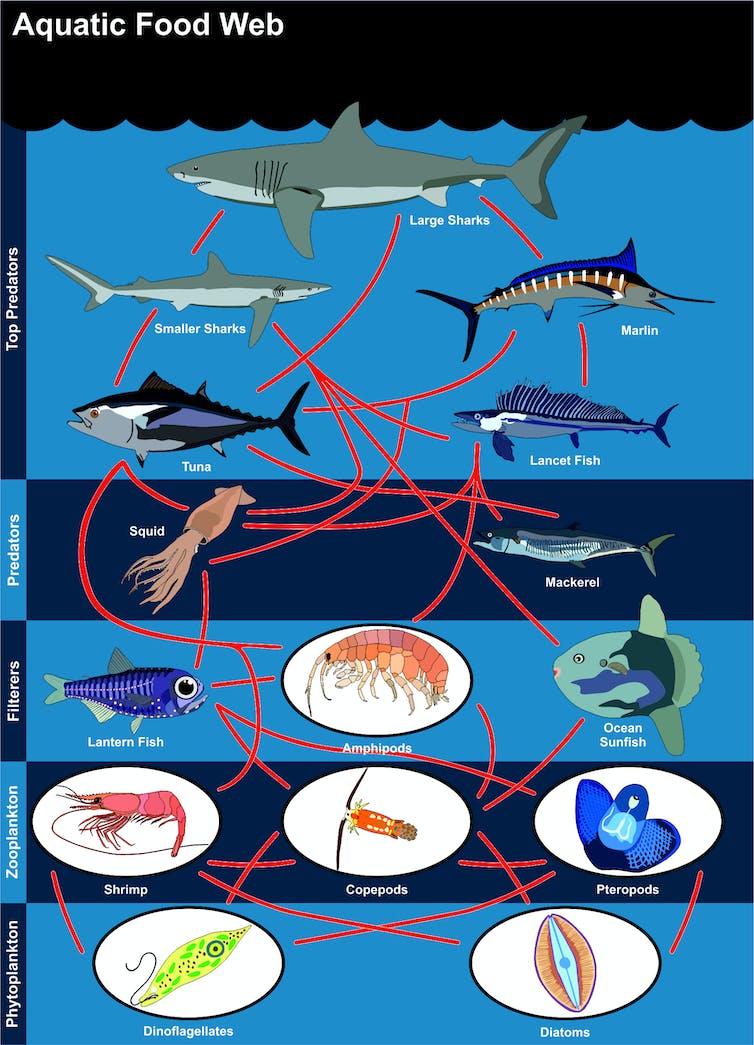 Here’s an example of a food web (not every animal is included in this one, but you get the idea). Shutterstock

Less of one animal can mean more of another

It is likely that if all the anglerfish in the ocean disappeared, their prey would explode in number and another predator would then “step in” to replace them.

And any species that likes to eat the anglerfish would have to start eating another species instead – or risk dying out.

At the height of the whaling industry, about 100 years ago, whales nearly disappeared. That meant that the number of krill (the tiny animals that whales eat) exploded, providing a feast for other animals that also eat krill – such as seals. That is how a food web works. 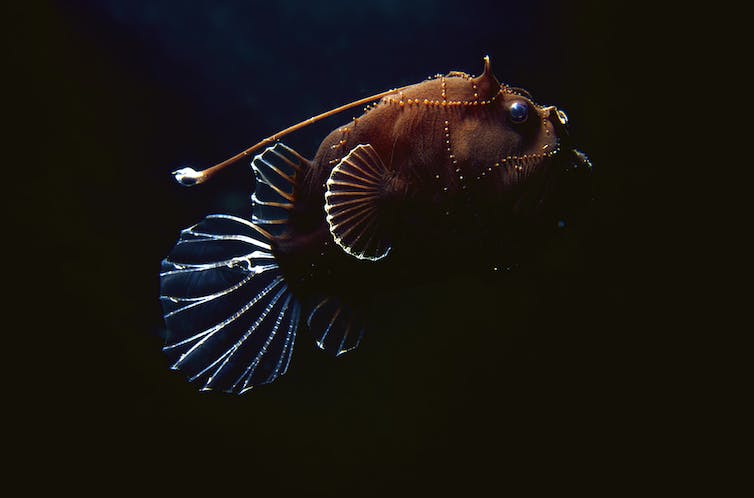 This anglerfish was found in very deep water off the coast of Queensland. AAP/Queensland Brain Institute

There are around 200 different types of anglerfish. Although one giant species grows to over a metre, most anglerfish are tiny – less than 10cm long.

Only female anglerfish have lures. These lures often glow in the dark, thanks to the bio-luminescent bacteria inside them, which presents a tempting (but fake) meal to their unsuspecting prey.

Anglerfish don’t form large schools like many other fish and this represents a problem for them – they need to find a mate. The tiny males have found a solution: if they do happen to find a female, they grasp onto her with their mouths and never let go.

These males tap into the females’ blood stream and never have to eat again. Scientists call this behaviour parasitic. Sometimes more than one male can be attached to a single female. Imagine someone’s father being 100 times smaller than their mother and being permanently attached to her.

Nature is truly weird and wonderful. 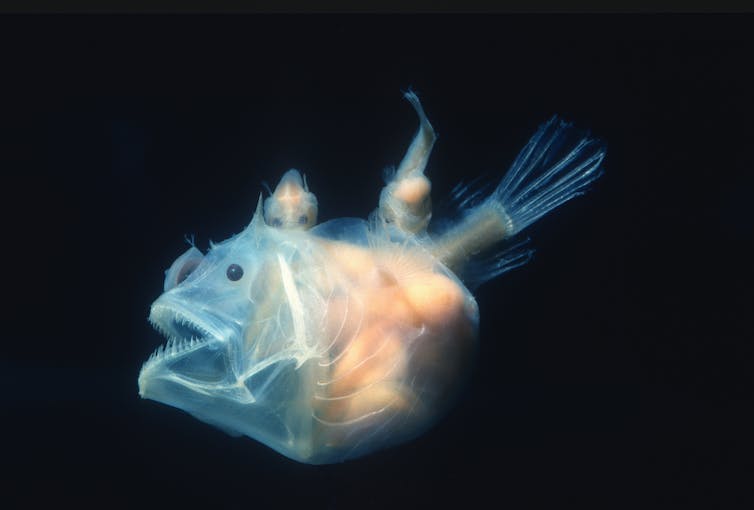 This picture shows the larger female has two smaller parasitic males attached to her body to fertilise her eggs. Shutterstock

Read more: Curious Kids: How was the ocean formed? Where did all the water come from?

Among the biggest problems for a lot of fish species are disease and overfishing by humans. But it’s highly unlikely that these threats could wipe out anglerfish.

Anglerfish are found between 300 and several thousand metres of water. At this depth, it is constantly dark and the water is cold.

As they live in such deep water and do not form schools, they are not targeted by fishermen, a common threat for many shallow water fish.

And anglerfish are so widely spread across the world’s oceans that any disease is highly unlikely to spread among them.

There is one threat that might affect angler fish – the threat of global warming. Temperatures in the deep ocean are very stable, they simply don’t change much.

Anglerfish live their entire lives at depth with near constant temperatures; hence even small shifts in temperature may affect them. It remains unclear whether increasing temperatures really will threaten angler fish – only time will tell. 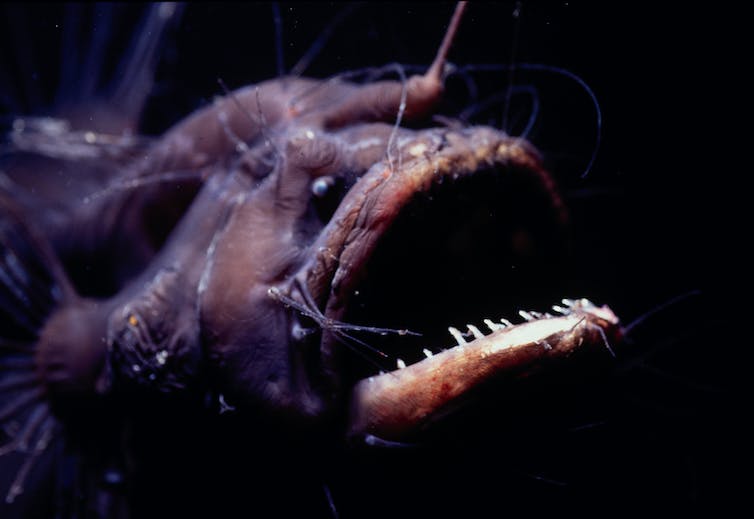