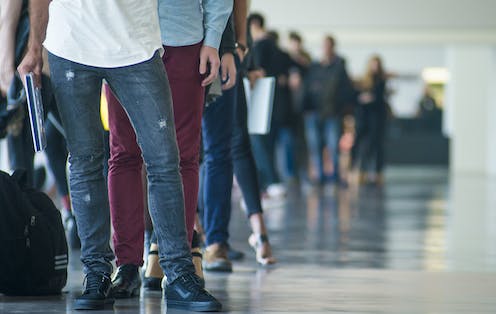 In its much awaited first well-being budget, New Zealand’s coalition government missed a major trick in not making unemployment one of their central well-being priorities.

As of March 2019, New Zealand’s unemployment rate was at 4.4% (not seasonally adjusted). The figure is slightly below the OECD average of 5.2%, and 12 OECD countries have lower rates.

Treasury forecast the rate to decline moderately to 4% this year and then to rise to 4.3% by 2023. While some might trumpet this as success, it is not good by New Zealand’s historical standards.

Between 1956 and 1981, our unemployment was never above 2% and often below 1%. In the mid-1980s, the then 4% rate was considered unacceptably high and offered as a rationale for the economic reforms of the time.

Low unemployment is central to well-being

Considerable amounts of research conclusively shows that when people become unemployed, their well-being, measured by their self-assessed life satisfaction, falls sharply. Should they remain without a job, the unemployed do not adapt to this new and traumatising experience. Their well-being remains low until they are re-employed.

The research suggests that the main impact of unemployment on well-being is not through people’s lower income. Rather it likely hits people through the loss of social status, loss of life structure and purpose, and lack of a positive social context.

Do nothing approach to unemployment

Treasury’s budget assessment of the unemployment rate at which the economy is stable (strictly speaking their estimate of the Non-Accelerating Inflation Rate of Unemployment, or the NAIRU) is 4.25%.

Following discussions with Treasury about the range of possible estimates around the 4.25% number, officials indicated they had no direct sense of its softness. But they did suggest that estimating the rate using different statistical models delivered quite different results. They didn’t state the size of these differences.

The Treasury criteria for choosing a specific statistical model behind the budget’s stable unemployment rate was not discussed in budget documents. A cynic might suggest that proximity of the estimated stable rate to the actual current rate of unemployment – which generates a do-nothing policy conclusion – might have been on decision-makers’ minds when selecting the “best” model.

The well-being budget did contain some new but minor unemployment initiatives. But they really amount to fiddling around the micro edges of a macro unemployment problem.

Even in today’s globalised trading economies, much lower unemployment rates than New Zealand’s current 4.4% are achievable. For example, the best OECD performer is currently the Czech Republic, with an unemployment rate of 2.1%. Japan is next at 2.4% and Iceland is at 2.7%.

The questioning of the very notion of a stable unemployment rate, and the suggestion that macro policies can have significant impacts on unemployment, is also attracting serious intellectual consideration internationally. Top US economist Lawrence Summers recently remarked:

[T]he issue that’s preoccupied monetary policy for the generation before the financial crisis – the avoidance of inflation – is no longer the top issue.

Rather, for Summers, that top issue was “getting to full employment”.

The government has missed an opportunity to use macroeconomic tools to test whether we can have a society which once again has low rates of unemployment, as we used to between 1938 and the early 1980s when they were between zero and 2%.

Read more: What is full employment? An economist explains the latest jobs data

From the 1938 Social Security Act on we have had a welfare system designed to work best when high numbers of New Zealanders are in work. Despite all the changes to the working age welfare system since the 1970s, it still functions best when the unemployment rate is considerably lower than what we have settled for today.

Full employment and low rates of unemployment were what economist Wolfgang Rosenberg described in the late 1970s as the fulcrum of our social welfare system. Perhaps much lower unemployment should once again be the fulcrum of what we might now call our social well-being system. To place it in such a position of prominence would be to inaugurate policies considerably more transformational than this coalition government has thus far delivered.