Who came up with the first letters? – Chase, age 6, Adelaide, SA.

This is a great question, Chase!

We don’t know exactly who invented the first letters. The Phoenician alphabet is considered the first known alphabet, but experts think it has its roots in an earlier Old Canaanite tradition.

You’re probably wondering: who are the Phoenicians? What does Old Canaanite mean? You’re right – these are unfamiliar terms to most people today. To explain, let’s look a little deeper into human history.

Writing is a pretty recent invention

Humans began to communicate using speech some 50,000 years ago but writing has only been a part of the human story for the last 5,000 years.

Writing wasn’t just invented once by a single person. Many different ancient societies invented writing at different times and places.

It seems writing was such a great idea, it just kept being created by humans living in all different parts of the world.

Writing was invented in different places

Thousands of years ago, people lived in Mesopotamia (near the modern day Middle East), Egypt, China, and Mesoamerica (near what we now call Central America). These different groups all invented their own kind of writing independently.

For example, the ancient Mayans in Mesoamerica had their own written language, which would have looked strange to the Sumerian people who lived in Mesopotamia. They had their own writing style, called cuneiform.

There is also the mysterious Rongorongo script from the people of Easter Island (also called Rapa Nui), which no one has been able to read – at least, not yet! 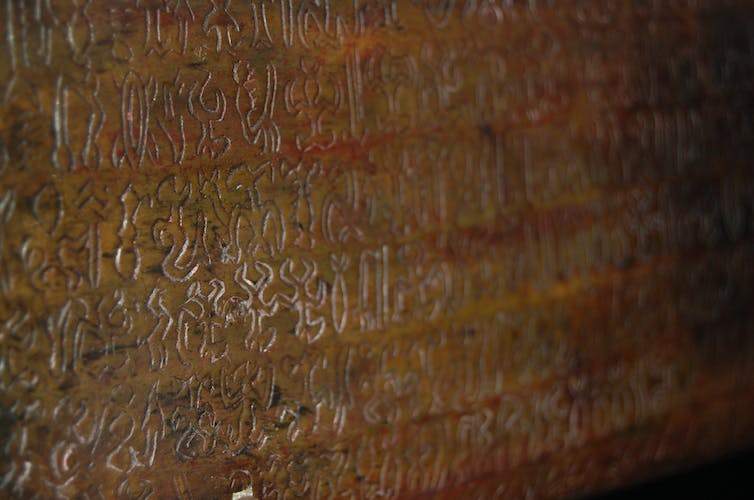 There was also plenty of copying and borrowing among ancient writers who came across other writing systems when they travelled.

This is true for the English letters we write with today. We call these letters the Roman alphabet because a long time ago, they were used by the people of ancient Rome (in Italy) to write Latin

In fact, these Roman letters are still used to write Latin, just like in spells in the Harry Potter books and films.

Read more: Curious Kids: Why does English have so many different spelling rules?

From cuneiform to alphabets

Many early styles of writing involved hundreds of symbols, pictures, and signs.

In one of the earliest types of writing, called cuneiform, a single sign could be used for a word, or a sound, or even give a hint about the type of word to follow. These scripts could be quite difficult to read. 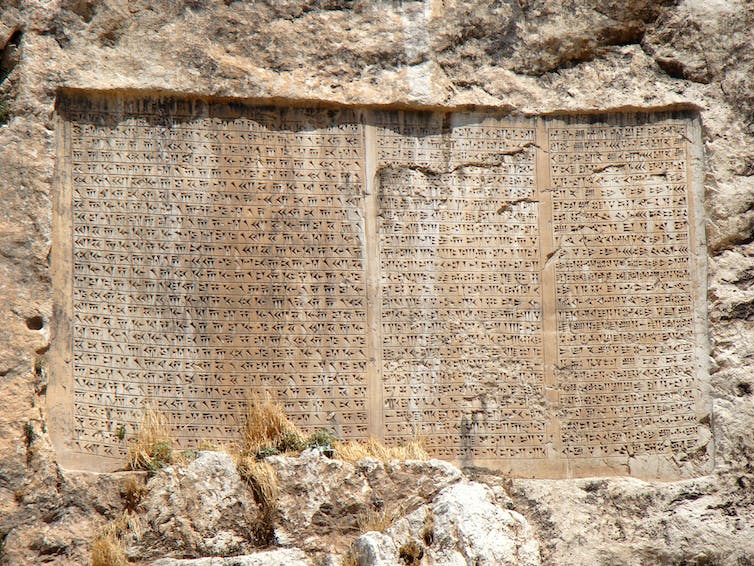 Here is a large cuneiform example found in Turkey. By Bjørn Christian Tørrissen - Own work by http://bjornfree.com/galleries.html, CC BY-SA 3.0, CC BY

Then came alphabets. An alphabet is a set of letters or symbols that can represent the sounds we make when we talk. The different parts of the alphabet can be put together to make different words, just like LEGO pieces that can be clicked together in different ways.

You know our alphabet, I’m sure, but other languages may have their own alphabet.

The Canaanites lived in an area of the ancient world called the Levant, in what we now call the Middle East.

The Old Canaanite script appeared around 3,500 years ago, and the Phoenician alphabet came after.

Unlike the art of writing more broadly, it is thought that all known alphabets (including our own) are in some way related to the Phoenician system.

Back to the Phoenicians 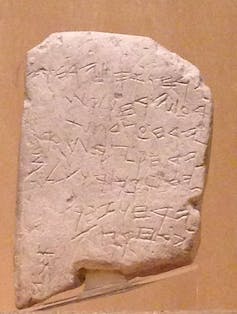 This ancient tablet is called the Gezer Calendar. it is written in either Phoenician or Ancient Hebrew, depending on who you ask. By oncenawhile - Istanbul Archaeology Museums, CC BY-SA 3.0

The Phoenicians lived in what we now call the Middle East. They invented an alphabet with 22 consonants and no vowels (A, E, I, O or U). Vowels only became part of the alphabet much later.

The Phoenicians were great traders, buying and selling things like wood, perfumes, honey and a type of purple dye worn by kings and queens.

The busy trading of the Phoenicians meant their inventions quickly spread to their trading partners. People soon realised writing was a good way to keep track of what they bought and sold.

So as you can see, writing has changed a lot over time. And it is still changing today! 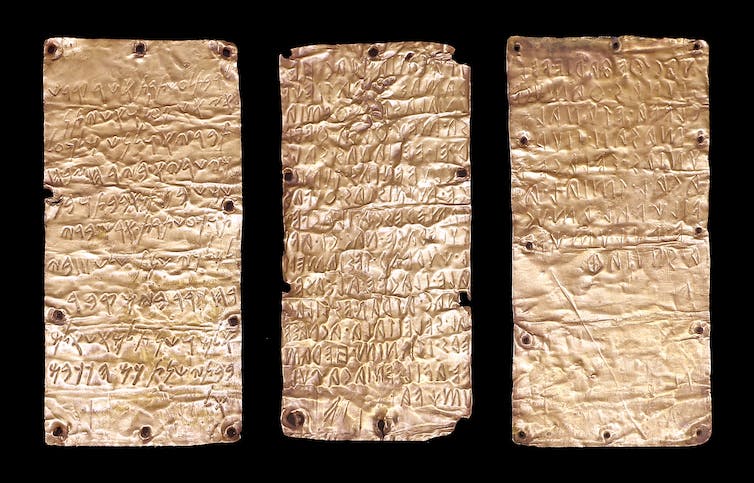 The Pyrgi gold tablets are inscribed with Phoenician and Etruscan. The Etruscan alphabet seems to be derived from the Greek alphabet. By Sailko - Own work, CC BY-SA 4.0, CC BY

Read more: Curious Kids: Who made the alphabet song?