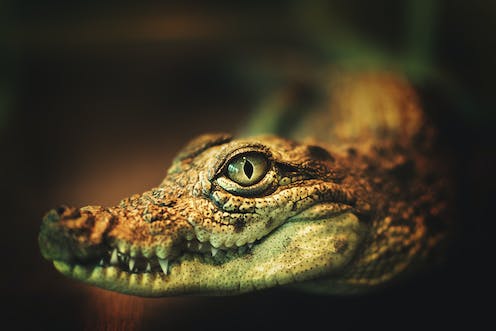 A young man recently turned up at a rural drug and alcohol service in New South Wales seeking help because of an infection in his arm. He said he had injected the drug Krokodil, which had not previously been reported in Australia.

Krokodil is a street name for desomorphine, a semi-synthetic drug that has similar effects to heroin and morphine. It’s called semi-synthetic because it is created in a chemical process but it’s made primarily from a drug, usually codeine, that comes from the opium poppy.

The short-term effects of Krokodil include relaxation, euphoria, slow and shallow breathing, and pain and swelling at the injection site.

People who use Krokodil are usually injecting opioid drugs such as heroin or prescription painkillers. These drugs cause physical and psychological dependence that drives people to seek out any similar product when withdrawal symptoms kick in.

Krokodil is usually injected but can be swallowed. It takes two to three minutes to have an effect that lasts about two hours.

A bit of history

Desomorphine was first made in 1932 in the United States by scientists testing the effects of different types of morphine on rats and mice. It was found to be strong, short-acting, and caused less nausea than morphine.

Desomorphine is eight to ten times stronger than morphine (1mg of desomorphine has the same effect as 10mg of morphine).

Trials of desomorphine on people started in 1934. People with cancer were given desomorphine to see whether it could control their pain. It did work but only for a short time – about two to three hours – and higher doses did not make it last any longer.

Tests for dependence on desomorphine found that tolerance increased rapidly, so more was needed for the same effect. It causes physical dependence after about ten days of regular use and leads to similar withdrawal symptoms to morphine and heroin.

Desomorphine was used in Russia and Switzerland to treat strong pain until 1981 under the brand name Permonid, but disappeared from use as other drugs delivered fewer side effects and more effective pain relief.

Desomorphine and is not currently used in medical practice.

The first reported use of desomorphine as Krokodil was in Russia in 2003. Krokodil was thought to be popular among people who injected drugs in Russia because codeine was available without a prescription and heroin was scarce.

Krokodil can be made at home from drugs containing codeine or other opioids mixed with things like paint thinner, petrol, the red tips from matches, and hydrochloric acid. The mixture is heated in a process often called “homebake”.

Read more: Weekly Dose: cocaine, the glamour drug of the ’70s, is making a comeback

The chemical reactions caused by cooking makes a stronger product than the codeine it started with. A yellowish to light brown liquid is produced with a strong acid-like smell.

The name Krokodil is thought to come from a step in the cooking process where codeine turns into a chemical called a-Chlorocodide, and also because it often causes ulcers and scaly skin that look like crocodile skin where it has been injected.

The reports focused on the skin infections and examples of gangrene said to be related to the drug. They referred to Krokodil as a flesh-eating drug and suggested users became zombies.

Poor injecting practices and poisons cause skin and vein problems, including infections, in people injecting any type of drug. But injuries from Krokodil can be more serious.

These effects are caused by the toxic chemicals used during the homemade drug process. The symptoms are exacerbated when people using Krokodil don’t seek treatment soon enough, or don’t return for follow-up care, probably because of their heavy involvement in drug use. The infections can be treated if caught soon enough and monitored.

Medical case reports have identified infections and rotting skin down to the bone at injection sites. This can include jaw osteonecrosis (jawbone exposure in the mouth) where ulcers and skin infections have affected a person’s gums.

Many people who have injected Krokodil into their mouths require surgery to cut away the tissue and sometimes infected parts of the jawbone. Some people have died within three years of starting to use the drug because of infections.

Is Krokodil coming to Australia?

In 2016, police and health representatives said there were no reports of Krokodil in Australia even though the media had warned of the possibility. Drug monitoring programs have not reported Krokodil use.

The appearance of Krokodil in rural NSW has probably got more to do with an entrepreneurial drug dealer making up for a shortage of opioids than widespread manufacture and use of the drug.