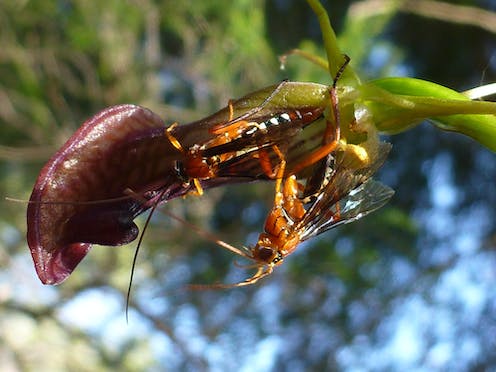 All living things are divided into six kingdoms: plants, animals, fungi, protists (protozoa and some algae), and two types of bacteria - eubacteria and archaebacteria.

The idea of being able to send instructions to organisms in different kingdoms is fascinating. Imagine telling mould to stop growing on your bread, or instructing your lawn not to grow higher than 10 cm.

Communication within a kingdom is hard enough – can you stop your cat vomiting on the floor? The more distantly organisms are related to one another, the more different the signals they use to communicate.

Despite this difficulty, some creatures do manage to send instructions across the kingdom barrier, all thanks to some clever chemistry.

One fine day in the 1920s, the now-famed Australian naturalist Edith Coleman brought some Cryptostylis orchids home from the bush, and made a fascinating discovery. Something strange was going on in her garden.

She was shocked to discover the orchids were attracting a plethora of bright orange male wasps which appeared to be trying to mate with the orchids. During their futile efforts, the insects inadvertently pollinated the flowers. This is useful for the orchid, but not for the wasps, who are wasting valuable time, effort, and sperm that were destined for partners of their own species.

Coleman had a hunch that chemistry was involved, so she set up an experiment to prove her hypothesis: covering flowers in muslin cloth to remove visual signals and leaving just floral scent to lead the wasps to the flowers. She was right – wasps were still attracted to flowers covered in cloth.

Almost 100 years later, my colleagues and I have proved Coleman right and discovered the specific chemical compound the orchids use to trick wasps into approaching them.

Working this out meant isolating one of the hundreds of chemical compounds in an orchid. To do this, we let the wasps choose.

We extracted all the compounds from flowers using a solvent, and then divided that into lots of smaller extracts. Each extract was then presented to the wasps to see whether they turned their nose up at it or not. It was very exciting when wasps picked a particular extract by flying up to it!

We then took these “wasp-selected” extracts and divided them into even smaller parts until we only had one tiny extract left, containing a single compound.

Animals have spread around the world thanks to their mobility, be it walking, flying, or swimming. Dispersal is more of a problem for fungi – have you ever seen a self-propelled mushroom?

Most fungi rely on the wind to blow their spores to new destinations. A portion of the millions of spores will land somewhere suitable, such as a moist forest floor.

But what if you were a fungus that wanted to go somewhere more specific - say, the inside of a tree? Well, some resourceful European fungi have got this one figured out.

These fungi live inside pine trees, feeding on the wood, which eventually kills the tree. When this happens, the fungi need to move house, so they use some clever chemistry to call a beetle taxi to take them to their new home.

The fungi produce a mixture of chemical compounds that attract tree-boring beetles. The beetles prefer to chew on trees containing the scent-producing fungi, and when they eventually move on to new trees they take the fungi with them.

So what is in this magic chemical mixture that attracts beetles? It turns out one of the components of the mix is actually a compound that beetles use to communicate with each other.

So what can we do with this curious chemical knowledge?

The combination of beetles and fungi feeding on the pine trees can be very destructive, and causes major economic losses to pine plantations. Knowing the chemicals involved in attracting the beetles to trees is a major step forward in protecting the trees, as humans can then use these chemicals to trick beetles by attracting them to scented traps instead of trees.

For our orchid example, having a compound that attracts pollinators can help conserve rare orchids, such as Cryptostylis hunteriana. Rare orchids sometimes need to be translocated - a process in which new orchid populations are started by introducing individuals into suitable habitat.

For an orchid habitat to be suitable, it’s very important that it contains the species that pollinate the plant. Pollinator-attracting compounds can be used to survey potential translocation sites to work out if pollinators are present.

Other research moves underwater for an application. Scientists have decoded the mating pheromones of reef-destroying crown of thorn starfish, and hope to use this to lure the starfish en masse into traps.

Aside from these direct uses, understanding these unique ecological interactions gives us insights into evolutionary processes and the complexity of the fascinating natural world in which we live.