Australian Ashley Barty is the toast of the tennis world right now.

Since winning her first Grand Slam singles title at the French Open earlier this month, the young star from Ipswich, Queensland, claimed another career milestone this week when she rose to the number one spot of the Women’s Tennis Association’s (WTA) rankings, officially making her the best female tennis player in the world.

With this latest feat, Barty becomes only the 27th woman in tennis history and only the second Australian woman, after Evonne Goolagong Cawley 43 years ago, to reach the WTA number one.

Standing just 166cms – slight by the standards of today’s tennis – and often wearing a disarming smile, few might have thought Barty had what it took to reach the highest level of the sport. But those who have played her or followed her game closely could tell you that Barty is special. This was evident in a recent New York Times survey of 20 tennis players, coaches and analysts, where the admiration and respect for Barty’s technique was on full display.

Of all players in today’s game, the experts ranked Barty’s backhand slice and net game as the best in the sport; the effectiveness of her second serve, they concluded, is rivalled only by Serena Williams’; and when it comes to overall touch and feel, few surpass her. 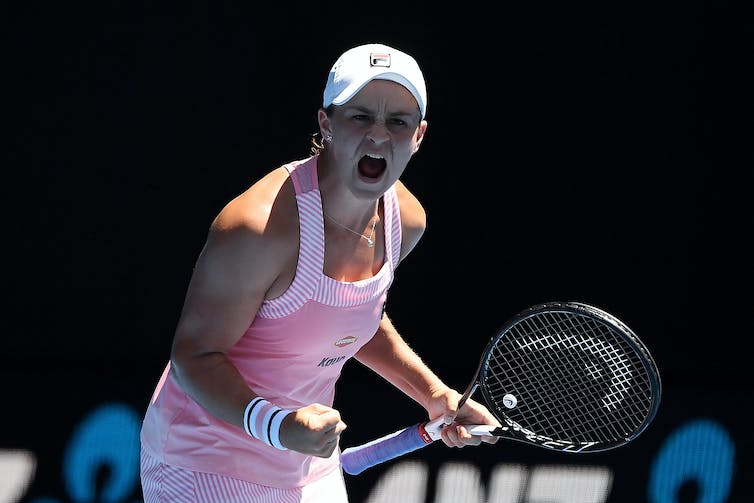 Barty’s extraordinary technique has seen her rise quickly up the rankings. AAP/Julian Smith

Hard numbers crunched by the Game Insight Group (GIG), an analytics team at Tennis Australia, back up the opinion of the experts. Using some of the richest data in the sport, including tracking data that captures the continuous movement of the ball and player throughout matches, GIG developed a set of performance stats known as Player DNA to understand player technique and approach. Barty’s DNA reveals a player who combines a remarkable mix of strengths: all-around flawless technique, excellent agility, and great physical and mental fortitude.

According to GIG’s stats, among women competing in Grand Slams in recent years, Barty’s technical ratings – out of a best possible score of 100 – are 89.0 for her serve, 86.3 for her forehand, and 90.9 for her backhand. Those scores put her squarely within the top ten of active players on overall technical ability, confirming that, while Barty’s backhand is her strongest weapon, she has multiple weapons to choose from in any game situation.

The DNA numbers also highlight tactical strengths that make Barty’s game unique. Commanding the space and time of a point is critical to success in today’s game. Barty scores an 88.5 on one of the key metrics in this area, namely, “court control”, which measures how successful a player is when they have a more advantageous court position.

Few other women’s players score higher on this measure, indicating Barty’s unique ability to capitalise on strategic opportunities in rallies.

Barty’s technical and tactical abilities are supported by outstanding agility that allows her to move with ease and strength throughout the court. Indeed, GIG’s “agility” statistic scores Barty at 93.9, making it her strongest physical attribute. It is the quality of movement that has made Barty one of the rare players in modern tennis who is at the top of the singles and doubles game – she holds major titles in both events.

Nearly equal to her agility is Barty’s endurance, where she rates 91.1 according to GIG statistics. In 2019 alone, Barty has played 11 three-set matches, two of them as part of her run at the French Open. Her win-loss record in those is 9-2.

Consistently delivering wins in the most physically demanding of situations requires great stamina but also great mental strength. The need for both of these qualities has become increasingly critical in the sport of tennis as the intensity and grind of the tour has only grown over time. All the more reason why a player like Barty has been able to thrive in today’s game.

It’s fitting that the year Barty first becomes the world number one is the same year of the release of David Epstein’s Range, a book about the value of generalisation in the pursuit of excellence (as opposed to the hyper-specialisation that has been popular for so long).

Some in the tennis world might have looked at Barty’s decision to take a hiatus from tennis to play in cricket’s Big Bash League at 18, when most professional tennis careers are just getting started, as a choice that would be the downfall of her tennis career.

But, with the benefit of hindsight, her break from tennis appears to have had the opposite impact. And, as Epstein argues, for good reason. Much like Roger Federer, who played multiple sports into his teenage years, Barty’s time playing cricket was an essential part to building the versatility, maturity, and creativity in tennis that set her apart from most of her peers. She has gotten to where she is today because of not in spite of her decision to pursue other interests early in her career.

Even with her growing fame and dominance in the sport, Barty continues to be one of the most humble and likeable players on and off court. Australian tennis fans no better than any one the disappointments that can sometimes come when money, social media, and youth collide in elite sport.

That Barty has maintained her integrity and stayed true to who she is throughout her rise is remarkable. No matter what more success Barty enjoys, she is certain to be a player who people will look back on and say: her character was as magnificent as her game.