Bob pushed me onto the floor and dragged me into the closet. While I was in the closet he put his hand over my mouth again and pushed on my neck. I started to feel dizzy and was kicking my legs and hitting his arm to try to let him know I thought I would die. – Doya, domestic violence strangulation survivor

Among women who have been abused, Doya’s experience is sadly not unique. In my research interviewing women who have experienced domestic violence, 24 out of 65 women (37%) reported having been choked, suffocated or strangled by an abusive partner or former partner.

This type of non-fatal strangulation can have serious health effects including memory loss, paralysis, pregnancy miscarriage, and changes to vision, vocal chords, hearing and breathing.

It’s also a red flag for future harm. US data shows victims who have been strangled by their violent partner are seven times more likely to later be killed or seriously harmed than a woman who has been physically assaulted or threatened by a current or former intimate partner but not previously strangled.

Read more: Victorian government should be wary of introducing a stand-alone offence of non-fatal strangulation

Yet non-lethal strangulation remains unrecognised as a specific criminal offence in some states. In the absence of a specific law, strangulation is typically charged as common assault, which carries much lower sentences.

This week Victoria has joined Queensland, New South Wales, South Australia and the ACT and committed to introducing a non-fatal strangulation offence.

The Queensland experience suggests introducing this type of offence will make a big difference to Victorian women experiencing or at risk of domestic violence.

Queensland introduced an offence for non-fatal strangulation in May 2016. A person commits this offence if they unlawfully choke, suffocate or strangle another person without the other person’s consent. The Queensland offence is specifically limited to domestic violence.

When the offence was introduced, the explanatory notes identified both the inherent danger of non-fatal strangulation and its association with escalation of violence and future homicide.

Analysis undertaken by the Queensland Sentencing Advisory Council shows there has been a strong take-up of the offence across the criminal justice process in Queensland. From June 2016 to June 2018 there were more than 400 cases sentenced for the non-fatal strangulation offence.

In almost half of those cases (49%), the non-fatal strangulation was also a breach of a domestic violence protection order. Nearly all offenders were male (98%) and most received a prison sentence (76%).

Read more: See What You Made Me Do: why it's time to focus on the perpetrator when tackling domestic violence

In one case, the sentencing judge acknowledged that the victim “could have been dead within seconds” and that the act is “inherently dangerous” and “could easily have caused permanent serious injury or death”.

Why it needs to be a separate offence

The introduction of the offence in Queensland has underpinned training for first responders, including police, ambulance officers and hospital admissions staff. They now learn about the dangers and risks of non-fatal strangulation, how to ask about it and how to respond.

Information is now included in policy manuals and risk-assessment tools. This helps first responders appropriately use powers such as arrest and detention, make appropriate referrals, and help with safety planning.

While other offences throughout Australian criminal law can be charged when there is a non-fatal strangulation, they may be difficult to prove. Evidence of intention to kill or cause serious harm is needed for attempted murder, and this is often hard to find. 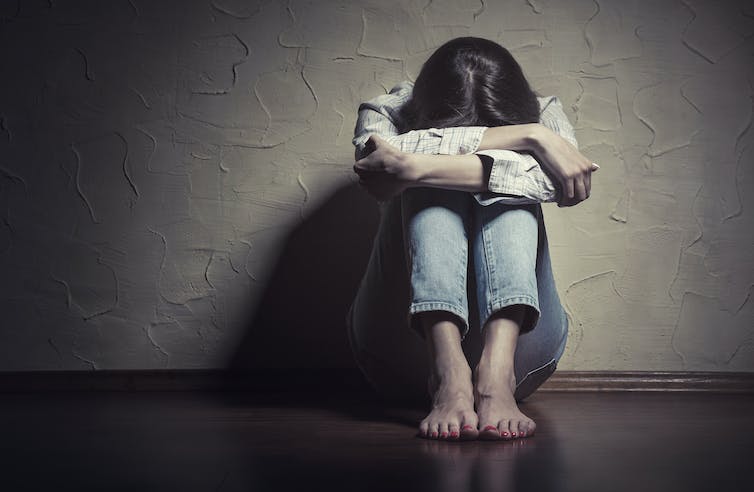 Many women who have been victim to domestic violence have experienced non-fatal strangulation. From shutterstock.com

Despite positive aspects associated with the non-fatal strangulation offence in Queensland, there are some concerns. Imprisonment is often not the best way to rehabilitate an offender. More resources are needed to support programs that work intensively with perpetrators to support behaviour change.

The abuser’s imprisonment can buy women time to escape to safety and re-establish housing, finances and schools for the children, but may not deter future domestic violence offending or keep the victim safe in the longer term.

Further, any use of criminalisation as a strategy to respond to domestic violence is likely to contribute to higher rates of imprisonment for Aboriginal and Torres Strait Islander people.

Read more: Infographic: A snapshot of domestic violence in Australia

The high use of imprisonment as a response to non-fatal strangulation may point to a lack of sentencing options, both for Aboriginal an Torres Strait Islander people and non-Indigenous Australians.

There may also be concerns about the scope of the Queensland offence. The offence must involve choking, suffocation and strangulation but these actions are not defined and may not encompass incidents that involve the offender “pushing on the neck”, which has the same risks and effects.

These matters would be worth considering as Victoria begins to draft its new offence.

Authors: Heather Douglas, Professor of Law, The University of Queensland