Iran’s announcement last Sunday that it would break the limit on uranium enrichment agreed to in the nuclear deal with world powers was not a surprise. It came hot on the heels of another breach only a few days earlier on the 300-kilogram limit agreed to in the deal on stockpiles of low-enriched uranium.

Iran had warned Europe that it would start dismantling the nuclear accord if the promised economic benefits of the agreement did not materialise. A year after the US withdrew from the nuclear deal, otherwise known as the Joint Comprehensive Plan of Action, or JCPOA, and imposed very strict sanctions on Iran, the Iranian leadership appears ready to give up on finding a diplomatic solution to this deadlock.

This bodes ill for the future of President Hassan Rouhani and regional security. A weakened Rouhani will find it difficult to fend off his hard-line critics in Iran and keep the nuclear deal alive.

With every step away from diplomacy, the hard-liners have taken a step forward and appear to be now setting the political agenda in Iran.

The JCPOA was signed in 2015 between Iran and the five permanent members of the UN Security Council, plus Germany.

This was Rouhani’s greatest achievement and riskiest gamble. He faced the ire of hard-liners in Iran who continue to have a formidable presence in the parliament, as well as the security and judicial system.

They accused Rouhani of selling out Iranian sovereignty and betraying the ideals of the Islamic revolution by scaling back Iran’s nuclear program and subjecting it to an unprecedented international monitoring regime.

Rouhani nonetheless pushed through his agenda of finding a diplomatic solution to Iran’s isolation because he believed that years of sanctions and mismanagement had pushed the Iranian economy to the brink of collapse.

He staked his political fortunes on bringing Iran out of isolation.

The JCPOA was the compromise deal to assure the international community that Iran would not pursue a nuclear weapons program in return for sanctions relief to revive the Iranian economy.

But US President Donald Trump never liked the deal. He campaigned against it and often questioned Iran’s commitment to it, though the UN International Atomic Energy Agency consistently reported on Iran’s compliance with the terms of the agreement.

Read more: Why Donald Trump is backing the US into a corner on Iran

Despite much lobbying by European powers, Trump withdrew from the deal in May 2018 and reimposed severe unilateral sanctions on Iran, and anyone dealing with Iran.

Losing control to the hard-liners

Trump’s decision to tear up the nuclear deal was seen by the conservatives in Iran as a vindication of their feelings towards the United States. They lambasted Rouhani for putting his trust in the US.

In May 2019, the situation got even more tense after Trump announced that US warships were sailing to the Persian Gulf to counter potential Iranian hostility. No intelligence regarding a suspected Iranian threat was shared.

The escalation of tensions following the alleged Iranian attack on two oil tankers last month, and the downing of a US reconnaissance drone by the Islamic Revolutionary Guards has made it very hard to find a diplomatic solution. Drums of war are silencing voices of diplomacy.

While Rouhani came to office with an olive branch, he realises that he has effectively lost the political contest against his hard-line critics. He has another two years in office, but is at risk of losing the presidency if the Supreme Leader Ayatollah Ali Khamenei, who yields ultimate power in Iran, is disillusioned with his performance.

This realisation has seriously undermined Rouhani, who appears to have adopted the language and posture of the hard-liners in relation to the US. It is unclear if this can save him in office, or embolden his critics who seem to be gaining significant momentum.

In May, the Supreme Leader appointed a battle-hardened General as the commander of the Basij paramilitary force, an arm of the Revolutionary Guards that suppresses domestic dissent.

Read more: Iran nuclear deal is hanging by a thread – so will Islamic Republic now develop a bomb?

This was a significant development for the hard-liners in case they seek to assert political control. Basij has been a ruthless security force inside Iran and can provide the necessary street support for a potential coup against Rouhani.

Another notable military commander is General Qasem Soleimani, who has enjoyed a meteoric rise in Iran due to his performance as commander of Quds Force, the Revolutionary Guards’ international arm operating mostly in Iraq and Syria to defeat the Islamic State.

He is considered a war hero by the public and now has the confidence of the Supreme Leader. This is an ominous development for Rouhani. 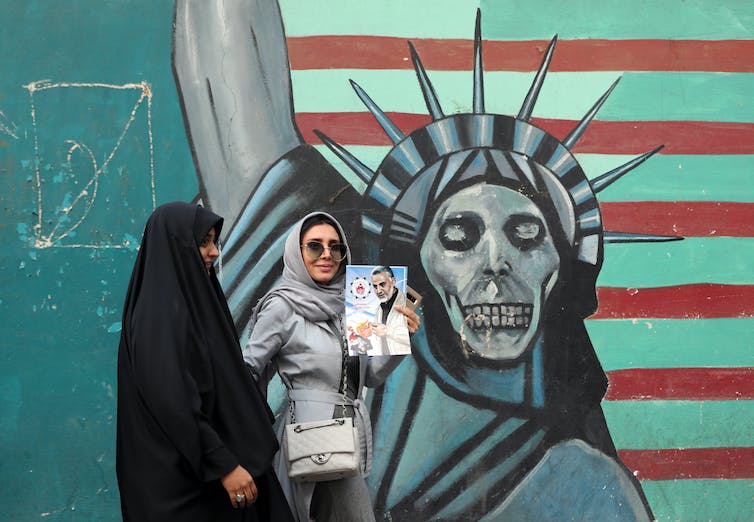 A woman carrying a picture of Qasem Soleimani during an anti-US demonstration in Tehran earlier this year. Abedin Taherkenareh/EPA

Breaking with the tenets of the nuclear deal was also clearly not Rouhani’s objective, as it would reverse his hard-won diplomatic gains and discredit his legacy.

Iran’s recent breaches on uranium enrichment and stockpiles were incremental steps to exert pressure on European leaders to adhere to their promises of sanctions relief. This strategy was predicated on the assumption that Europe has more to lose with the collapse of JCPOA than a rift with the United States. It can only be described as a desperate move, showing that Rouhani is fast running out of options.

The window of opportunity for a diplomatic solution is fast closing and the alternative scenario of the return of a combative government in Tehran is looking more and more unavoidable. This would shut the doors to diplomacy and increase the chance of confrontation with the West.

Trump accused Iran of not wanting to sit at the table. He may be fulfilling his own prophecy.

An earlier version of this article implied General Qasem Soleimani was the leader of the Basij security force, when he is actually the commander of the Quds Force.