For nine hours, my colleague Michael Shackleton and I held onto our scooters for dear life while being slapped in the face by spiked jungle plants in the mountains of Cambodia. We only disembarked either to help push a scooter up a slippery jungle path or to stop it from sliding down one.

With our gear loaded up on nine scooters – 200 metres of fishing nets, two inflatable kayaks, food for five days, hammocks, preservation gear for collection of DNA, and other assorted scientific instruments – we at last arrived at one of the few remaining sites known to harbour the critically endangered Siamese crocodiles.

Read more: If a croc bite doesn't get you, infection will

The Siamese crocodile once lived in Southeast Asian freshwater rivers from Indonesia to Myanmar. But now, fewer than 1000 breeding individuals remain.

In fact, during the 1990s the species was thought to be completely extinct in the wild. Then, in 2000, scientists from Fauna and Flora International found a tiny population in the remote Cardamom Mountains region of Cambodia.

We travelled to this remote wilderness in 2017 to determine habitat suitability for the reintroduction of captive-bred juvenile Siamese crocodiles. We wanted to understand the food web there to see whether it contains enough fish to sustain the young crocs. 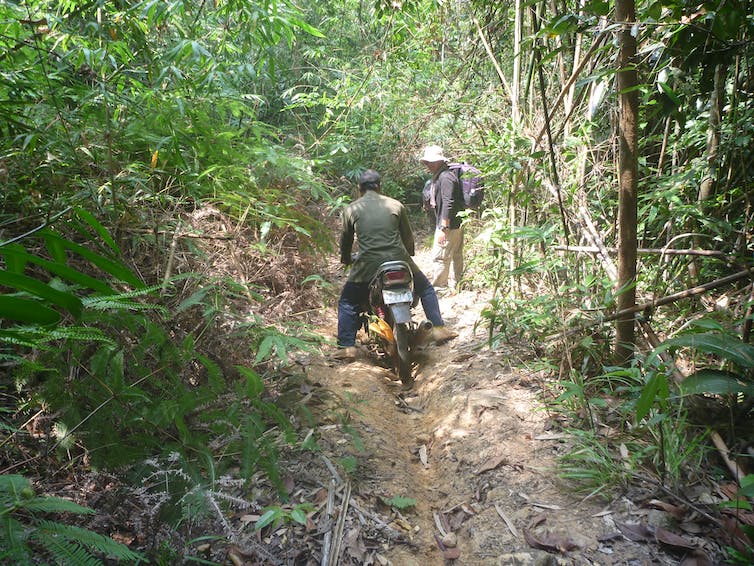 It took eight hours of travel through remote jungle paths to reach our first site. Author provided (No reuse)

Our journey would not have been possible without the help of Community Crocodile Wardens – local community members who patrol the jungle sanctuaries for threats and record crocodile presence. Wardens also conduct crocodile surveys further afield to discover new populations or to identify new areas of potential suitable crocodile habitat for juvenile releases.

Our recent study found to ensure the species survives, reintroduction locations must be protected from fishing pressure – both from a food supply perspective, but also from risk of entanglement in nets.

A species in decline

When we arrived at our site, northwest of the village of Thmor Bang, our day was capped by what we came to know as the standard evening downpour, despite assurances that we had, in fact, timed our trip for the dry season.

Kayaks were inflated, nets set, and sampling was underway. This proved laborious – to ensure crocodiles didn’t drown, we couldn’t leave nets unattended in the water overnight, but instead checked them every hour until morning.

Siamese crocodiles are generally not aggressive to humans, but they come into conflict with people when caught in fishing nets.

This often leads to the crocodile drowning and the fishing net being ruined. It’s a disaster on both counts, because fish is the only source of protein for many local communities in Cambodia. 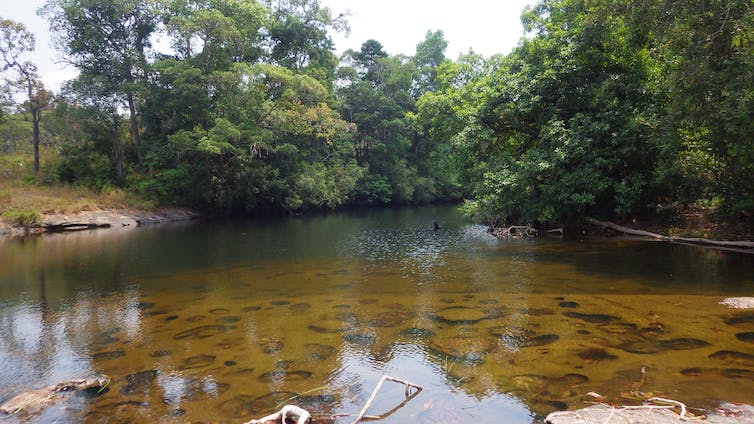 Like many other apex predators around the world, the Siamese crocodile is also in decline because of habitat destruction and poaching for their skins.

Their potential large size and generally placid nature means they are highly prized by crocodile farmers who use the skins for handbags and footwear. Crocodile farmers also often hybridise the Siamese crocodiles with other non-native crocodile species.

Read more: Scientists at work: bridging the divide between development and conservation in Cambodia

This means programs for Siamese crocodile reintroduction and breeding must carefully genetically screen all young crocodiles bred in captivity to make sure they’re not actually hybrids, so the “genetically pure” wild populations can remain.

Despite a pretty good understanding of captive Siamese crocodile behaviour and biology, very little is known about Siamese crocodiles in the wild, such as what they eat or how much food they need to raise an egg to adulthood.

Our only reliable indication of diet comes from scats (crocodile poo or “shit of croc” as we came to call it) collected along the river banks inhabited by remnant populations. 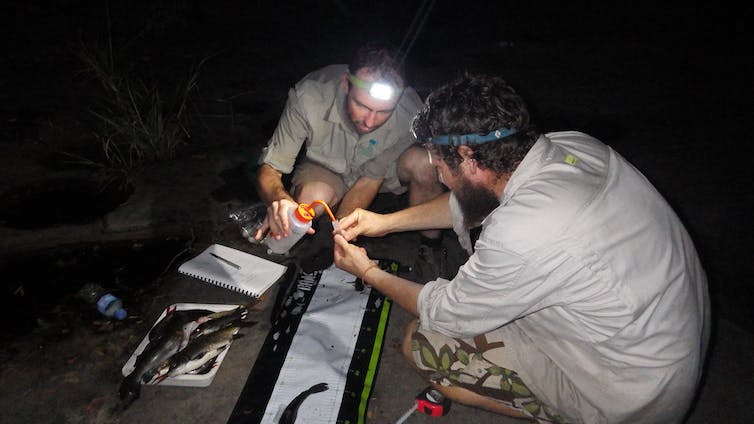 Collecting DNA samples from fish in the middle of the night. Author provided (No reuse)

Carefully collected poo samples containing scales and bones tell us fish and snakes make up a significant proportion of the Siamese crocodile diet.

But the shrouded, mystical, extremely remote and virtually inaccessible jungle in the Cardamom Mountains has ensured we know next to nothing about fish communities within habitats set for the release of captive crocodile. And this information is particularly important for prioritising release locations for captive bred juveniles.

We spent four days sampling fish communities and then repeated the process at two other equally remote locations within the Cardamoms, requiring two days travel between each.

We saw groups of gibbons moving through the forest and macaques climbing down from trees to drink at the river. But at last we spotted a wild Siamese crocodile after dark, swimming in our morning bathing pool, on our second-last day. 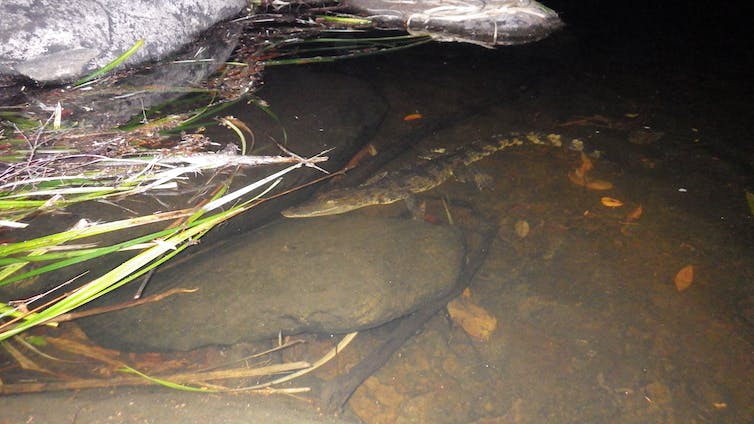 This is the only Siamese crocodile we saw, and it was swimming in the pool we used to bathe. Author provided (No reuse)

Ultimately, we distinguished 13 species of fish from the Cardamom Mountains, confirming the presence of two previously unconfirmed species groups for the region.

Understanding the food web of crocodile reintroduction sites is important, because conservation managers need to understand the ecological carrying capacity of the system – the number of individual crocodiles that can be supported in a given habitat. Learning this is especially important when historical information does not exist.

Preservation of fish stocks within Siamese crocodile habitats is critical for survival of the species. But a key challenge for natural resource managers of the Cardamom Mountains is balancing crocodile density with local fishing necessity, and to do this, we need more information on Siamese crocodile biology.