Did the velociraptors have feathers? – Evelyn Fisk, age 5, Portland, Maine.

Hi Evelyn. This is a good question because it tells us a lot about science versus movies.

Have you seen the movies Jurassic Park and Jurassic World? The first one came out in 1993, when your parents were probably kids. The second one came out much later in 2015, when they were already grownups.

But in the time between Jurassic Park and Jurassic World coming out, scientists made a lot of new discoveries about dinosaurs. Our ideas about what they might have looked like changed a lot.

Read more: Curious Kids: why did the dinosaurs die?

Back in 1993, we didn’t know which dinosaurs had feathers. But in 2007, quite a few years after the Jurassic Park movies were made, some people found a fossil Velociraptor arm bone with little bumps along its edge.

These bumps were where feathers would have grown from. This made palaeontologists (meaning dinosaur experts) think that Velociraptor had fluffy, feathery arms.

Palaeontologists then wondered if Velociraptor had feathers covering the rest of its body. 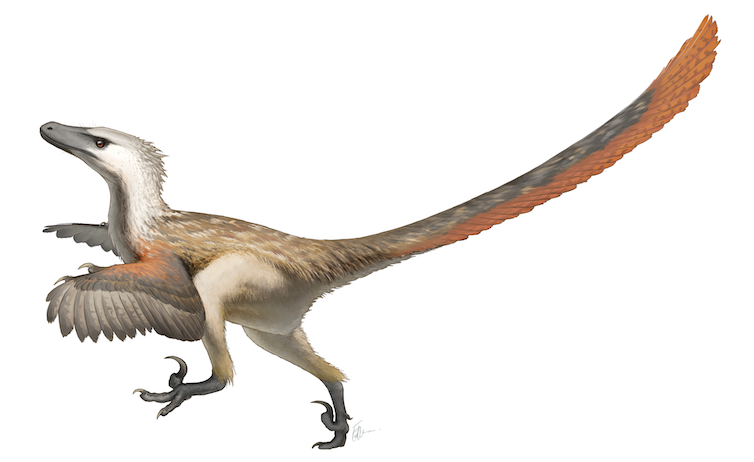 It seems most likely that Velociraptor had feathers on its whole body and not just its arms. This is an artist’s impression of Velociraptor mongoliensis. Fred Wierum/Wikimedia, CC BY

It’s hard to find dinosaur fossils with feathers. Dinosaur bone is hard and can become fossilised, and that’s why most dinosaur fossils are bony skeletons. Skin and feathers are soft and often rot before they can turn into fossils.

But sometimes palaeontologists are lucky and can find a “feathery” fossil. Since the 1990s, we have known about fossils of dinosaurs that were “cousins” to Velociraptor that had feathers on their arms, legs, and tails. But they didn’t fly like birds do.

They might have used their feathers to keep warm, or to “talk” with other dinosaurs by waving their tails and wings to make friends or to scare their enemies away!

It seems most likely that Velociraptor had feathers on its whole body and not just its arms.

If you have seen this movies, you will know that Velociraptors in Jurassic World (the more recent movies) don’t seem to have feathers. Even though we knew by then that they had feathers, the Velociraptors in the Jurrasic World movies look smooth and leathery, like in this clip (just ask your parents’ permission before you watch it, because it is a bit scary).

So some palaeontologists were pretty annoyed when the movie Jurassic World came out in 2015 and the Velociraptors didn’t have feathers at all. A character in the film actually gives an excuse, saying that (in the story) theme park customers wouldn’t want dinosaurs with feathers.

Movies don’t have to show dinosaurs like they were in the real world, but I think it would be really good if they did.

There is a lot of wonderful information we can see from dinosaur fossils, so why shouldn’t the movies share it and show off these fluffy, feathery beasts?