The number of cases so far this year, including more than 231 deaths nationwide, led the NSW opposition health spokesperson to call for hand sanitisers in public spaces to help slow the spread.

Along with getting vaccinated and staying home if you’re sick, washing your hands is the best defence against getting the flu.

If the government can make this easier by providing hand sanitisers in public places, it may be worth the investment. It won’t solve our flu problem but it might be an important tool in the toolbox of measures to reduce its spread.

The scientific literature on hand sanitisers isn’t so clear-cut.

A 2019 study in university colleges showed the use of hand hygiene and face masks didn’t protect against flu any better than mask use alone. But unlike some other countries, Australia doesn’t have a strong habit of mask use when people are unwell, so this may not be very helpful to us.

A 2014 study in New Zealand schools showed that providing sanitiser didn’t reduce the rate of absenteeism from school either.

While these studies make it sound like hand sanitiser is not very effective, that’s not the end of the story.

Other studies show a positive effect – a 16% reduction in respiratory illness in one and a 21% reduction in another. For some infections, the evidence is even stronger – for example, gastroenteritis, most of which is also viral.

However, few of these studies showing the benefits of hand sanitisers were done during a large disease outbreak, which means the potential benefit may be even greater. 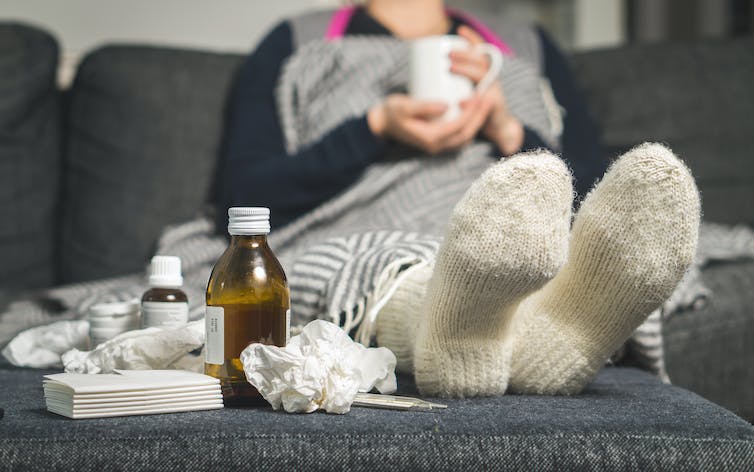 If you have the flu, the best place to be is at home. Tero Vesalainen/Shutterstock

Although preventing infection in hospitals is not the same as doing it in the community, there are two important lessons from hospital infection control.

This is partly because of the rapid effect of the alcohol, but mostly because it’s much quicker and therefore more likely that staff will use it.

The second important point from hand hygiene and other areas of hospital infection control is that introducing a “bundle” of strategies usually reduces healthcare-associated infection rates – even when the individual parts of these bundles don’t show benefits alone.

This could be because the individual effect sizes are too small, or that change in practice highlights a “safety culture”.

Sanitisers can be one of many strategies

Installing hand rub in public areas won’t solve this year’s flu outbreak by itself. But it can be part of a bundle of strategies – as long as the dispensers are kept topped up.

And it’s certainly a safe intervention – despite some desperate hysteria about the safety of hand gels, or the risk of people drinking them, there is little evidence this actually occurs in reality.

Hand sanitiser is also likely to be easier to implement than fixing the much larger social problem of Australians going to work when they’re sick. This may be because of inadequate sick leave, concerns about “letting the team down”, or other logistical problems such as child-care.

Get your flu vaccine – even now it’s still not too late – and get it for your kids as well, for their sake as well as your own.

Remember to stay home if you’re unwell, and always to cough into your sleeve. And don’t forget to clean your hands – even if the government doesn’t end up making it easier for you.

Read more: The 2019 flu shot isn't perfect – but it's still our best defence against influenza