Artistic depictions of several chemical elements feature in a new exhibition from today as part of Australia’s celebrations for the International Year of the Periodic Table.

They are the work of artists Damon Kowarsky and Hyunju Kim, who worked together since December 2018 on the renditions that will be on display at Quantum Victoria, a specialist science and mathematics centre in the northern suburbs of Melbourne. 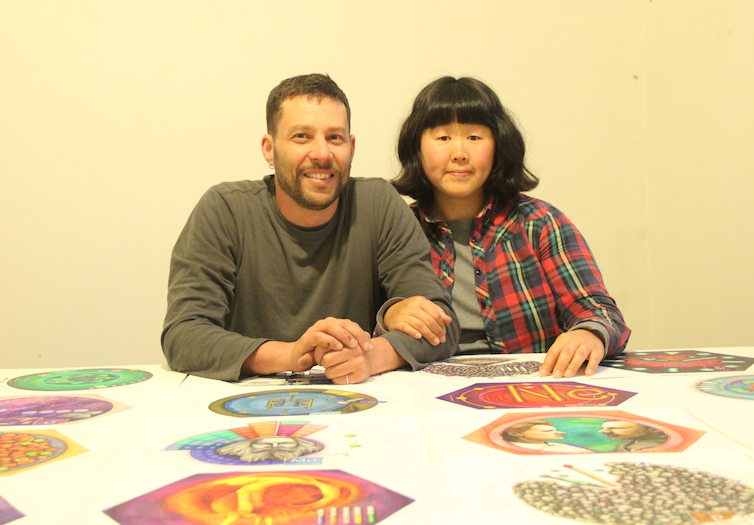 Read more: The periodic table: from its classic design to use in popular culture

So Damon and Kim were commissioned to produce a series of 51 artistic interpretations illustrating elements of significance in the story of the birth of the universe from the Periodic Table. 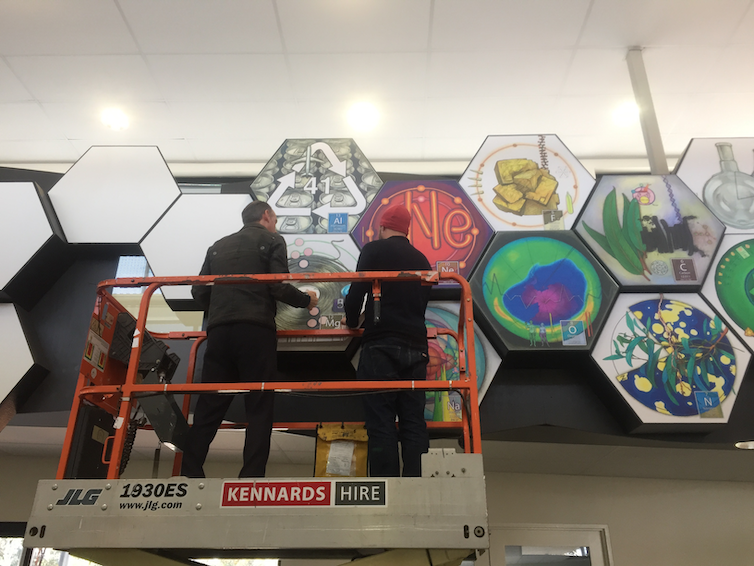 Mat Greentree and Damon Kowarsky installing some of the works at Quantum. Photo credit Hyunju Kim

While Kowarsky was responsible for creating the drawings of the panels, the colours are by Kim.

As scientists who work with many elements from a scientific point of view, we were curious as to how Kowarsky chose some of the representations he did, so we asked him to describe the artistic process for some of his favourite elements. 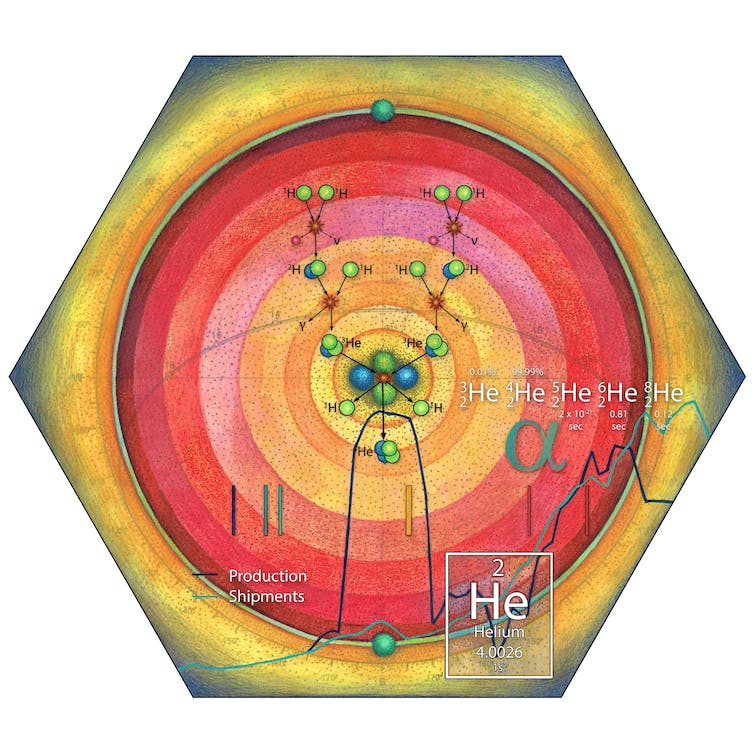 The helium (He) artwork. Damon Kowarsky and Hyunju Kim

Popular view: Used for balloons and to make your voice sound funny as it’s lighter and less dense than air.

Chemist’s view: An unreactive (noble) gas that is particularly useful in cooling applications – liquid helium at -269℃ is used to keep magnets at a superconducting temperature. Element with the lowest boiling point.

Artist’s view (Damon): Helium is colourless, odourless, tasteless, almost completely inert, not commonly found on Earth, and named after the Sun, whose image dominated the design I completed for hydrogen.

In many ways it’s the most abstract of elements, and this ultimately was the clue that unlocked the design. The background composition is structured around a chart showing the passage of the Sun through the sky at the latitude and longitude of Charles La Trobe College (in Melbourne, the site of the installation) on January 1.

Overlaid onto this is the sequence of helium formation in stellar nucleosynthesis, a graph showing the rates of production and consumption of helium (despite its prevalence in the universe it’s a finite resource on Earth) and the bars of the absorption spectrum that allowed this, the first ever extraterrestrial element, to be discovered. 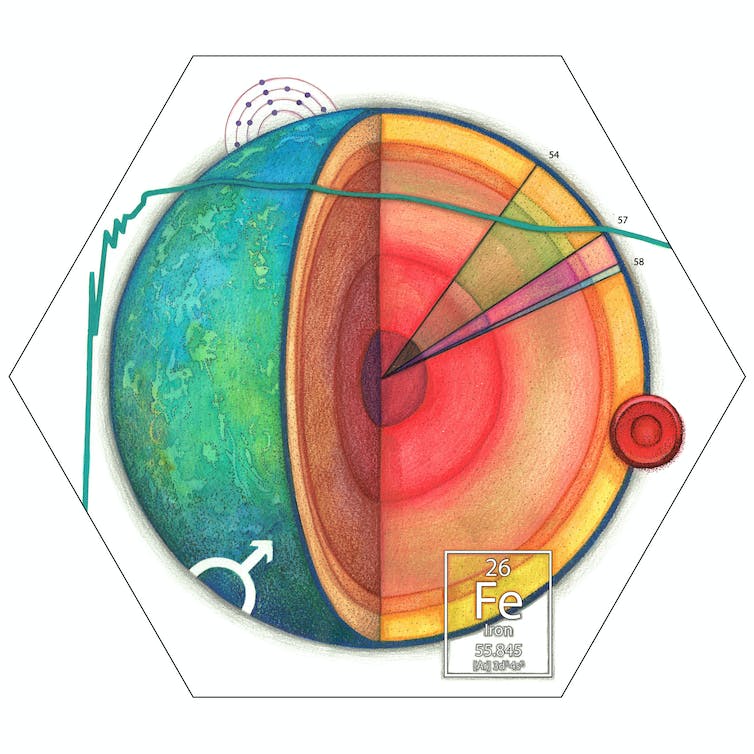 Popular view: Used to make steel. Iron ore is the source of much of Australia’s wealth. Found in blood.

Chemist’s view: The most common element on Earth, making up around 35% of the its mass. Iron is used to catalyse a very important chemical reaction, the combination of nitrogen and hydrogen into ammonia, an essential component of fertiliser.

Artist’s view: Iron is a pivotal element in the Periodic Table in terms of how the elements are created.

Showing a cross section of Earth allowed me to talk about its prevalence, maintain design coherence through the repetition of circles, and introduce bold and saturated colours. The smaller circle represents a red blood cell (iron is found in haemoglobin) and the pie charts show the relative distribution of iron isotopes.

In the bottom left corner the alchemical symbol for iron (Mars, the masculine attribute) breaks into the form of Earth. Alchemy is important as one of the foundations of modern chemistry and its symbols are historically and visually interesting. I didn’t want it to dominate though, so using a negative shape seemed a good way to balance all these concerns. 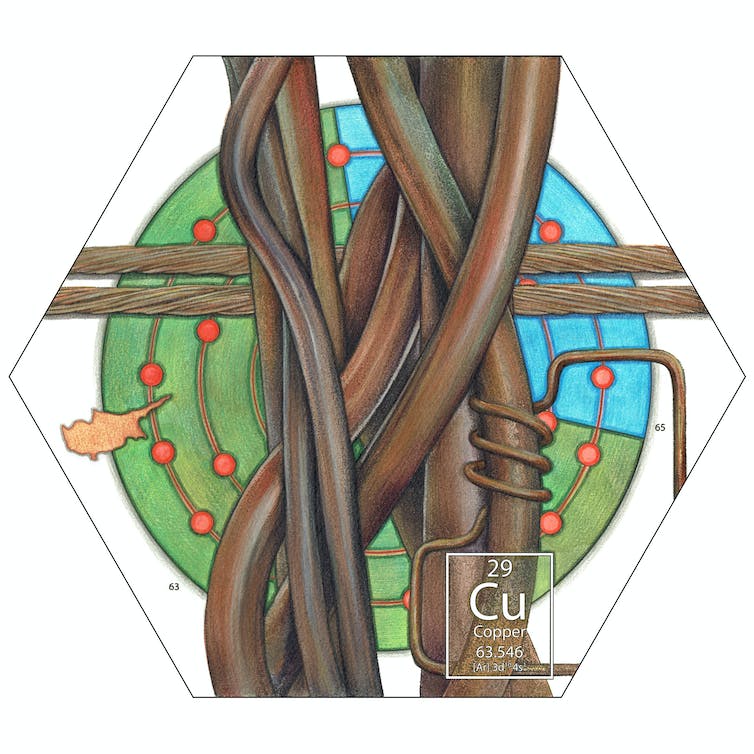 Popular view: For the older generation, copper pipes and 1 and 2 cent coins.

Chemist’s view: Metal with very high thermal and electrical conductivity. Very useful for catalysing some chemical reactions, especially a so-called click reaction where two molecules can be quickly linked together under mild conditions.

Artist’s view: With copper there’s the amazing colour and its history as one of the oldest metals known to humans.

I relied on the element’s utility and familiarity, and wanted to step away from symmetry and the geometric prevalence of circles. Even though copper is inorganic, its malleability and ductility lends an almost lifelike quality to its forms.

A map of Cyprus (copper is named for the place it was first discovered and mined) contributes to the overall balanced asymmetry of the design. 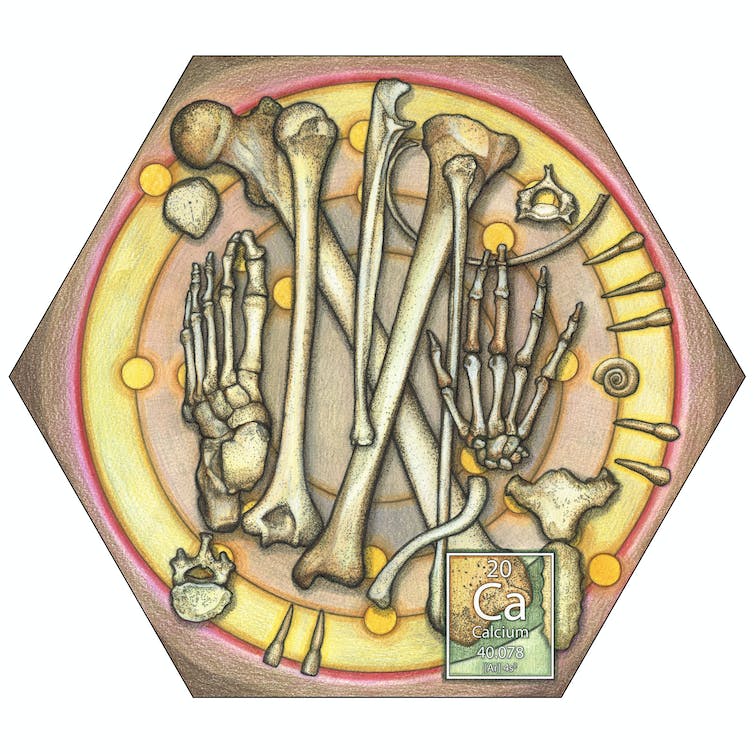 Popular view: Found in limestone, chalk and coral, and bones and teeth.

Chemist’s view: Highly reactive and the most abundant metal in the human body. As calcium chloride, used as a desiccant to remove water from air and solvents so reactions can be done anhydrously (without the presence of water, which can interfere with some reactions).

Artist’s view: Calcium is common in bones, shells and teeth. The challenge was finding images that were visually interesting and fitted the hexagonal shape.

Happily, this collection of human bones found on the web was neither articulated nor hopelessly jumbled. I was pleased how the curved bones (rib and collar) echo other design elements. 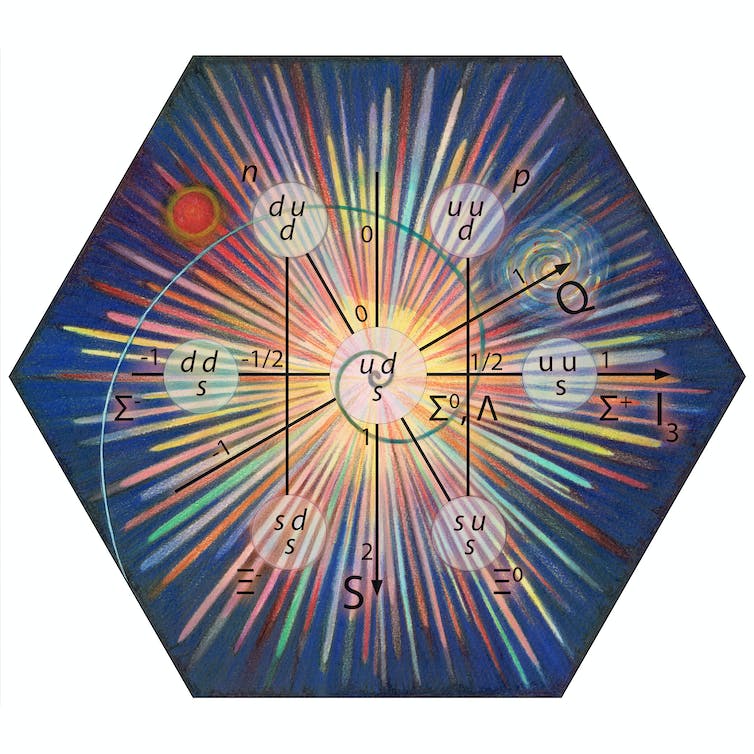 Shells of course follow the Fibonacci Curve, whose elegant spiral can be seen in the another panel of the exhibit (“Energy”), where it represents a timeline of the universe. 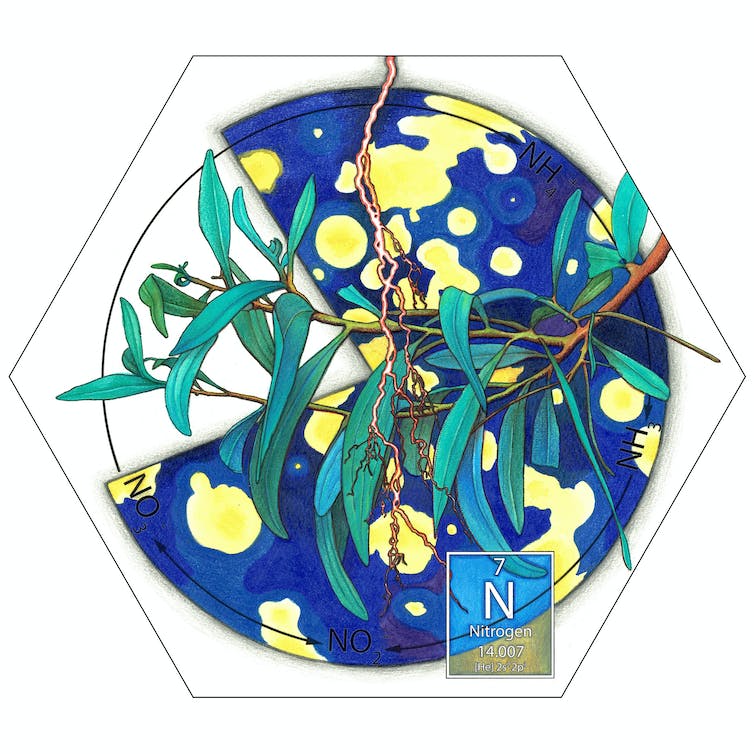 Popular view: Forms about 78% of Earth’s atmosphere, found in proteins and nucleic acids (DNA, RNA), and a key component of fertilisers.

Chemist’s view: The triple bond (N≡N) form of nitrogen found in the atmosphere, is the second strongest bond in any diatomic molecule (composed of two elements). Although problematic for chemistry, it is useful as it releases large amounts of energy when broken. This is used both for fertilisers and explosives, and remains an essential process in the chemical industry.

Artist’s view: Nitrogen compounds are essential for life. There are two main ways atmospheric nitrogen is converted to forms that are usable by plants and animals.

The first is lightning.

The second, and much less dramatic, is the symbiotic relationship between bacteria and the roots of certain plants. Typically these are beans and legumes but Australian wattles and acacias also contain nitrogen-fixing nodules.

Of course, Damon Kowarsky and Hyunju Kim are not the first to take an artistic look at the elements.

Other examples include a graphic artist’s version by Julie Hu to convey to non-scientists the richness of what these substances bring to our world.

Read more: Silver makes beautiful bling but it's also good for keeping the bacterial bugs away

Another is a periodic table printmaking project by Jennifer Schmitt, the daughter of a chemistry teacher mother and an artistic father, she grew up seeing beauty in science.

There is also a depiction of the elements as characters by Kaycie Dunlap, who was inspired by a desire make science more interesting by imagining what the elements would look like in our regular life.

Multiple quilting projects have drawn inspiration from sources such as the elements’ names, unique characteristics, and purposes (curated by artist Jill Rumoshosky Werner in 2015) or the wonderful stories about people, cultures, history, art, politics and science associated with them (curated by Kim Baird).

If you’d like to see them please call (03) 9223 1460 or email at admin@quantumvictoria.vic.edu.au to arrange a visit, as this is a school site (co-located with Charles La Trobe P-12 College).