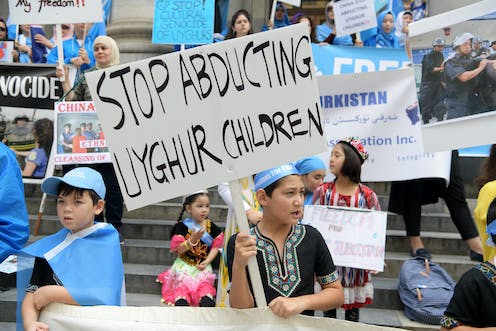 Two Australian universities, University of Technology Sydney and Curtin University, are conducting internal reviews of their funding and research approval procedures after Four Corners’ revealed their links to researchers whose work has materially assisted China’s human rights abuses against the Uyghur minority in Xinjiang province.

UTS, in particular, is in the spotlight because of a major research collaboration with CETC, the Chinese state-owned military research conglomerate. In a response to Four Corners, UTS expressed dismay at the allegations of human rights violations in Xinjiang, which were raised in a Human Rights Watch report earlier this year.

Yet, UTS has been aware of concerns about its collaboration with CETC for two years. When I met with two of the university’s deputy vice chancellors in 2017 to ask them about their work with CETC, they dismissed the concerns.

According to a report for the Jamestown Foundation, CETC openly declares that its purpose is “leveraging civilian electronics for the gain of the PLA (People’s Liberation Army).” Similar concerns had been raised about CETC’s military links and its work with the CSIRO.

Alex Joske, now an analyst with the Australian Strategic Policy Institute, and I had also uncovered a pattern of widespread research collaborations between academics at Australian universities and Chinese scientists and corporations connected to China’s armed forces and security services.

Along with UTS, ANU and UNSW are the most heavily invested. Some of the collaborations have been partly funded by the Australian Research Council. Some of our research was published in June and October 2017.

Some universities challenged over their associations have reacted defensively. Responding to a story questioning the wisdom of UNSW’s huge commitment to a China-funded “Torch Technology Park”, DVC Brian Boyle dismissed the evidence and suggested the criticisms were motivated by xenophobia.

When UTS teamed up with CETC in 2016 to collaborate on research projects worth A$10 million in its CETC Research Institute on Smart Cities, CETC was already working with the Chinese state to improve the world’s most comprehensive and oppressive system of surveillance and control of its citizens.

When asked about their collaborations with Chinese experts in military and security technology, universities have typically responded that all of their research proposals comply with the Defence Trade Controls Act, which restricts the export of technologies, including IP, deemed sensitive.

They were able to tick the right boxes on the relevant forms because it was possible to describe the planned research as “civilian.” But even well-informed amateurs know that the traditional distinction between civilian and military research no longer applies because major civilian technologies, like big data, satellite navigation and facial recognition technology, are used in modern weapons systems and citizen surveillance.

At the urging of President Xi Jinping, China’s government has been rapidly implementing a policy of “civilian-military fusion.”

UNSW scientists have collaborated with experts from the National University of Defence Technology (NUDT), a top military research centre, on China’s Beidou satellite system, which has many civilian as well as military uses, including tracking the movements of people and guiding missiles.

Having visited and studied at Australian institutions, these researchers, who hold rank in the People’s Liberation Army, return to China with deep international networks, advanced training, and access to research that is yet to be classified. In many cases, a clear connection can be drawn between the work that PLA personnel have done in Australia and specific projects they undertake for the Chinese military.

The same can be said for companies like CETC that take research output from Australian researchers and apply it to the security and surveillance technology used across China.

“Orwellian” seems inadequate for the types of surveillance and security technologies being implemented in China. Facial recognition scanners have even been set up in toilets to allocate the proper amount of toilet paper. The state tells you whether you can wipe your backside.

Some universities pass the buck by saying that the department of immigration is responsible for any security concerns when assessing visa applications for researchers. (Now the authorities are doing more checks, but the universities are grumbling because visas for Chinese scientists are taking too long.)

The universities’ refusal to accept any responsibility tells us there is a cultural problem. Most university executives believe that international scientific collaboration is a pure public good because it contributes to the betterment of humankind — and, of course, the bottom line.

So asking them more carefully to assess and rule out some kinds of research goes against the grain.

All of this suggests that the system is broken. The fact remains that Chinese military scientists and researchers at companies like CETC have been returning to China with improved knowledge of how to build better weapons and more Orwellian surveillance systems.

American universities are now alive to the problem by looking much more closely at the China links of scientists working in the US. So, in April 2018, it was reassuring to see the Australian minister of defence, Marise Payne, commission an inquiry into the effectiveness of the defence trade controls regime.

However, when it came time, the report failed to recognise Australia’s new security environment, especially the risks posed by China’s aggressive program of acquiring technology from abroad. It accepted the university view that the system is working fine and, apart from a few recommended adjustments to the existing Defence Trade Controls Act, kicked the can down the road.

In short, defence and security organisations, who can see how the world has changed, lost out to those who benefit from an open international research environment, one that has been heavily exploited by Beijing for its own benefit.

In the US, federal science funding authorities have been sending the message that continued funding will be contingent on universities applying more due diligence to the national security impacts of their overseas research collaborations. We can expect to see something similar in Australia.