When Grata Flos Matilda Greig walked into her first law school class at the University of Melbourne in 1897, it was illegal for women to become lawyers. But though the legal system did not even recognise her as a person, she won the right to practice and helped thousands of other women access justice. In defying the law, Greig literally changed its face.

That she did so is a story worthy of history books. And how she achieved this offers key insights for women a century later as they navigate leadership roles in the legal profession and beyond.

Flos, as she was known, grew up in a household full of possibilities unlimited by gender boundaries. Born in Scotland, as a nine-year-old she spent three months sailing to Australia with her family to settle in Melbourne in 1889. Her father founded a textile manufacturing company. Both parents believed that Flos and her siblings – four sisters and three brothers – should be university educated at a time when women rarely were.

She grew up firm in the knowledge that women could thrive in professional life, and witnessed that reality unfold as older sisters Janet and Jean trained to become doctors. Another sister, Clara, would go on to found a tutoring school for university students. The fourth sister, Stella, followed Flos to study law.

Women could not vote or hold legislative office, let alone be lawyers, when 16-year-old Flos began to study law. Yet she did not let this deter her. As she approached graduation she focused on, “the many obstacles in the path of my full success. I resolved to remove them”.

Other feminine aspirants, she noted, had previously wished to enter the profession, “but the impediments in the way were so great, that they concluded, after consideration, it was not worthwhile”.

Flos felt otherwise. She declared, even in 1903 when women were largely excluded from public life: “Women are men’s equals in every way and they are quite competent to hold their own in all spheres of life.”

Six years after entering the University of Melbourne, Flos witnessed the Victorian Legislative Assembly’s passing of the Women’s Disabilities Removal Bill, also known as the Flos Greig Enabling Bill. Suddenly, women could enter the practice of law. How had she made this happen?

While childhood had provided Flos with role models from both sexes, she did have to rely upon a series of men to navigate her entry into the exclusively male club of the legal profession. Her male classmates had initially questioned the capabilities of a woman lawyer and resisted her presence, but she soon persuaded them otherwise.

Not only did Flos graduate second in her class, but the men took a vote to declare – affirmatively – that women should be allowed to practice law. Their support undoubtedly fuelled her ambitions.

Next, Flos turned to one of her lecturers, John Mackey, who happened to also be a member of the Victorian Legislative Assembly. Together they worked with other supporters to craft the legislative change. Mackey argued that by passing the law, Parliament could ease the concerns of women who believed they could not get justice from a legislative body made up only of men.

Still, Flos needed to complete a period of supervised training known as “articling” before she could be sworn into the bar. No Australian woman had ever engaged in the “articles of clerkship” before. A Melbourne commercial law solicitor Frank Cornwall employed her, and she was officially admitted to the practice of law on August 1, 1905. 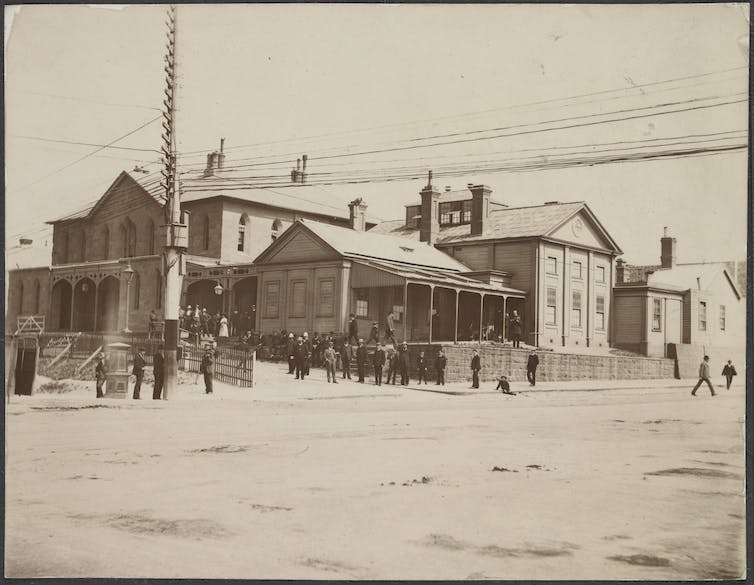 Supreme Court of Victoria circa 1905 when Flos was admitted to practice. State Library of Victoria.

At her swearing-in ceremony, Chief Justice John Madden described Flos as “the graceful incoming of a revolution”. He also expressed some scepticism about her future success:

Flos would prove him wrong about her knowledge of the world, both in law and in her other passion, travel.

At the ceremony, her name was the third called – in alphabetical order – before what was reportedly an “unusually large gathering of lawyers, laymen, and ladies … seldom seen in halls of justice”. Attendees noticed smiles that “flickered over the faces of the judges as they entered the crowded chamber” at the sight of Flos among her “somberly-clad male” counterparts.

News accounts focused more on the physical attributes of the first lady lawyer than her qualifications. When questioned by a reporter about her clothing choice for the occasion, Flos blushed, “What did I wear? Don’t ask me!” But then confessed, “Well, if you insist! I wore grey, with a greenish tinted hat, trimmed with violets!”

Another news reporter critiqued the flower-adorned hat as “a most unlegal costume”. As if there was any basis for making such an assessment – until that moment the nation had never seen the “costume” of a female lawyer. The media’s fixation with female lawyers’ appearance endures more than a century later.

Flos soon established a solo practice in Melbourne focusing on women and children. Among other endeavours, she represented the Women’s Christian Temperance Union in lobbying to establish the Children’s Court of Victoria. 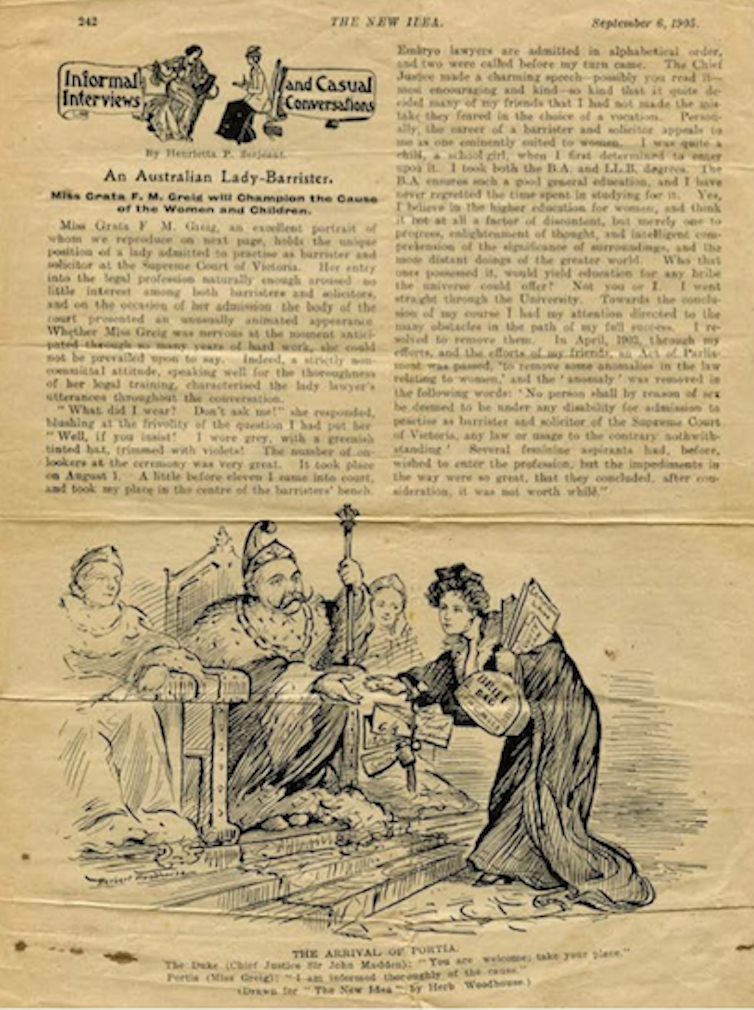 A news clipping about Greig and her work. Creative Commons, Courtesy of Australian Women’s Register.

Media fascination with Flos’s attire did not diminish once admitted to practice. She delivered a speech in 1905 to the third annual National Congress of Women of Victoria on a paper she wrote titled, “Some Points of the Law Relating to Women and Children”.

The reporter noted that Flos “treated her subject in a masterly manner, and gave an immense amount of useful and, at times, startling information”. But Flos’s “stylish, yet simple, gown of grey voile, with cream lace vest” was equally newsworthy as were “her pretty black hat and white gloves”. The fashion choices of other (male) speakers went unmentioned.

Flos also helped open the legal profession to other women. She founded The Catalysts’ Society in 1910. Two years later it became the prestigious Lyceum Club in Melbourne, devoted to advancing the careers of women and offering networking opportunities.

After the launch of the Women’s Law Society of Victoria in 1914, Flos was elected its first president. She cared deeply about the right of all women to vote, arguing in a 1905 debate that if “politics were not fit” for women, “the sooner they were made so the better.” (In 1908 Victorian women won the right the vote.)

Law was not Flos’s only pursuit. She travelled extensively. Two decades after graduating from law school, she took a lengthy trip through Asia, spending time in Singapore, China, Bali, Java, Malaysia and two weeks in the Burma jungle. She stayed in local homes and on her return, spoke to audiences about the experience, delighting them with tales of “leopards, tigers, wild pigs, peacocks, … and wild jungle fowl”. She lectured publicly and on radio stations about the geography, religion and race.

The end of her career took Flos to Wangaratta in Northern Victoria. She practised at a law firm headed by Paul McSwiney, and was known to explore the countryside in a “Baby Austin” tourer. She remained an activist, supporting higher education for women and the Douglas Credit Party, a political party that aimed to remedy the economic hardships of the 1930s depression.

Flos died in 1958. While she did not live to see other female firsts, such as the appointment of the first female Chief Justice of the Supreme Court of Victoria in 2003, Flos’ capacity to envision women as equals under the law places her among the profession’s greatest innovators.

Renee Newman Knake’s book Shortlisted: Women, Diversity, the Supreme Court & Beyond will be published by New York University Press in 2020.