What can be best measured gets best done, even if the scorecard is "balanced".Shutterstock 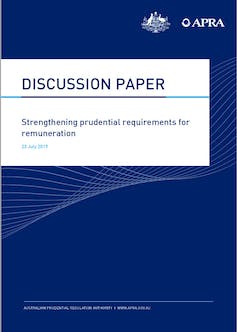 Casual observers of the financial services royal commission might be forgiven for thinking the days of sales-based commissions being paid to bank and insurance staff were over.

Australian Prudential Regulation Authority Casual observers of the financial services royal commission might be forgiven for thinking the days of sales-based commissions being paid to bank and insurance staff were over. Apparently not. The Australian Prudential Regulation Authority’s discussion paper on Strengthening Prudential Requirements for Remuneration, released last week, condones the ongoing use of “balanced scorecards” for determining bonuses. While possibly not as bad as the old bonus systems based only on sales or profits, a “balanced scorecard” – which also includes less tangible outcomes such as “customer satisfaction” – is not a good solution. In a study presented at the 2019 Financial Markets & Corporate Governance Conference, I and my colleagues Le Zhang from Macquarie University and Dominik Steffan from the Technical University of Munich find that balanced scorecards produce significantly worse outcomes than no bonuses at all, and create environments in which bad behaviour is more easily tolerated. Take 318 bankers… We asked 318 finance professionals to take part in 20-minute trading sessions in which they could transact up to 60 times, making decisions that in our simplified balanced scorecard approach were rewarded on the basis of both profit and following risk rules. In the other scenario, the reward was a flat payment, unrelated to performance. We found that the proportion of people who chose to consistently apply the rules dropped 16% under the balanced scorecard approach. For those who sometimes violated the rules, compliance dropped 24% when paid under the balanced scorecard approach. One reason might be that financial criteria such as sales and profits are easy to measure, and are audited, whereas other criteria such as following rules and providing good service are difficult to measure, at least in the short-term. ‘Balanced’ is unbalanced Customer outcomes are often measured with customer surveys such as the infamous net promoter score that asks whether they would keep using the service or recommend it to others. It works well for services such as restaurant meals, where customers can quickly form valid judgements. But when it comes to financial services, the quality of what they have been offered might not become apparent for years. When customers are disengaged or have low levels of financial literacy, or when products are complex, the quality may never be apparent! Complaints data bring other problems. One is that often customers don’t bother to complain. Another is that firms sometimes “pay off” disgruntled customers, leaving them satisfied but the underlying problems unresolved. The customers who never complain are left to suffer from poor practices and the complaints data give no meaningful information. Another popular solution is to rely on manager ratings in the performance assessments that determine bonuses. Manager ratings are often not credible. Academic researchers find that they are as much influenced by the managers own incentives and preferences as they are by performance. Managers need not tell the truth Managers keen to retain top performers in sales and profits can give them high ratings despite poor behaviour. Even more worrying, subjective performance ratings can be prone to favouritism, collusion and extortion. Nobel prizewinner Bengt Holmstrom predicted years ago that the balanced scorecard wouldn’t work, in his landmark paper on multitask principal-agent analysis. He found that when some criteria are easy to measure and others aren’t, employees will put most of their energy into the criteria that are easy to measure, in this case sales and profits. Balanced scorecards are inherently unbalanced. Read more: There's no evidence behind the strategies banks are using to police behaviour and pay What’s the solution? One might be deferrals – bonuses based on financial performance that are held back for multiple years. Over time, and with active regulation, it would become obvious whether profits have been generated by fair means or foul. If foul, the bankers would not be eligible to receive what they thought they had earned. A better idea might be to revert to a system of fixed salaries with no bonuses. It works for most Australians, and it used to work for bankers. Read more: Confiscate their super. If it works for sports stars, it could work for bankers