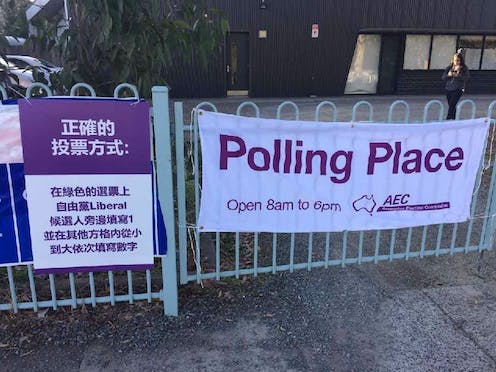 So read the headlines on Wednesday. But what is the law behind these election petitions?

My new book, The Law of Politics, offers a detailed examination of the laws surrounding Australian elections. Here, I’ll offer a potted explanation of the substance and process at play in the challenges to the results in these two Victorian seats at the 2019 federal election.

Amid all the recent concerns about online political disinformation worldwide, and about MPs’ qualifications in Australia, it is almost reassuring to be back on the terrain of old-fashioned, misleading campaign material.

The petitions allege that physical posters used at polling stations by the Liberal Party were likely to mislead electors in “casting” their votes.

The posters were written in Chinese and used in two seats with significant proportions of Chinese immigrants. Headed “CORRECT VOTING METHOD”, the posters went on to advise electors to vote “1” for the Liberal Party, then number the other boxes. The posters were authorised, in small print at ankle height, by the Liberal Party. But their appearance aped the purple and white used by Australian Electoral Commission posters.

Outside South Australia, there are no “truth in political advertising” laws in Australia. So what constitutes the offence of misleading an elector in casting a vote?

At its crudest, you cannot publish false addresses of how or where to vote. Nor can you claim false party affiliations or mimic other parties’ how-to-vote material.

The commission did not seek to have the posters removed on election day. It’s hard to get a court injunction in the space of a couple of hours. The commission doesn’t have copyright in its colours, but having spent public money establishing a brand, it needs to protect it. Instead, an independent candidate and another citizen have filed these petitions.

Election petitions go back centuries. They aren’t vehicles for purifying elections. They are tough to mount and to win.

The first hurdle was a tight time limit. The petitions had to be filed within 40 days of the election “writs” being finalised. That’s just 40 days to brief lawyers, assemble basic evidence and plead the claim.

As for winning a case – which means forcing a fresh election in either seat – it is not enough to show that the posters were likely to mislead. It must also be shown that the election outcomes were likely to have been affected.

In Kooyong, Josh Frydenberg’s margin over the Greens was 11,289 votes. There is no way upwards of 6,000 electors not only read and understood the signs, but were likely to have been fooled into voting differently.

In Chisholm, Gladys Liu’s majority over Labor was 1,090. It’s theoretically feasible that over 550 voters were swayed, especially as Chisholm is heavily populated with Mandarin and Cantonese speakers (both groups can read Chinese script).

But how could this be proven? Might a psephologist like Antony Green be called? Is there any evidence of a strong and clear benefit to the Liberal vote where the posters appeared, as opposed to results at, say, early voting booths? And what is the control group for such comparisons?

One quirk of election petitions is uncertainty about where the onus of proof lies. On one view, the petitioner must prove their case on the balance of probabilities. It’s a big thing to unseat an MP and march the voters back to the polls.

On another view, elections are about public trust, so if the posters seem legally dodgy and widespread, it is up to the Liberal Party to demonstrate there was little chance the election result was affected.

On top of this, the law beseeches the court to act quickly. The status of parliament needs to be finalised sooner rather than later. The High Court usually does not try fact-heavy petitions, so it’s likely to refer them to the Federal Court.

Then there’s the question of legal costs. In civil cases, costs are routinely awarded to the winning litigant. This isn’t to punish the loser, but to indemnify the other side for the decision to keep litigating.

But, as we just noted, election petitions are not routine commercial litigation. There is an overarching public interest at stake.

If the Liberal Party is found to have engaged in misleading behaviour, the court can require it to bear the costs of its defence. That happened to the Labor Party in a Queensland case.

It’s folly to predict the outcome of litigation without hearing the case. But it’s telling that the Labor Party, which would stand to gain most from a fresh election especially in Chisholm, has not sued.

From this vantage, the court may well find the Liberal Party breached the law and therefore must bear most of its own costs.

But there is no way Frydenberg’s win in Kooyong will be imperilled, and it would take an intuitive leap to find that Liu’s majority in Chisholm is unsafe.

In short, the petitioners may win the battle but lose the war.