The past few weeks has seen a drastic escalation in violence on the streets of Hong Kong. On Tuesday night, a police officer aimed a shotgun at protesters who had gathered outside a police station, while a car launched fireworks into the crowd.

And the week before, following a protest of 430,000 people, vigilante thugs, dressed in white and carrying bamboo sticks, beat up democracy protesters at a train station.

This long summer of protests began in response to a proposed extradition bill just days after the 30th anniversary of the Tiananmen Square massacre. But now, over eight weeks on, the protesters continue to take to the streets with a broader set of demands – and the confrontations with police are threatening to spiral out of control.

With reports of a build-up of Chinese forces on the Hong Kong border, and no end in sight to the demonstrations, many are now asking - how will this end?

Conflict arising from the Umbrella movement

Protest is a familiar tactic in Hong Kong, but this movement has adopted a series of new approaches from the lessons of other protests over the last 30 years – in particular the failures of the 2014 Umbrella Movement.

In doing so, they are building something that is - at least until now - showing resilience to Beijing’s authoritarianism.

The current protest movement isn’t a single movement. It has two dominant wings – one is passive, the other more militant. These wings accept and recognise each other’s role.

This is new. In 2014, Hong Kong democracy leaders staged a 79-day occupation to fight for universal suffrage. Called the Umbrella Movement, the occupation had two sets of leaders - older democracy leaders (known as the Occupy Trio) and younger student leaders (notably Joshua Wong and Nathan Law).

Originally, the Occupy Trio had planned a multi-year campaign to build public and political pressure for universal suffrage, but the students were more confrontational. They staged a sit-in at Civic Square on Hong Kong Island and the occupation was off and running.

During the occupation, these different views led to irreconcilable conflict, making it impossible to talk about overall strategy. When the occupation finally ended – without achieving universal suffrage – there was great acrimony between the groups that lasted for years.

A new set of principles

Realising how counter-productive this split was, the protesters were keen not to let strategic differences get in the way this time around.

As organisers made plans for the June 9 rally against the extradition bill, several new principles emerged to define how the different groups could work together and avoid falling into the deep conflict of the past.

They included such maxims as “respect the role of the different groups”, “we all lead”, “no one is left behind” and “be water” (as in, to flow from place to place, building continuous pressure). More than the power of any individual leader, these principles came to define how the movement would function and grow.

The principles reinforced one another. The decision not to have a single leader was born from the experience of the Umbrella movement. Every visible leader of that movement was jailed or threatened with jail following the occupation. (Two of the Occupy Trio received 16-month jail sentences this year).

The Extradition movement learned it was too dangerous to have figurehead leaders. If everyone led, what could Beijing do? They couldn’t jail everyone.

And when it came to respecting the role of different groups, this principle allowed those who wanted to pursue a more militant strategy to do so without fear of rebuke. Everyone was encouraged to do what they thought was needed.

On June 9, two movements launched: a peaceful protest of more than one million people, as well as a more militant movement of young people.

The confrontational wing was battle-ready. They had re-purposed everyday items like medical masks, plastic wrap, helmets, goggles, umbrellas and towels into tools of protest. The Umbrella occupation had taught them the police would likely use excessive force – so they dressed accordingly. 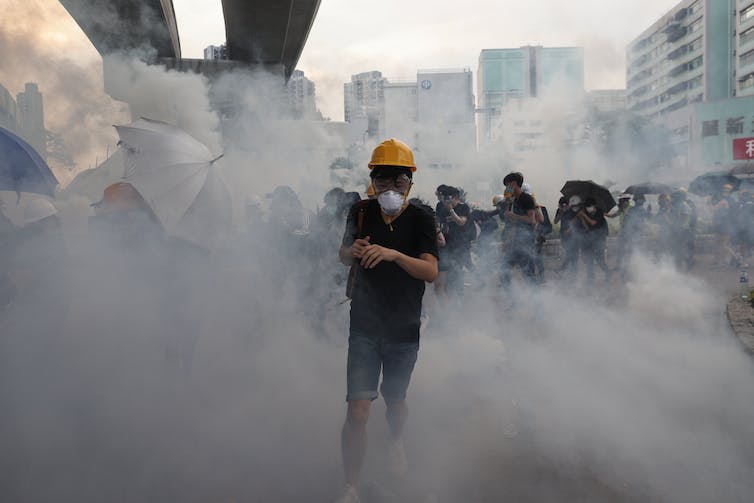 Hong Kong leader Carrie Lam was unmoved by a million-person march, but did shift her position and suspend the extradition bill when faced with a street confrontation. This sent a loud message to the protesters about what it will take to win under her authoritarian government - militancy was more potent than passive protest.

Protesters got the message. Every mass protest since then has seen these two protest wings in operation. As an elected member of Hong Kong’s government explained to me, they are “codependent” - they need each other to exist.

The two wings initially unsettled Beijing. Every time there was militancy – most dramatically when the Legislative Council Building was vandalised on July 1 – Beijing thought it could be used to their advantage.

The government aired the violence on television, hoping it would turn public opinion against the protesters and split the movement. Yet, older democracy leaders did not criticise the students, instead reiterating that “everyone in the movement has their place.”

Popular opinion is still with the protesters, and the protests are still enormous.

Flowing from protest to protest

Another form of protest also emerged to supplement the two-wing approach – the movement turned “to water”.

The protests now have a flow they didn’t have during the Umbrella occupation. Protesters don’t simply show up for weekly mass marches and then go home; they have begun organising smaller protests in their districts on a daily basis.

“Lennon walls” featuring thousands of protest messages have emerged, for instance, in every one of Hong Kong’s districts. Random Airdrop notifications share details about impromptu protests, such as last week’s sit-in at the airport. With everyone leading and the action constantly flowing from one place to the next, this protest is hard to stop.

The Umbrella movement, in contrast, was physically fixed in three locations and maintained with tents and nightly sleep-outs. The rigidity of the occupation was exhausting and took a toll on the participants.

A government can wait out an occupation, but how do you capture something that is constantly moving? 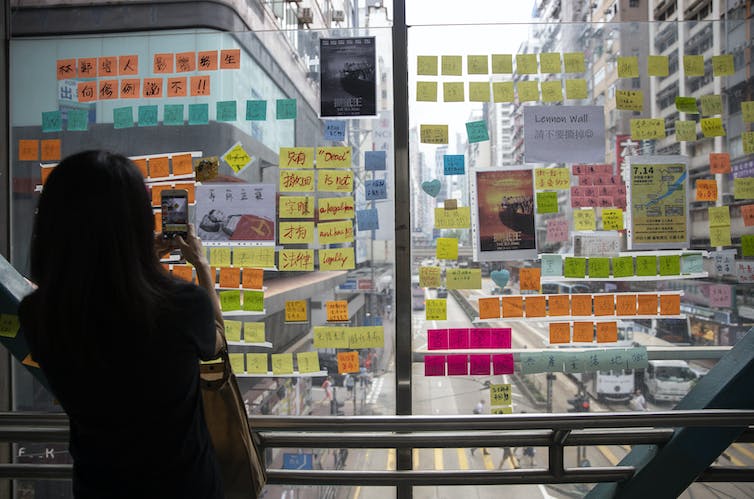 Lennon protest walls have sprouted up on walls and pedestrian bridges across the city. How Hwee Young/EPA

Where will it end?

Its hard to predict where the current protest movement goes next. At the moment, there are no negotiations between the government and protest leaders. The protest movement has five key demands that continue to sit on the table, ranging from withdrawing the extradition bill completely to an independent investigation into police brutality to Lam’s resignation.

But it is unclear whether the protests would end even if the demands are agreed to. All the while, Beijing makes infrequent statements in support of Lam, but it also has thousands of troops already stationed in Hong Kong – and a build-up of more across the border.

What is certain is that a long-standing democracy movement has powerfully connected to the next generation. Young students are terrified about their future and feel they have to do everything they can to fight for their rights.

But the stakes are extremely high. Is it possible for water to move so quickly that it escapes the barrel of the gun?