A group of the world’s poorest fishermen are protecting endangered whale sharks from being finned alive at Oslob in the Philippines.

The fishermen have stopped fishing and turned to tourism, feeding whale sharks tiny amounts of krill to draw them closer to shore so tourists can snorkel or dive with them.

Oslob is the most reliable place in the world to swim with the massive fish. In calm waters, they come within 200m of the shore, and hundreds of thousands of tourists flock to see them. Former fishermen have gone from earning just a US$1.40 a day on average, to US$62 a day.

Read more: Whale sharks gather at a few specific locations around the world – now we know why

Our research involved investigating what effect the whale shark tourism has had on livelihoods and destructive fishing in the area. We found that Oslob is one of the world’s most surprising and successful alternative livelihood and conservation projects. 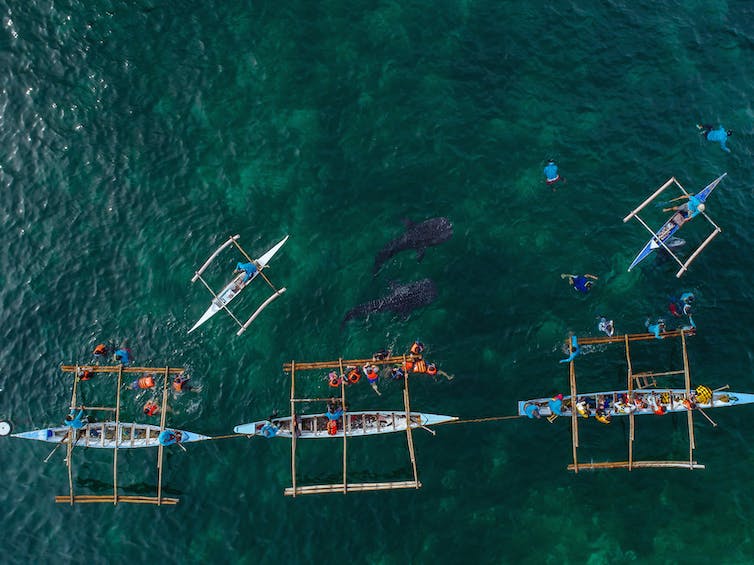 A drone shot of whale shark tourism, about 100 metres from shore. The small boats with one person are feeders. The longer boats are for the tourists swimming with face masks to see the whale sharks. Luigi Borromeo

Much of the rapidly growing population depend on fish as a key source of protein, and selling fish is an important part of many people’s income. As well as boats fishing illegally close to shore at night, fishermen use compressors and spears to dive for stingray, parrotfish and octopus. Even the smallest fish and crabs are taken. Catch is sold to tourist restaurants.

“Finning” is a particularly cruel practice: sharks’ fins are cut off and the shark is thrown back into the ocean, often alive, to die of suffocation. Fins are sold illegally to Taiwan for distribution in Southeast Asia. Big fins are highly prized for display outside shops and restaurants that sell shark fin products. 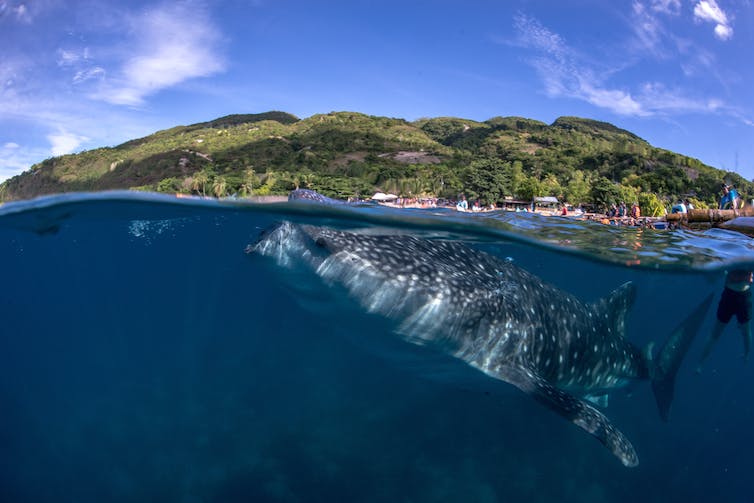 Destructive fishing has declined. Fish stocks and catch have increased and species such as mackerel are being caught for the first time in Tan-awan, the marine reserve where the whale sharks congregate.

The decline in destructive fishing, which in the Philippines can involve dynamite and cyanide, has also meant there are more non-endangered fish species for other fishers to catch.

The project in Oslob was designed by fishermen to provide an alternative to fishing at a time when they couldn’t catch enough to feed their families three meals a day, educate their children, or build houses strong enough to withstand typhoons.

“Now, our daughters go to school and we have concrete houses, so if there’s a typhoon we are no longer afraid. We are happy. We can treat our children to good food, unlike before,” said Carissa Jumaud, a fisherman’s wife.

Creating new forms of income is an essential part of reducing destructive fishing and overfishing in less developed countries. Conservation donors have invested hundreds of millions of dollars in various projects, however research has found they rarely work once funding and technical expertise are withdrawn and can even have negative effects. In one example, micro-loans to fishermen in Indonesia, designed to finance new businesses, were used instead to buy more fishing equipment. 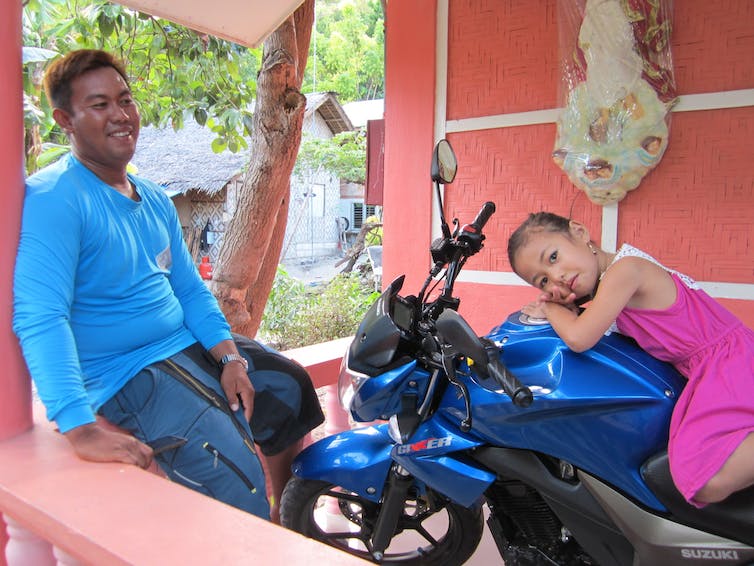 Former fisherman Jesson Jumaud with his daughter Kheny May, who now goes to school. The profits of whale shark tourism mean they now have a brick house, and Jesson was able to buy a motor bike. He can feed their family three times a day with good food. Judi Lowe, Author provided

Feeding whale sharks is controversial, and some western environmentalists have lobbied to shut Oslob down. However, a recent review of various studies on Oslob found there is little robust evidence that feeding small amount of krill harms the whale sharks or significantly changes their behaviour.

Read more: Are sharks being attacked by killer whales off Cape Town's coast?

Oslob is that rare thing that conservation donors strive to achieve – a sustainable livelihoods project that actually changes the behaviour of fishermen. Their work now protects whale sharks, reduces reliance on fishing for income, reduces destructive fishing, and increases fish stocks – all while lifting fishermen and their families out of poverty. Oslob is a win-win for fishermen, whale sharks and coral reefs.