Day was taken into police custody from a regional Victorian train in 2017, despite being unconscious and in need of medical attention, under the offence of public drunkenness. While in the lock-up, she suffered a traumatic brain injury. She died seventeen days later, without regaining consciousness.

Although public drunkenness is now set to be decriminalised in Victoria (leaving Queensland as the only state with the crime on its books), its criminalisation at the time of Day’s death, and how it set in motion a chain of events that caused her death, illustrates how systemic racism can operate.

Why? Because public drunkenness, since long before the Royal Commission into Aboriginal Deaths in Custody almost 30 years ago which recommended its decriminalisation, was a highly racialised offence.

The literature suggests its growing enforcement since the middle of last century operated to control a mobile Indigenous populace after the protection policy era that saw Indigenous people put on reserves, and their behaviours controlled by state government bodies.

Read more: FactCheck Q&A: are Indigenous Australians the most incarcerated people on Earth?

In places where the offence remains, its enforcement is highly-discretionary. This is because it’s a crime most people have committed, or commit regularly, yet 29.6% of all people imprisoned for public order offences, including public drunkenness, are Aboriginal or Torres Strait Islander.

Yet, once the crime is “off the books”, we know policing and protective practices can still produce similar outcomes. 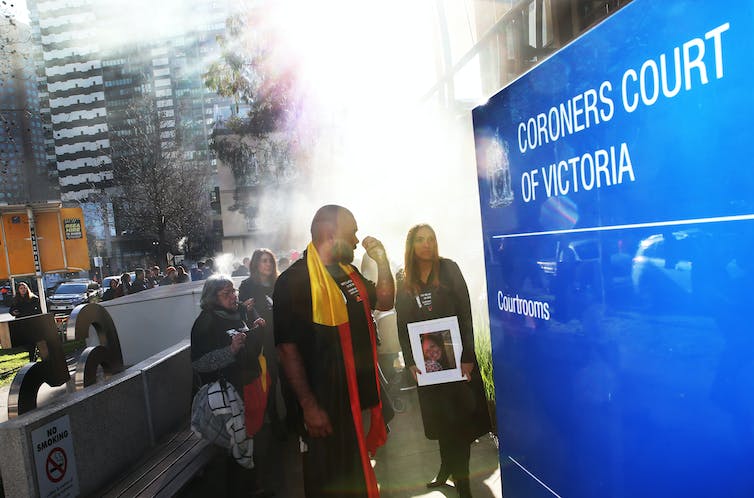 Indigenous women are the most incarcerated demographic in Australia. David Crosling/AAP

For instance, Rebecca Maher, a Wiradjuri woman, was placed under protective custody in NSW, a state which has decriminalised public drunkenness. When officers did not call an ambulance for her overnight and failed to adequately care for her in their custody, she died.

How do we explain these divergences?

Systemic racism offers us some answers — not only on how Day died in a prison system, but also on how that prison system comes to be and behave in a way that targets Indigenous women like her.

So what is systemic racism?

At its most simple level for the purposes of this short article, systemic racism is a way of thinking about racism as a system, rather than just as an individual’s bias or prejudice.

It is distinct from forms of racism like casual racism (normalised, but explicit, racist gestures) and unconscious or implicit biases (unintended judgements and actions based on long-standing perceptions and power). But still, it is related to them.

Systemic racism creates the architecture around which other forms of racism are enabled, supported and justified.

rules, practices and habits which systematically discriminate against or in some way disadvantage Aboriginal people.

It can be helpful to think of systemic racism as having two parts that work together to create conditions of marginalisation and oppression for Indigenous people and people of colour, and advantage for white people and ethnic majorities.

Those two parts are institutional racism and structural racism.

Read more: Legal and welfare checks should be extended to save Aboriginal lives in custody

Institutional racism is expressed in institutions — their policies, procedures and preferences — like in courts, schools and hospitals

Structural racism is concerned with how a society organises itself around race.

Why this inquest is the first to consider systemic racism

This is sometimes called epistemic and ontological racism, and because of this and their own institutional racism, Coroners Courts have historically been silent on or complicit with systemic racism.

Read more: The Imagination Declaration: young Indigenous Australians want to be heard – but will we listen?

Thanks to the tireless work of the family and their vision of justice for Day, the inquest will consider:

While this is, of course, not enough to understand the full range of systemic racism that may have led to Aunty Tanya Day’s death, it’s a crucial starting point to understand racism against Indigenous peoples as lethal and endemic.