In the 30 years I worked as a protest police liaison, one memory in particular stands out. I once attended a protest where a group of women attempted to block a forestry road by lying together with linked arms and legs.

The ensuing melee as a group of male police attempted to pull apart the screaming women using pain compliance grips (moves to defeat the resistance of an arrestee, such as hyper-extending their wrist) was a chilling spectacle.

“Lock-on devices” – hardware like bicycle locks or handcuffs protesters use to secure themselves in their place of protest – would have provided a safer way of achieving the same result. And this was recently seen last week in Townsville.

Two elderly women locked themselves to the gates of a pipe supplier believed to have been contracted to supply the Adani mine project. Police took several hours to remove the arrestees, while the rest of the protest group was ordered to move across the road to continue the gathering.

The role of a police liaison includes walking police to lock-on installations and, if necessary, explaining the situation to them. What often follows is a negotiation about where the rest of the crowd can lawfully stand while police attend to the lock-on.

As a tool of non-violent civil-disobedience, using “lock-on” devices avoids risking group stand-offs with police, which can end up worse than rugby scrums. These devices certainly cause inconvenience, but it’s difficult to imagine how a person with one or both hands locked into a device could be anything but non-violent.

But the Queensland Premier Annastacia Palaszczuk recently proposed laws to outlaw the possession or use of protest lock-on devices.

While no bill has yet been presented, media reports suggest severe penalties will be imposed, including prison terms and large fines.

A war of words has erupted, with Palaszczuk referring to the use of lock-ons as part of the “sinister tactics” of climate change protesters. On the other hand, environmentalists and civil liberties groups, and even some in the state Labor party, condemn the proposed anti-protest laws as an assault on democracy.

Part of Palaszczuk’s rationale is that there have been instances of some lock-on devices containing dangerous items, such as glass or gas canisters aimed at deterring police. However, protest groups say no evidence has yet been provided to show this happening.

In any case, the possible issue could be better dealt with under existing legislation, or new legislation specifically targeting traps, rather than being used to justify a complete ban on all lock-on devices.

So what are lock-on devices?

Climate change protests are on the rise in Queensland, with groups like Extinction Rebellion and Front Line Action on Coal regularly using lock-on devices as part of the campaign to halt work on the Adani coal mine.

Lock on devices range from readily available bicycle locking devices through to home manufactured steel pipes, or concrete filled barrels in which protesters secure their arms to create a human obstruction.

They are favoured by activists – and clearly feared by some politicians – because they take significant time and expertise for police to remove protesters from the devices and to clear roads and blocked gateways. 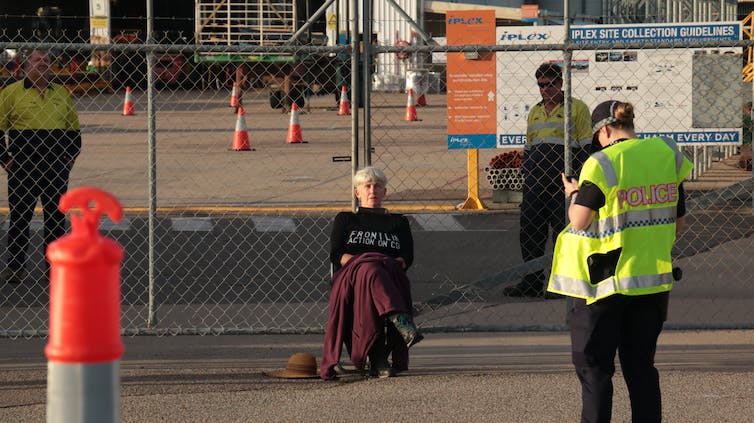 And they have a long history as a tool of non-violent civil disobedience that goes back at least to the days of the suffragettes. More recently, they have been an important tool in blockades against old growth forest logging, coal seam gas and coal mine developments.

Attempts to ban these devices

Queensland isn’t the first state to try to ban lock-on devices. Similar laws were attempted in Western Australia in 2015, but drew extensive criticism from human rights groups including the UN High Commissioner for Human Rights, who released a statement saying:

Three United Nations human rights experts have urged the State Parliament of Western Australia not to adopt new legislation which would result in criminalising lawful protests and silencing environmentalists and human rights defenders.

The laws were abandoned in Western Australia following a change of government in 2017.

New South Wales has a law allowing police to seize lock-on devices, but it’s not an offence to possess or use these devices.

Despite the recent political furore in Queensland, police and protesters alike generally respond to lock-on devices during protests in a calm and orderly fashion.

In fact, rather than being used by “extremist” protesters, there are incidents of senior citizens, war veterans and sports celebrities using this tactic.

It’s important to understand the philosophy behind “locking-on”. By choosing to put their own bodies in a vulnerable situation, the protesters are appealing to the humanity of police or others to treat them with care and respect.

The presence of lock on devices, particularly at blockade style protests, actually helps to maintain a peaceful, almost theatrical atmosphere for police and protesters alike.

The arrestee is passive, the police can act without interference and the rest of the protesters attend lawfully. 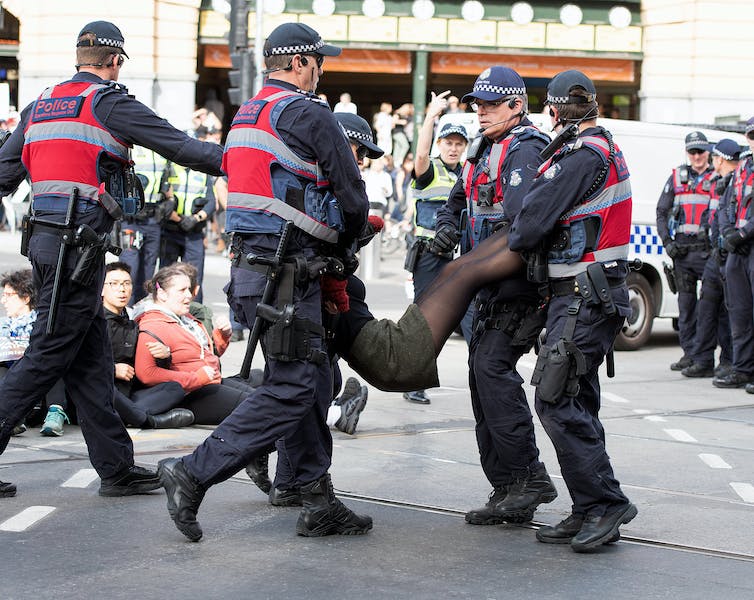 Vegan protests in Melbourne earlier this year saw protesters dragged away by police. Lock-on devices on the other hand help to avoid the need for bodily contact. Ellen Smith/AAP

As a symbol of non-violence, the lock-on celebrates a shared social contract where there is implicit trust that neither police nor protesters will use personal violence, but rather the rule of law will prevail in an orderly manner.

In societies where the rule of law and respect for human life have broken down, it would be extremely dangerous to disable yourself in front of your opponents. The safe use of lock-ons as a tactic for civil disobedience is a sign human rights and the rule of law are being respected on all sides.