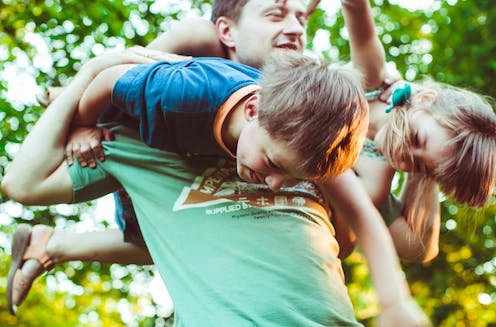 Play is an important way for children to learn about the world around them.

Through play, they learn cultural norms, socialisation guidelines and experiment with different ways to interact with their environment.

But play between a father and their child or children can offer a different type of play. It’s often boisterous, physical and competitive, and this all has an equally important role to play in a child’s development.

A bit of rough-and-tumble play, looks like fun for dad and the kids!

Dads often engage in activities such as play wrestling and throwing their child into the air.

Up in the air!

This type of play is full of excitement and challenge, and if it weren’t for the clear enjoyment of both parties, it might sometimes seem a little aggressive to an outsider.

Of course, rough-and-tumble play doesn’t have to be exclusive to dads. Mums can also engage in such play with their kids and, although that’s not been the subject of research to date, there’s no reason the results can’t be just the same.

In one study we looked at the quality of father-child rough-and-tumble play, and children’s emotional and behavioural problems.

High-quality rough-and-tumble play was defined as being warm and sensitive, dominance-sharing and playful in nature.

We found high-quality play was related to higher levels of what’s termed prosocial behaviour. Prosocial behaviour includes things like being considerate of other people’s feelings and sharing well with others.

In other words, high-quality rough-and-tumble play is linked to nice children who are probably going to have an easier time making friends with their peers.

Dads have a tendency to push their kids to the limit, to set goals that are just a bit beyond their reach, and to rough-and-tumble play in a way that gets the kids worked up.

Good rough-and-tumble play is play where the kids don’t just get worked up and potentially frustrated, but where the child learns how to handle these emotions – how to regulate them.

This is important as better emotion regulation allows children to understand and manage their own behaviour and reactions.

In one of the studies we conducted, we looked at the relationship between father-child rough-and-tumble play and childhood injury rates in 46 families.

Tackling dad, three on one!

What we found was the more dads engaged in rough-and-tumble play with their kids, the fewer injuries those kids sustained.

We think the rough-and-tumble play is teaching kids about their limits – how far they can physically push themselves.

One of the important lessons from any rough-and-tumble play, though, is about the balance between winning and losing. It’s important parents don’t dominate.

One of my favourite rough-and-tumble games is the sock wrestle. Each player puts on just one sock. The aim of the game is to get your opponent’s sock off their foot. Give it a try. It’s simple, but a lot of fun!

Give me that sock!

When you’re playing this with your kid (or kids if you want an extra challenge!), make sure you share the winning and losing.

It’s important for your child to both win and lose, as without the losing and the frustration that comes with that, you’re not helping to teach them how to regulate their emotions.

So it seems as though the rough-and-tumble play with kids isn’t just enjoyable, it’s also an important part of a child’s development.

It’s teaching children how to regulate their emotions, how to safely push and extend their limits, how to assess risky situations, and how to get along well with others.

Not only that, but physical activity has multiple health benefits too. Rough-and-tumble play is the sort of thing we should be encouraging parents to do regularly.