Next year, both NASA and the European Space Agency (ESA) will send new rovers to Mars to hunt for evidence of past life.

As previous missions have discovered, Mars had a warmer and wetter past, featuring conditions that could probably sustain life. Current satellites orbiting Mars also reveal there are many places where water was once present on the surface.

The difficulty in hunting for life lies not in finding where there was water, but in identifying where the essential nutrients for life coincided with water.

For life to move into a new environment and survive, it needs essential nutrients such as carbon, hydrogen, nitrogen, oxygen, phosphorus, and sulfur (together known as CHNOPS), plus other trace elements. It also needs to acquire energy from the environment. Some of Earth’s earliest life forms gained energy by oxidising minerals.

Mars’s crust is mostly made of intrusive and volcanic basalt (the same rock that forms from Hawaii’s lavas) which is not particularly nutrient-rich. However, meteorites and micrometeorites are known to continuously provide essential nutrients to the surfaces of planets.

Read more: Hope springs: signs of life could be waiting for us on Mars

Our team investigated how much cosmic dust (comet and asteroid dust) would survive atmospheric entry to Mars, and where it would accumulate on the surface as micrometeorites.

We modelled the heating and oxidation effects of atmospheric entry to Mars and found most particles less than about 0.1-0.2mm in diameter would not melt, depending on their composition. In terms of materials accumulating on the martian surface, particles of this size are overwhelmingly more common than larger particles.

On Earth, about 100 times as much cosmic dust in this size range accumulates on the surface, when compared to meteorites larger than 4mm. This is despite extensive melting and evaporation during atmospheric entry to Earth.

As part of our research, we used an analogue site on the Nullarbor Plain in South Australia (which, like Mars, has wind-modified sediment sitting on cracked bedrock) to examine whether wind causes micrometeorites to accumulate at predictable locations.

We found more than 1,600 micrometeorites from a variety of sample sites. 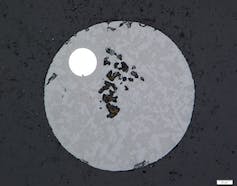 Microscope image of a sectioned micrometeorite from the Nullarbor Plain, Australia. The bright sphere is iron-nickel metal, the grey minerals are iron oxides. Angus Rogers

Our observations show that because many micrometeorites are denser than normal sand grains, they are likely to accumulate in bedrock cracks and on gravel-rich surfaces where lighter particles have been blown away. Our samples typically contained several hundred micrometeorites per kilogram.

Several factors added together indicate that micrometeorites should be much more abundant on Mars than on Earth. And this is expected to be true for most of Mars’s 4.5-billion-year history.

Unmelted and partially melted micrometeorites supply complex carbon compounds to the martian surface, which are the building blocks of life. They also supply the only source of reduced phosphorus through the mineral schreibersite, which has been shown to react with simple hydroxyl compounds to form the precursors for life.

Micrometeorites also provide other reduced minerals like sulfides and iron-nickel metal that can be exploited as an energy source by primitive microbes. Therefore, they provide both the essential nutrients and an energy source that can allow existing microbes to migrate and persist.

Many scientists believe life on Earth may have started around undersea geothermal vents or in volcanic hot springs like those at Yellowstone or Rotorua. Beneath these, water circulates through the hot crust, dissolving nutrients from the rocks and carrying them upwards to the vents, where there are dramatic changes in temperature and chemistry.

Read more: Evidence of ancient life in hot springs on Earth could point to fossil life on Mars

This creates a large range of niche environments, some of which have the ideal combination of water, temperate conditions and chemistry for life.

The expired Spirit rover found evidence of an extinct volcanic spring on Mars and more have been inferred from orbital observations. These volcanic springs were considered as a landing site for NASA’s Mars 2020 rover, but in the end Jezero Crater was chosen.

Jezero Crater has a combination of water-produced channels in a delta system that contains clay and carbonate minerals in sedimentary rocks. These are ideal for preserving geochemical signs of life. Similarly, Oxia Planum has been chosen as the landing site for ESA’s ExoMars rover, which also contains clays in sedimentary deposits.

While neither Jezero Crater or Oxia Planum contain known volcanic springs, they are still water-rich environments where life may have existed on Mars.

Micrometeorites provide the nutrients that may have allowed life to migrate into and persist at these locations, and could even provide the ingredients for life to emerge away from Mars’s volcanic springs.

With plans in the works for 2020, we may soon be on the cusp of one of the greatest scientific breakthroughs of all time.