A giant kangaroo that roamed Australia during the Ice Age had a far mightier bite than its modern-day cousins, according to new research which suggests this species could eat a tough, woody diet similar to that of a giant panda.

The extinct short-faced kangaroos, known as sthenurines, were very different to kangaroos of today. They had thick-set bodies, long muscular arms, often only a single large toe on each foot, and box-shaped heads rather like a koala’s.

Some of these species had massive skulls, with enormous cheek bones and wide foreheads. All this bone would have taken a lot of energy to produce and maintain, and it likely wouldn’t have evolved unless it was needed to accommodate very strong biting forces. This in turn suggests these kangaroos probably included very hard food as part of their diet, just as bamboo-chomping pandas do today.

To find out just how well these kangaroos could bite, I analysed a skull from one particular sthenurine kangaroo species, Simosthenurus occidentalis, for which we have good-quality fossils.

S. occidentalis was huge, weighing around 120kg, and went extinct an estimated 42,000 years ago.

I used computed-tomography (CT) scans of its skull to create a three-dimensional computer model. This then allowed me to simulate various bites and estimate the strength and distribution of forces across its skull during such actions.

According to my measurements, this kangaroo had a very mechanically efficient bite. This means more muscle force could be translated into bite force, allowing it to achieve harder bites with less effort. 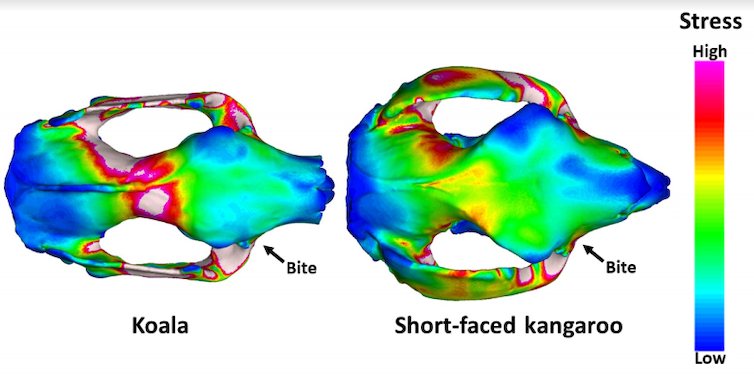 Short-faced kangaroos could put a lot of force through their teeth without stressing their skull. D. Rex Mitchell/PLOS, Author provided

For crushing hard foods, this was largely achieved with the help of broad rows of large molars that extended far back along the jaw. But I also found there was a risk of jaw dislocation when biting at the rear teeth, because they are very close to the jaw joints.

However, I found evidence of an enlarged muscle positioned inside the kangaroo’s immense cheek bones. My simulations demonstrated this would reduce the risk of jaw dislocation, thus allowing this kangaroo to bite very hard with greater confidence.

It’s perhaps no coincidence this muscle is also enlarged in the giant panda, which feeds on tough bamboo and therefore also needs a powerful bite.

I also found the skull of S. occidentalis was very resistant to twisting when biting hard on one side of the mouth. This suggests this kangaroo may have crushed very thick vegetation by putting it directly into its premolars, rather than biting at the front. Watch a giant panda eating bamboo and you’ll see it does exactly the same thing. 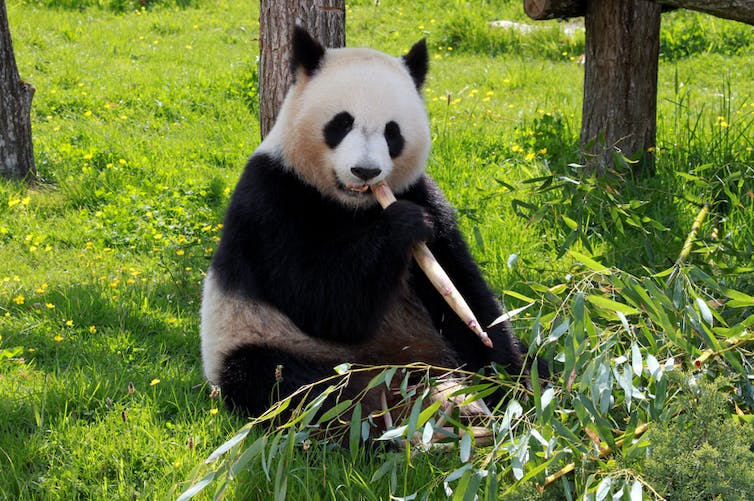 Side dish: giant pandas bite with their back teeth. Author provided

Modern kangaroos have grazing diets based mainly on grasses. Other marsupial herbivores, such as tree-kangaroos and koalas, have browsing-based diets featuring small twigs and leaves from trees and shrubs. But no browsing marsupials today have the jaw power to eat whole branches.

My findings suggest short-faced kangaroos were therefore able to feed on parts of trees and shrubs that other herbivores of the time couldn’t eat. This would have given these powerful kangaroos a competitive edge during drought or other times of stress.

Given S. occidentalis was living in Australia until relatively recently in evolutionary terms, both climate-induced and human-induced factors potentially played roles in the eventual extinction of this species. But one thing is for sure: regardless of how they died off in the end, they were crushing it while they lived.