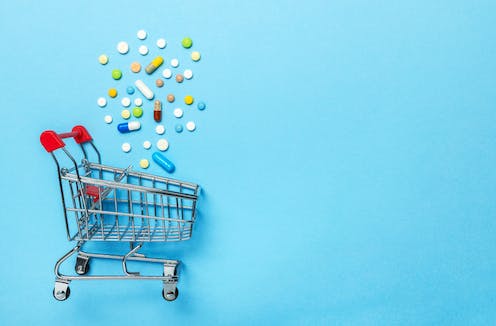 Supermarket pharmacies have been around in the US, UK and mainland Europe for years. But will Australia follow?from www.shutterstock.com

On the way home, you wander into the supermarket for a loaf of bread. But before you reach the bread aisle, you drop in your prescription at the supermarket pharmacy. Shopping done, you pick up your pills on the...

On the way home, you wander into the supermarket for a loaf of bread. But before you reach the bread aisle, you drop in your prescription at the supermarket pharmacy. Shopping done, you pick up your pills on the way out.

Across the US, UK and mainland Europe, supermarket pharmacies are becoming the norm. But in Australia, they’re banned.

The Commonwealth government is negotiating the seventh Community Pharmacy Agreement with pharmacists, which outlines how community pharmacy is delivered over the next five years, who delivers it and where.

So could pharmacies in supermarkets be an option for Australia?

Read more: Explainer: what is the Community Pharmacy Agreement?

How common are they?

Overseas, pharmacies have been in supermarkets for decades. In the UK, supermarkets like ASDA, Tesco, Morrisons and Sainsbury’s have them. And so do Walmart, Kroger and Publix in the US.

The Guild also suggests it would be hypocritical for supermarkets to run pharmacies when they rely on cigarette and alcohol sales.

Overseas, there is public support for small, independently run community pharmacies over supermarket-owned ones.

For instance, in 2013 almost 2,000 people petitioned against supermarket giant Tesco, fearing an existing pharmacy across the road would be “bulldozed” out of business.

The main arguments for pharmacies in supermarkets seem to be they would offer the public a cheaper and more convenient service.

For instance, Walmart employs more than 10,000 pharmacists across 3,000 retail pharmacies throughout the US and launched a 24 hour pharmacy service over a decade ago. Then it began dispensing generic medications for as little as US$4.

Read more: Is pharmacy the final frontier for supermarkets?

If Australia follows international trends, we might consider two models: 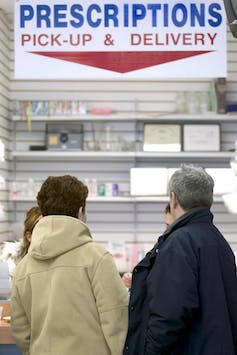 In-store pharmacies might be convenient, but is that enough to convince policy makers they’re right for Australia? from www.shutterstock.com

Examples of straight-out ownership include Sainsbury’s in the UK and Walmart in the US. This arrangement allows them to sell these assets at a later stage.

This is what happened with Sainsbury’s, which sold its 281-store pharmacy business to Celesio, the owner of the Lloyds Pharmacy chain, for £125m in 2015. Sainsbury’s indicated the move would enable further growth, while extending their pharmacy services to customers.

In an example of a strategic alliance, UK pharmacy chain Boots and supermarket Waitrose agreed in 2009 to stock each other’s products.

Read more: Why Australian supermarkets continue to look to the UK for leadership

However, existing legislation prevents either option in Australia unless changes are made in the new Community Pharmacy Agreement. This is because current pharmacy ownership rules prevent supermarkets or anyone (other than a pharmacist) from owning a pharmacy.

If ownership rules were lifted, but location rules remained, supermarkets would be prevented from operating pharmacies opening within 1.5km of one another.

This means if Coles had an in-store pharmacy, then Woolworths across the road, could not operate one, and vice versa. And if there was already a pharmacy in the neighbourhood, neither could open one, even if ownership rules were relaxed.

Are we set for regulation or liberalisation?

However, pharmacy giant Chemist Warehouse and Ramsay Health Care (which owns pharmacies as well as private hospitals), say ownership rules are redundant and ineffective. And they’re not alone.

And in 2015 the Harper Report into competition policy recommended:

[…] pharmacy ownership and location rules should be removed in the long-term interests of consumers. They should be replaced with regulations to ensure access to medicines and quality of advice regarding their use that do not unduly restrict competition.

European countries seem to be moving towards deregulation. In 2017 Italy passed legislation to allow corporate entities to own a pharmacy business, and also increased the number of pharmacies a proprietor may own. 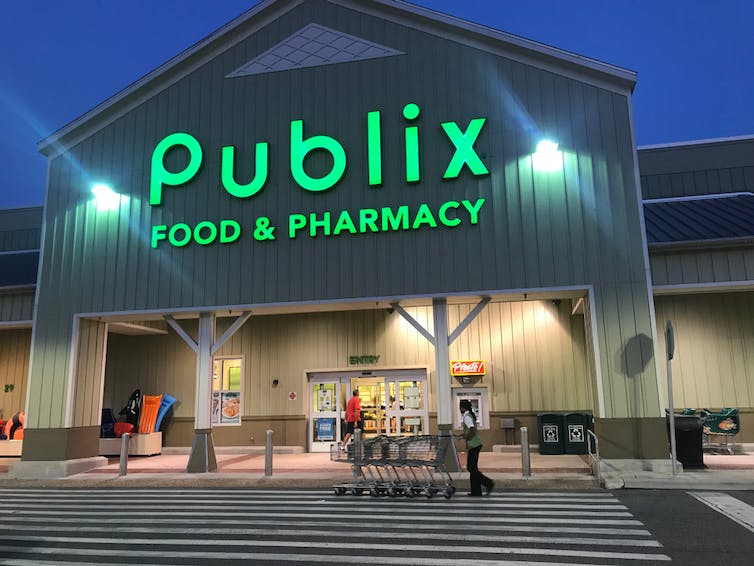 In the US, in-store pharmacies in supermarkets are common, convenient and can offer cheaper products. But current Australian pharmacy ownership rules ban them. from www.shutterstock.com

So what are the impacts of deregulation? If we look at evidence from Europe, when the UK relaxed ownership and location rules, pharmacies operated more efficiently. Pharmacies also had more freedom to set prices for over-the-counter products and offered a wider range of services.

Yet, the same research also found where there was stronger regulation, such as in Spain, consumer access to pharmacy improved, as new pharmacies were opened based on geographic, demographic or needs-based criteria. Simply, if there was already one pharmacy servicing a neighbourhood, they didn’t need another.

Whether Australia is likely to see supermarket pharmacies any time soon is open to debate.

In a speech to the Pharmacy Guild’s national conference in 2019, federal health minister Greg Hunt said there would be no change to the ban on locating pharmacies within supermarkets.

However, other powerful groups are calling for change. These include the Australian Medical Association, which wants the regulations changed to allow broader ownership of pharmacy businesses.

If supermarkets were to guarantee sufficient controls — such as to ensure the safe use of medicines, staff were properly trained and there were safeguards to ensure equitable access for elderly patients, Aboriginal and Torres Strait Islander people, particularly people living in rural and remote areas — it would be hard to argue for existing rules about pharmacy ownership and location.