Paddy Manning’s excellent account of the Australian Greens will not be the last word on Australia’s most successful third party, but will doubtless remain important and influential for many years to come.

Manning’s exhaustive (but never exhausting) Inside the Greens pulls the reader through almost half a century of battles over development that threatened the natural world. It spans Tasmania’s Lake Pedder battle in the 1970s to this year’s Galilee blockade over future coal extraction, including the proposed Adani mine – all while explaining the tensions between pragmatists and idealists.

Read more: Greens on track for stability, rather than growth, this election

Inside the Greens should be read not just by those particularly interested in the issues, and the political tragics who buy all these sorts of books, but by anyone who feels the need to combat what veteran political journalist Laura Tingle calls “political amnesia”. 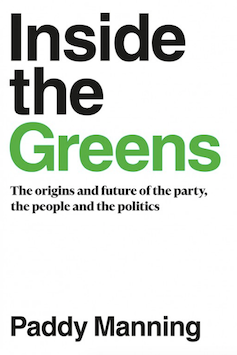 Black Inc. Manning has been working on this book for several years and some portions of the work have appeared in The Guardian and the Sydney Morning Herald. He has excellent access to archives and activists, and has interviewed extensively – including Bob Brown, Christine Milne and Richard Di Natale – and referenced sources such as writer Amanda Lohrey’s Quarterly Essay Groundswell and journalist Paul Kelly’s book Triumph and Demise. Manning refers less to the broader academic literature, such as Tim Doyle’s Green Power and Hutton and Connors’ History of the Australian Environment Movement. Manning is not the only writer to tackle the Greens of late. In the same way Shaun Crowe, author of Whitlam’s Children (astutely reviewed in Overland) was clear where his sympathies lay, so is Manning. However Manning has not traded his critical faculties for access. While his sympathies are clear, both about the Greens party itself and within its ranks, you trust him not to soft-pedal. For example, he is perfectly happy to call out bad behaviour. Discussing the furore around Alex Bhathal, a perennial Greens candidate in Victoria, Manning says: On a blunt assessment, Bhathal was a high-profile victim of a long-running feud between two Melbourne branches, the Darebin and Moreland Greens. Hardly anyone knows whence it started, or what it’s about. The main strengths of the book are that Manning resists the temptation to merely handwave at the 1970s and ‘80s before diving into the gory (and much told) dilemmas of the Rudd-Gillard years (anyone looking for new juicy gossip about that period will be disappointed). Nor does he descend into blow-by-blow accounts of the tensions within the New South Wales Greens, and between the NSW and federal parties. Inevitably in a book of this length and detail (and given that it was only completed after the recent federal election), some ambiguities and errors have slipped through. Among the more obvious, the 20% greenhouse emissions reduction target was propounded by Bob Hawke’s government, not John Howard’s, and Australia did in fact sign the Kyoto Protocol (in April 1998), but only ratified it in November 2007 under Kevin Rudd. Far less importantly, Ben Oquist was not executive director of The Australia Institute in 2014 when the bizarre Palmer-Gore deal saved the Clean Energy Finance Corporation and ARENA – Richard Denniss was (I know, I know, I should get out more). The first 11 chapters give a chronological account of the political pushes for sustainability in the 1960s and '70s (without perhaps giving enough attention to pro-conservation Liberals and Labour at the time, or the tensions within the Australian Conservation Foundation) all the way through to the recent wars within the NSW Greens and the 2019 election. The second, shorter half of the book is perhaps not quite as strong. Manning gives a serviceable account of the climate emergency, before an examination of tackling inequality in the “aspirational era”. A better chapter takes on the Greens’ defence and military policies - he approvingly quotes, but doesn’t cite, the defence expert Alan Carris. Manning finally talks about the challenges ahead for the Greens. Herein lies the book’s greatest shortcoming. On page 398 Manning had already quoted Jonathan Moylan (he of a fake press release that temporarily wiped A$314 million from a coal company’s market value) saying “what we need is a movement powerful enough that it can’t be ignored by any politician”. Read more: The Australian Greens at 25: fighting the same battles but still no breakthrough Indeed. And that is the great, largely unexamined, and seemingly unacknowledged failure of the green left, both inside and outside parliament. In the same way Denniss did a very good job of elucidating the problem with affluenza, Manning has diagnosed the problems for the capital G and lower-case greens without necessarily putting forward concrete or specific curatives. But nonetheless, this book deserves a very wide readership. Inside the Greens is published by Black Inc.