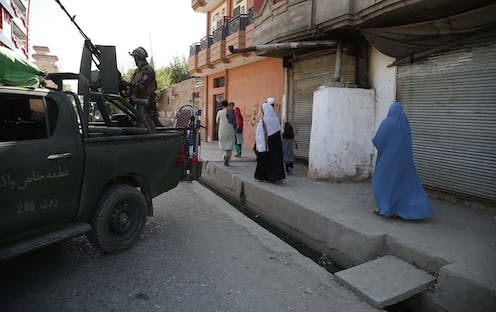 After nearly two decades of fighting, the death toll in the war in Afghanistan is staggering. Apart from more than 45,000 Afghani soldiers killed since 2014 and 3,576 western coalition soldiers since the beginning of the conflict in 2001, some 32,532 civilians were killed in Afghanistan between 2009 and 2018 – most of them by anti-government forces.

In a small subset in this human tragedy, New Zealand is critically examining one particular operation, during which six people were killed, including a three-year-old girl. This occurred when a Taliban group was targeted by a New Zealand lead force, allegedly in reply to an attack on a New Zealand team in early August 2010.

In their book, Hit and Run, journalists Nicky Hager and Jon Stephenson called into question the official version of events of this action, known as Operation Burnham.

This questioning has resulted in an official inquiry, to see if there was wrongdoing on the part of New Zealand Defence Force personnel or whether New Zealand troops committed war crimes.

With such high stakes at play, it is necessary to have a basic understanding of the rules of international humanitarian law that govern such military operations. The core of this area (the Geneva Conventions) were concluded after the Second World War and then supplemented in 1977, with two protocols to deal with both international and non-international conflicts. New Zealand is a signatory to all of these rules.

Humanitarian law grants civilians much greater protection in times of international conflicts (Protocol I). But even with these higher standards, the rule is clear that the presence of civilians in a particular area does not render that place immune to military operations. This is especially so if the civilians are trying to shield legitimate military targets from attacks.

International humanitarian law grants civilians lesser protection in times of non-international (typically civil war) conflicts (Protocol II). This protocol mandates that civilians shall enjoy only a general protection against the dangers arising from military operations. While acts of violence with the primary purpose of spreading terror among the civilian population are prohibited, there is much more grey in what can be done in the war zone.

The law covering Afghanistan is Protocol II. New Zealand, along with our NATO allies, have been trying to help the Afghanistan government in their war against a number of insurgent groups, of which the Taliban are dominant.

New Zealand military law tends to conflate the two protocols. But in terms of crimes of international significance, it is the wording of the protocols that matters at the global level, not the New Zealand practice.

The first thing to note is that all attacks against the opposing force must have a direct military advantage anticipated and focus on legitimate military objectives. Such objectives may be enemy combatants or places. This includes places occupied or defended by fighters of the opposing force or places they store their weapons.

On this point, video footage has shown some armed insurgents in close vicinity of one of the targets. In addition, two insurgent commanders hunted by the New Zealand SAS have subsequently admitted they were present in a village raided during Operation Burnham. In short, this appears to show that the planned operation was a legitimate goal.

Even if the goal is legitimate, there are still strong restraints around the methods by which an attack can take place. It is in this area, that the real work of the inquiry will be most difficult.

New Zealand standards prohibit direct attacks against civilians, especially if the attack would result in collateral civilian casualties clearly disproportionate to the expected military advantage. In plain language this means that just because a military target has civilians around it, their prima facie immunity does not stop the attack but there are limits to the type of attack that can occur.

Specifically, any attacks must be discriminate in focus and proportionate in impact, striking a balance between military necessity and humanity. For example, “free fire zones” (in which any person encountered is presumed to be enemy) or indirect fire missions (fired into an area at random without regard to who may be there) and single target areas (that combine both military and civilian considerations), are all prohibited.

Despite the importance of trying to create a clear line of distinction between civilians who should be immune, and enemy fighters who can be targets, the key is that anyone taking a direct part in hostilities does not have civilian immunity. In an ideal world, the enemy is easy to identify, distinguished by factors such as uniforms.

But war in Afghanistan is not an ideal world. As the enemy hides among civilians, the commander of conventional forces has to balance the risks of exposing their soldiers to heavy casualties to a disguised enemy, or innocent civilians paying a price, because the enemy draws fire upon them.

Sometimes, it is relatively easy to identify the non-uniformed enemy as a legitimate target as they are involved in actions of a fundamentally military nature intended to cause death or damage. Even if someone is not carrying a weapon, they may become a legitimate target if they have a “continuous function” that amounts to direct participation, such as membership of any enemy armed group.

Whether someone is taking a direct part can also depend on how they are behaving, the clothes they are wearing, their gender and age, the extent to which they are equipped for combat, and the way they react to the presence of the New Zealand force, and their history with the enemy armed group. Similarly, a civilian who acts as a voluntary human shield to block a legitimate military target, also loses their immunity.

Read more: Afghanistan: as Taliban and US near peace deal, it's far too soon to commit to returning refugees

The principle of humanity

Where there is no doubt, and people must not be attacked, is when they are only indirectly participating in the conflict. Provision of general support and comfort to opposing forces, such as food and shelter or financial resources, does not amount to direct participation. Similarly, accompaniment with an armed enemy group does not mean a continuous combat function, nor does affiliation through family or community linkages. Refusing to help conventional forces, such as failing to provide information when asked, theft or even disobedience, do not justify lethal force to be used against these civilians as they, also, are not taking a direct part in the hostilities.

If there are reasonable questions as to whether a person is taking a direct part in hostilities, the person is to be given the benefit of doubt. They are presumed to have civilian immunity. In such situations, all feasible alternatives to lethal force should be explored. The principle of humanity demands this.