US House Speaker Nancy Pelosi has announced the Democrats have begun a formal impeachment inquiry into President Donald Trump over allegations he tried to pressure the Ukrainian president to investigate a Democratic political rival.

And now the transcript of the phone call has been released, Democrats have said the evidence was even more incriminating than they expected.

According to the transcript Trump said:

There’s a lot of talk about Biden’s son, that Biden stopped the prosecution and a lot of people want to find out about that, so whatever you can do with the attorney general would be great.

Biden went around bragging that he stopped the prosecution so if you can look into it […] It sounds horrible to me.

Impeaching Trump is still fraught with risk for the Democrats. Taking down a sitting president is the equivalent of the nuclear option in American politics.

Alexander Hamilton weighed the gravity and means of impeachment in his Federalist papers (no. 65-66) of 1787-88.

A well-constituted court for the trial of impeachments is an object not more to be desired than difficult to be obtained in a government wholly elective.

Whether successful or not – and most impeachments are not – the fallout will be deep and enduring. The impediments, even if Trump did commit a high crime in his diplomatic dealings with Ukraine, are considerable.

Here are eight risks for the Democrats: 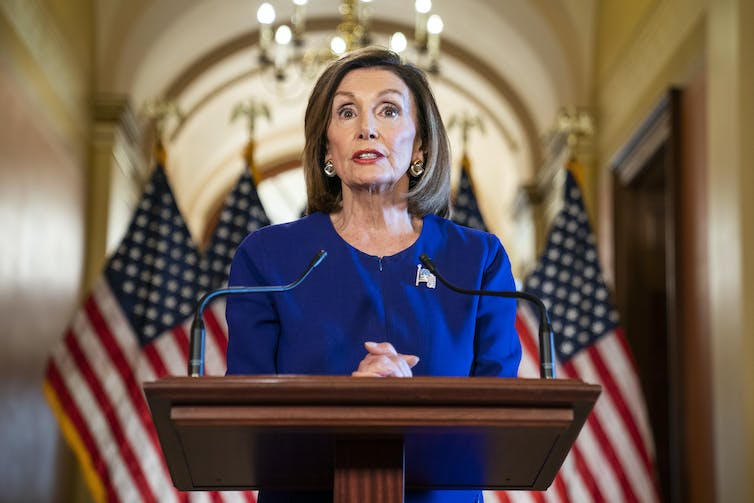 Before we get into the details of Trump’s alleged crime, ponder how likely it is impeachment would fail – even if his misdeeds are true.

But there are not enough Democrats in the Senate to find him guilty there. Two-thirds of the 100 senators (or 67, what is known as a “super majority”) would have to vote guilty to remove him from office – and only 46 are Democrats.

Even allowing for some Republicans joining them, Trump is likely to have the maths on his side.

The biggest challenge facing Democrats is whether Hamilton’s vision of a judicially impartial Senate is capable of acting without regard to partisan advantage. There is little in either the contemporary context or in American history to suggest that it can.

Trump commits so many small transgressions that no big one ever sticks to him. He has become adept at dodging criminal charges and simultaneously claiming they are part of a Democratic witch-hunt.

The huge investment of time and energy that was the Mueller investigation failed to turn up a crime that Pelosi was confident would pass constitutional muster.

The Ukrainian episode may indeed mark a tipping point, but no former transgression has thus far led to impeachment.

3) This is not (yet) an obviously impeachable offence

This is what constitutes an impeachable offence, according to the US Constitution:

The President, Vice President and all civil Officers of the United States, shall be removed from Office on Impeachment for, and Conviction of, Treason, Bribery, or other high Crimes and Misdemeanors (Article II, section 4).

Trump’s lawyers will challenge every effort to paint his “diplomacy” with Ukraine’s leader as reaching the threshold of “high crimes and misdemeanors”.

4) It will remake Trump

If the Democrats’ impeachment effort leads to an acquittal in the Senate, the outcome for Pelosi’s party won’t be a weakened president but, most perversely, an emboldened one.

When the Republicans impeached President Bill Clinton in 1998, he was subsequently found not guilty in the Senate. His last two years in office, despite the shame of the Monica Lewinsky scandal, were among his most impressive.

He liberated Kosovo from the Serbs and took credit for an economic boom. He left office one of the most popular presidents in US history. Impeachment became his foil. It would also be for Trump. 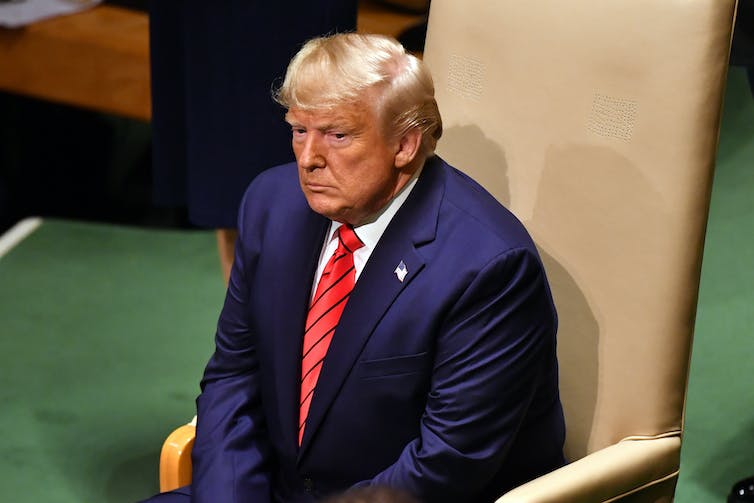 The United Kingdom is presently convulsed because, fundamentally, the democratic will of a majority of voters is being denied by a political establishment that did not like how they voted.

The transposition of this to the US is not hard to imagine: if the Washington political elite successfully removes from office a legitimately elected US president, it will catalyse an already polarised nation into something approaching cultural war.

Democrats will be better served by working out how to beat him at the ballot box in 2020.

If he leaves office by this normal route, his supporters will not be able to posture that he was removed by politico-judicial means but by the ordinary processes of constitutional democracy.

Read more: In the Democrats' bitter race to find a candidate to beat Trump, might Elizabeth Warren hold the key?

6) Democrats need to get their own electoral strategy in order

Instead of waging an impeachment battle, the Democrats should address the issues that gave rise to Trump in the first place.

He is a symptom, not the cause, of a cultural disaffection of mostly white, blue-collar Americans who have felt themselves abandoned by the Democrats. Impeachment compounds that elision. Trump will powerfully claim his persecution is proof the Democratic Party has lost its bearings and is no longer be relevant to these blue-collar voters.

7) Impeachment is not popular

There is not yet a strong consensus in the country that impeachment is the right thing to do. This may change now Americans have been presented with the transcript of what Trump’s Ukrainian machinations consisted of.

But until Congress is sure such a national consensus exists, it needs to keep its powder dry.

He prospers by the enemies he can goad. And he will continue to enjoy the benefits of the US presidency even as the impeachment net closes around him. He will set the agenda and play the victim. He is a master at this.

Democrats, even armed with morality and law, may find themselves not up to this task.

Impeachment is what Trump wants the Democrats to do. It will provide his often chaotic and inchoate administration with a focus and purpose.

And here are three reasons why the Democrats should pursue impeachment.

1) It is the right thing to do morally

In the phone call, Trump seemed to blur a line between the national interest and his own electoral advantage. Asking a foreign leader for dirt on his political rival might be deserving of censure and possibly impeachment.

2) And legally, the rule of law demands it

Elijah Cummings, the chairman of the House Oversight Committee, made this point back in April:

Even if we did not win, possibly, if there were not impeachment, I think history would smile upon us for standing up for the Constitution.

Even if Trump is not removed by impeachment, the process will mire Trump for the rest of his term. He will not be able to pursue policies Democrats have long regarded as anathema.

As an electoral strategy, therefore, impeachment may be of some benefit for Democrats. By November 2020, voters may be so tired of the whole affair they will vote for a change – and carry some Republicans with them.

It will also energise the Democratic base and give it and their leaders a focus so they can avoid wounding each other.

But this is a war-of-attrition approach. It will leave many battlefield casualties and the reputation of Washington will sink even lower.