If you watched China’s impressive military parade marking the 70th anniversary of Communist Party rule, you may be wondering how China now compares to the United States in terms of military might.

The answer: it’s a lot closer than commonly thought.

Read more: The history of the People's Republic of China – through 70 years of mass parades

China’s annual military budget is estimated by the Stockholm International Peace Research Institute to be about 1.7 trillion yuan. This is about 1.9% of China’s GDP.

Using market exchange rates, China’s annual military spending converts to about US$228 billion. By comparison, the US military budget is US$649 billion – or 3.2% of US GDP.

Hence China’s military budget is usually thought of about 40% that of the US – which is often characterised as spending more on its military than the next 10 countries combined.

Such an approach, however, dramatically overstates US military capacity – and understates China’s. In real terms, China’s spending is worth abougt 75% that of the US. 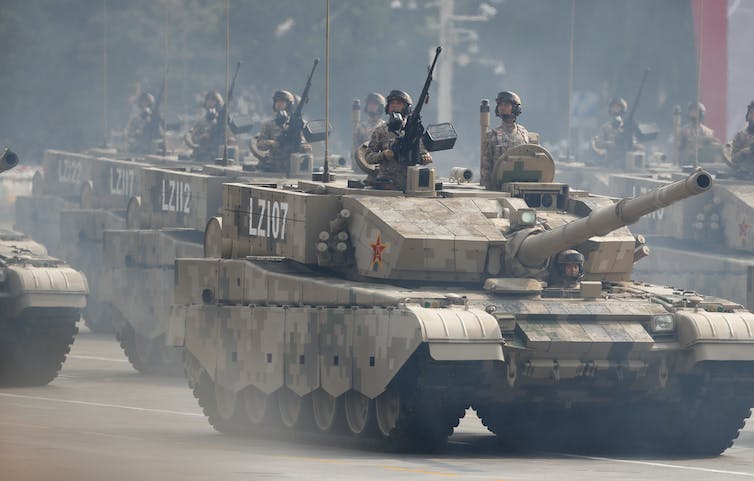 Chinese tank crews in the military parade marking the 70th anniversary of the founding of the People’s Republic of China. Roman Pilipey/EPA

The problem is that a simple currency conversion doesn’t reflect actual price differences across countries. An American or Australian visiting India or China, for example, finds things like street food, nannies and domestic help are all very cheap. The same principle applies to military spending.

The salary of a US soldier might be, say, $US60,000 a year. This could pay the salaries of several, if not many more, soldiers in the People’s Liberation Army.

To make a more accurate comparison of the real purchasing power of a country’s military spending, we need to factor in differences in labour and operational costs between countries. 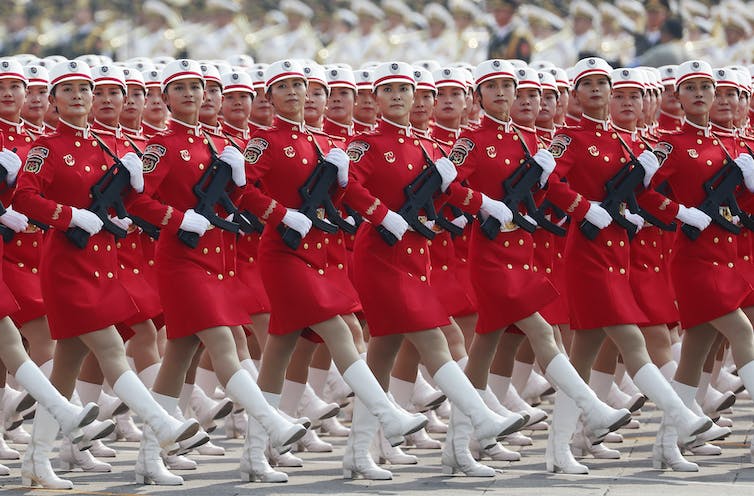 An all-women contingent of the military parade marking the 70th anniversary of the founding of the People’s Republic of China. Wu Hong/EPA

I’ve computed the costs of defence services across countries, looking at personnel, operations and equipment costs.

For some components of military spending, such as the cost of buying a fighter plane or warship, it’s appropriate to use market exchange rates to compare across countries. For other components, particularly personnel expenditure, it’s better to compare wage costs for similarly trained personnel. These costs differences can then be used to construct “purchasing power parity” exchange rates specific to the defence sector. 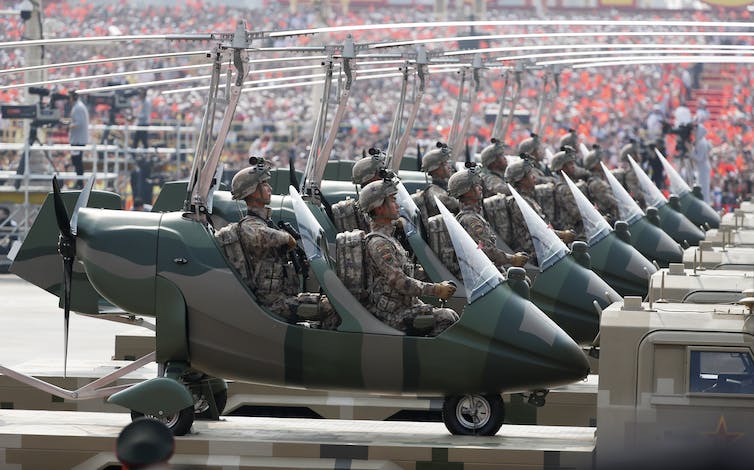 Aerial surveillance crews in the military parade marking the 70th anniversary of the founding of the People’s Republic of China. Roman Pilipey/EPA

Using these rates allows us to see how much the spending in each country actually buys – allowing for price differences between countries as well as how defence planners might react to these different prices given their defence priorities.

Looking at these differences, my analysis suggests China’s military spending is equivalent to the US spending about $US455 billion.

This is nearly double what is suggested by the figure obtained using a straight currency conversion. It means, in real terms, China’s annual spending is about 74% of the US.

Similar results hold for other countries where labour and services prices are comparatively low.

For example, official exchange rate estimates suggest military spending by Russia and India is just 10% of the US. But factoring in the lower prices facing their defence sectors suggests Russia’s military budget is equivalent to about 30% of the US budget; and India’s about 40%.

This analysis also changes the impression we have of countries like Indonesia, Ukraine and Colombia.

For example, Indonesia’s military budget in 2018 equates to a “mere” $US8 billion. But in terms of the actual resources it can purchase, a more accurate estimate is that its expenditure is worth about $US36 billion – substantially more than Australia’s military budget.

Of course, just because an army costs a lot, or has a lot of personnel, doesn’t mean it is good value. The numbers don’t tell us everything we might want to know about relative military power. But they do give a very different, and more accurate, picture of the global distribution of military muscle.

So you should have been impressed by the might of China’s military on parade. The US is still number one - but not by as much as you might think.