Last month, scientists uncovered a mineral called Edscottite. Minerals are solid, naturally occurring substances that are not living, such as quartz or haematite. This new mineral was discovered after an examination of the Wedderburn Meteorite, a metallic-looking rock found in Central Victoria back in 1951.

Edscottite is made of iron and carbon, and was likely formed within the core of another planet. It’s a “true” mineral, meaning one which is naturally occurring and formed by geological processes either on Earth or in outer-space.

But while the Wedderburn Meteorite held the first-known discovery of Edscottite, other new mineral discoveries have been made on Earth, of substances formed as a result of human activities such as mining and mineral processing. These are called anthropogenic minerals.

While true minerals comprise the majority of the approximately 5,200 known minerals, there are about 208 human-made minerals which have been approved as minerals by the International Mineralogical Association.

Some are made on purpose and others are by-products. Either way, the ability to manufacture minerals has vast implications for the future of our rapidly growing population.

Climate change is one of the biggest challenges we face. While governments debate the future of coal-burning power stations, carbon dioxide continues to be released into the atmosphere. We need innovative strategies to capture it.

Actively manufacturing minerals such as nesquehonite is one possible approach. It has applications in building and construction, and making it requires removing carbon dioxide from the atmosphere.

Nesquehonite occurs naturally when magnesian rocks slowly break down. It has been identified at the Paddy’s River mine in the Australian Capital Territory and locations in New South Wales.

But scientists discovered it can also be made by passing carbon dioxide into an alkaline solution and having it react with magnesium chloride or sodium carbonate/bicarbonate.

This is a growing area of research.

Other synthetic minerals such as hydrotalcite are produced when asbestos tailings passively absorb atmospheric carbon dioxide, as discovered by scientists at the Woodsreef asbestos mine in New South Wales.

You could say this is a kind of “modern-day alchemy” which, if taken advantage of, could be an effective way to suck carbon dioxide from the air at a large scale.

Smelting is used to produce a range of commodities such as lead, zinc and copper, by heating ore to high temperatures to produce pure metals. 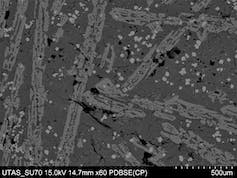 This is a backscattered electron microscope image of historical slag collected from a Rio Tinto mine in Spain. Image collected by Anita Parbhakar-Fox at the University of Tasmania (UTAS)

Once cooled, the textural and mineralogical similarities between lava and slag are crystal-clear.

Micro-scale inspection shows human-made minerals in slag have a unique ability to accommodate metals into their crystal lattice that would not be possible in nature.

This means metal recovery from mine waste (a potential secondary resource) could be an effective way to supplement society’s growing metal demands. The challenge lies in developing processes which are cost effective.

Our increasing knowledge on how to manufacture minerals may also have a major impact on the growing synthetic gem manufacturing industry.

The ring has a 12-carat blue sapphire, surrounded by 14 solitaire diamonds, with a setting made from 18-carat white gold. 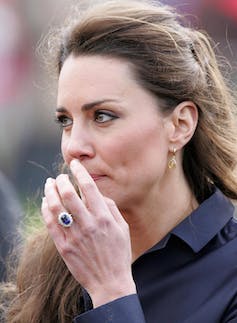 Replicas of it have been acquired by people across the globe, but for only a fraction of the price. How?

In 1837, Marc Antoine Gardin demonstrated that sapphires (mineralogically known as corundum or aluminium oxide) can be replicated by reacting metals with other substances such as chromium or boric acid. This produces a range of seemingly identical coloured stones.

On close examination, some properties may vary such as the presence of flaws and air bubbles and the stone’s hardness. But only a gemologist or gem enthusiast would likely notice this.

Diamonds can also be synthetically made, through either a high pressure, high temperature, or chemical vapour deposition process. 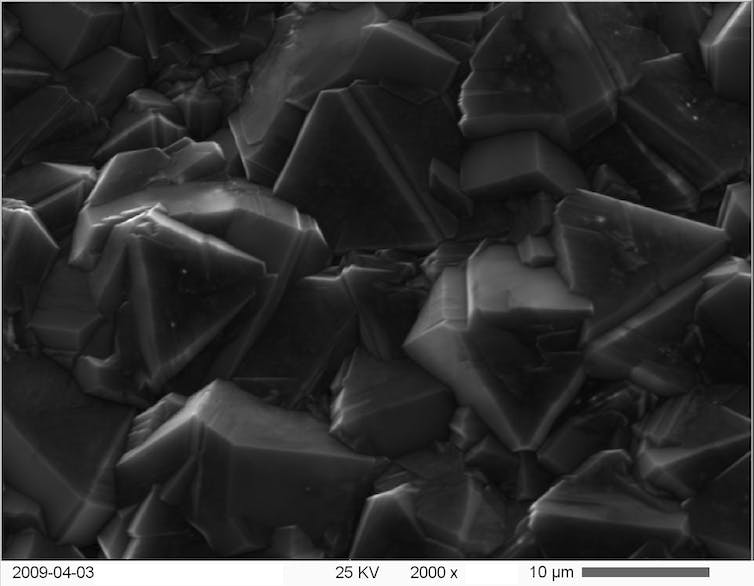 Creating synthetic gems is increasingly important as natural stones are becoming more difficult and expensive to source. In some countries, the rights of miners are also violated and this poses ethical concerns.

Synthetic gems have industrial applications too. They can be used in window manufacturing, semi-conducting circuits and cutting tools.

One example of an entirely manufactured mineral is something called yttrium aluminum garnet (or YAG) which can be used as a laser.

In medicine, these lasers are used to correct glaucoma. In dental surgery, they allow soft gum and tissues to be cut away.

The move to develop new minerals will also support technologies enabling deep space exploration through the creation of ‘quantum materials’.

Quantum materials have unique properties and will help us create a new generation of electronic products, which could have a significant impact on space travel technologies. Maybe this will allow us to one day visit the birthplace of Edscottite?

In decades to come, the number of human-made minerals is set to increase. And as it does, so too does the opportunity to find new uses for them.

By expanding our ability to manufacture minerals, we could reduce pressure on existing resources and find new ways to tackle global challenges.