The Australian society has changed significantly since cemeteries in Victoria were planned and designed 150 years ago. But there haven’t been any major redevelopment or review of the community’s changing requirements for what happens to our bodies when we die.

The Australian population is ageing, with around 15% of Australians aged 65 and over in 2017. About a third of older people in Australia were born overseas, with most coming from a non-English speaking background.

Read more: Buried beneath the trees: a plan to solve our shortage of cemetery space

This has implications for our rituals for death and memorialisation, as well as for existing and future cemeteries.

In a new collaborative research project taken from survey responses and in-depth interviews with members of different communities, we found cemeteries have ongoing significance to Australians, although its meaning and function are changing.

More than half of the 380 survey respondents said they still visit a cemetery once a year or more, and 23% visit once a month or more. But the interview data reveal a more complex and dynamic picture. 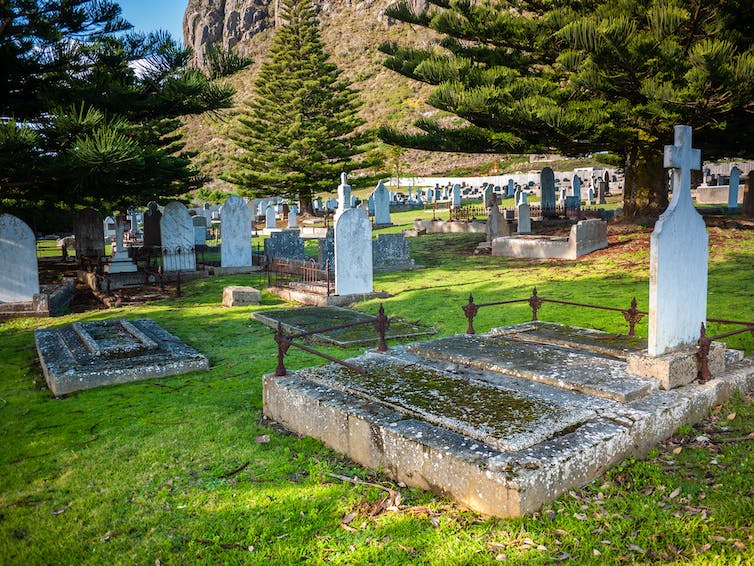 People from CALD communities believed Australia’s cemeteries are greener, better managed and less scary than those in their original countries. Shutterstock

We found people from culturally and linguistically diverse (CALD) communities tend to visit the cemetery more than their Anglo counterparts, and prefered to be memorialised in cemeteries to preserve a sense of belonging.

Anglo-Australians, on the other hand, generally prefer to be cremated and often choose to scatter ashes in places other than a cemetery. In one participant’s case, that meant scattering remains in a French vinyard, an island volcano and their local beach.

The cemetery remains an important site of cultural ritualisation and expression to most CALD interviewees.

Interviewees from the CALD communities - especially those from an Asian cultural background - had positive experiences with cemeteries in Australia. When comparing Australian cemeteries with those in Malaysia, Jenny (60s, Malaysian Chinese) said:

In Malaysia, the cemeteries are not like this […] they are all overgrown […] and we were taught that graves are places where the gangsters will hide out, the thieves will hide out, people will come and rob you, so we don’t go.

The perceptions that Australian cemeteries are more open, greener, better managed, more accessible, and not as scary as those in their original countries made many Asian migrants felt more willing to visit a cemetery here.

Besides the aesthetic contrast, for many CALD interviewees, the cemetery offers a space that embraces their culture and gives them a sense of belonging in Australia.

Tony (30s, Tongan) would love to have a traditional Tongan way of burial in Australia, which involves bone picking (removing the bones from the grave), and grave re-using for future generations. These traditions strengthen their inter-generational connections.

Australian regulations mean these ritual practices are not possible here. But Tony was prepared to make a compromise.

Instead of following the ritual, he insisted on being buried in Australia because his children and family live in Australia. The inter-generational connections can prevail here. They call Australia home.

Read more: Housing the dead: what happens when a city runs out of space?

Participants from the CALD communities generally shared Tony’s idea. They believed having a physical place in Australia (either a grave or a plot for the ashes) gave them a sense of belonging and settlement for themselves and their families.

A library of local history, not a ‘resting place’

On the other hand, people from an Anglo-cultural background no longer see cemeteries as just a space for memorialisation and mourning. From our interviews, many see it as a “library” or a “depository” of the local history and family genealogy.

Cemetery visits, in this sense, contrast between fulfilling one’s cultural duty of memorialisation, and obtaining historical knowledge for self-learning, reflection, and development.

Alfred’s (50s, Anglo-Australian) cemetery visits had been driven by his interest in his family history. Family history can give someone “an explanation” about the kind of person they are, and:

how the attitudes were passed on to the next generation so you can learn a tremendous amount, multi-generation through a family history search.

Yet, while many Anglo interview participants appreciated the historical and cultural values of the cemetery, they became less enthusiastic when considering the cemetery as their “resting places”.

We believe this corresponds with the nationwide trend since 2012 of more Australians preferring cremation to traditional full-body burial.

We found 56% of our survey respondents preferred cremation, 32% indicated preference for a ground burial and 12% were undecided.

In any case, our research indicated many people prefer to be memorialised at a place or site that’s meaningful. This might include their favourite beach or the park where they spent time with their children, rather than in a cemetery, which is outside their social, family spaces.

Read more: During the holidays, giving gifts to the dead can help you cope with grief

Tina (50s, Anglo-Australian) embarked on a global journey to fulfil her late husband’s wishes as he wanted his cremation remains (called cremains) scattered in three locations he loved: a vinyard in Burgundy, France, a volcano in Reunion Island, and the family’s local beach in Williamstown, Melbourne. Tina did all three.

More people have started pre-planning what happens to their body when they die. The quantitative data shows 64% of people have already discussed their end of life-related wishes with close friends or family, and 11% have pre-paid for a funeral service.

In an earlier study, we found Chinese Australians, for example, tended to pre-purchase their funeral services and grave sites before they died.

As previously mentioned, this might enhance their sense of cultural belonging in Australia.

On the other hand, people from an Anglo cultural background would “talk about it”, but few actually “lock things in”.

Interviews from the present study revealed people with an Anglo cultural background had a strong desire of “flexibility”. Many didn’t wish to decide at the time of their interview, as they were still exploring possibilities and opportunities outside the conventional modes of body disposal and memorialisation.

In other words, the idea of being memorialised outside the cemetery was an emerging rather than established idea.

Understanding the contemporary and future funeral needs of the culturally diverse Australian population is important to policy makers, as well as the cemetery and funeral industries.

With increasingly limited access to usable land suitable for burial practices – particularly in metropolitan areas – planning must consider the funeral rites of the ageing population and incoming migrant groups. They are likely to make end of life choices in the coming decades.