The construction and building industries can be dangerous places to work. These jobs not only pose risks to a person’s physical health, but can threaten their mental health, too.

In Australia, “tradies” make up less than one-third of all people in employment, but represent 58% of serious claims for workers’ compensation. Construction ranks in the top three for industries with the highest work-related injury or illness and deaths related to traumatic injury.

While accidents and disease can be put down to the occupational risk of working on construction sites, the disproportionate rates of mental illness seen in this industry cannot. Construction workers are overrepresented in suicide rates in Australia, and this urgently needs to be addressed.

The physically demanding work tradespeople do has long been associated with male toughness and “macho” workplace cultures. But it’s this toxic mentality that’s largely responsible for tradies’ poor mental health.

Read more: Like a 'cancer' of the workplace, bullying is a symptom of dysfunction

The stats on tradies’ mental health and suicide

Research shows workers in construction are at a higher risk of experiencing mental health problems than workers in other professions.

In 2012 in Australia, a total of 169 men working in the construction industry committed suicide.

Why do we have this problem?

Research into Australia’s construction industry indicates workers can be on site for up to double their contracted work time. So long hours, resulting in fatigue and poor work-life balance, are likely affecting tradies’ mental well-being.

Importantly, this research points to strong links between masculine workplace norms and the increased likelihood of mental health issues.

There’s also stigma associated with men talking to others about psychological distress. For this reason, many ignore stress-related mental health problems like panic attacks, anxiety, insomnia and depression, risking the worsening of symptoms. Competition at work may also lead to a breakdown of trust, a lack of collegiality, and conflict.

“Macho” workplaces decrease the likelihood men will look after themselves by consulting health-care professionals, talking to a supervisor about reducing hours or asking for time off. 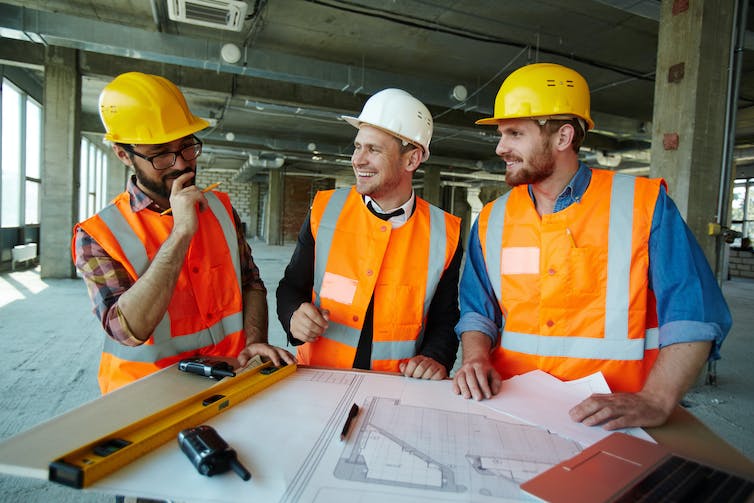 There are programs in Australia which aim to foster better mental health among construction workers. From shutterstock.com

Further, a culture where workers are expected to be tough and self-reliant is exacerbated by the problem of bullying and hazing on work sites. Victims can be left feeling isolated, increasing their risk of burnout, depression and suicidal thoughts.

High profile cases such as the suicide of apprentice Alec Meikle in Bathurst after he was relentlessly bullied have brought this problem to public attention.

The construction industry is highly segregated in terms of gender, with women making up only 1-3% of tradies in Australia and other Western countries.

Our research and other work in the field has looked at the barriers women face to equity and inclusion in the construction and building industries. We’ve identified the “macho” culture as being harmful to women as well as men.

Based on our interviews with tradeswomen and industry stakeholders in New South Wales, it’s clear bullying and harassment are very real issues for both genders.

Some women have been subject to dangerous pranks and left alone on heavy lifting and other jobs that require more than one person. These sorts of risky practices are linked to injury and psychological distress for women as well as men.

The tightening of regulations, and particularly Safe Work Australia’s continued focus on high risk industries, has meant tradies are physically safer on work sites today than they were a decade ago. On site fatalities in Australia declined by 48% between 2007 and 2017.

But much less is known about the extent of deaths from diseases contracted at work. Estimates suggest as many as 2,000 Australians are dying per year as a result of chemicals they were exposed to during their working lives. So this must be an area of focus moving forward.

On the mental health front, alongside awareness campaigns, several groups now exist to provide counselling and facilitate peer support networks within the industry.

A program called “Bluehats” in Victoria aims to challenge the stereotype tough men don’t have emotional or mental health problems. It offers tradies the option to undertake training to become a “bluehat volunteer”, which enables them to provide support to workmates on site. The trained volunteers can be identified by their blue hats.

Entrenched cultures can be hard to shift. There may be resistance to changes, be it procedures to ensure safer work practices, or new coworkers (women or men) who don’t conform to the “macho” stereotype.

But this change is imperative. Maintaining physically and psychologically dangerous behaviours is killing tradespeople at work. As we continue to enact regulations to protect tradies’ physical health, cultural change is essential for the improvement of their mental health, too.