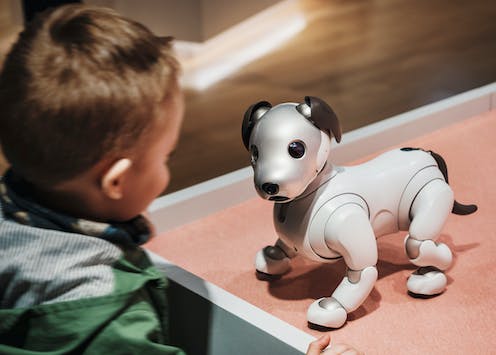 Set in a dystopian 2019, the sci-fi classic Blade Runner explores how artificial humans could impact our humanity. Harrison Ford’s character experiences powerful emotional and moral effects as he goes about hunting “replicants”.

Now, in the real 2019, the influence of robots on human behaviour is increasingly relevant. Killer military robots and sex robots, for example, might alter attitudes to killing and to women, respectively.

In our research, we explored the potential link between social robots and human character.

Could treating social robots kindly make us kinder people? And could cruelty towards them make us more callous?

Social robots are designed for companionship, customer service, health care and education. Many are animal-like. Paro, the furry baby seal who has even starred in The Simpsons, is used in aged care facilities. Paro can learn new names, respond to greetings, and “enjoys” being praised and petted.

Paro the robot seal was featured on The Simpsons.

AIBO is a robot dog that plays, expresses likes and dislikes, and develops a personality. Future robot companions might even be human-animal hybrids or realisations of mythical creatures such as centaurs or dragons.

Some social robots are humanoid, which means they resemble humans. Sophia, modelled on Audrey Hepburn, can recognise faces and hold simple conversations.

It’s hard to predict whether and how robots might change us. Early research in human-computer interaction observed people being polite to computers. More recent research suggests humans may respect a robot’s personal space and trust their judgement.

And there are many examples where robots have pulled at our heartstrings. When Steve, a robot security guard, “drowned” in a Washington fountain, locals created a memorial for it.

This compilation of clips shows various robots being physically “abused”.

Some years ago, a military experiment that crippled a six-legged robot was halted for being inhumane. On another occasion, when instructed by researchers to “torture” Pleo the dinosaur robot, participants frequently refused.

Yet the desire to harm robots is also real. One study found some children would, in the absence of their parents, verbally abuse, kick, and punch a service robot in a shopping mall.

But don’t we mistakenly attribute feelings to robots?

This is possible, but uncertain. After all, we may pity or despise a character in a book, movie, or video game without believing they actually experience anything.

That said, a link between our treatment of robots and our character need not depend on us truly believing robots have feelings.

Read more: We need robots that can improvise, but it's not easy to teach them right from wrong

In a scene from the comedy series The Good Place, Janet the robot begs human characters not to terminate her. When the humans instinctively withdraw in sympathy, Janet comically reminds them that, as an artificial thing, she cannot feel or die. Thus, Janet implies, their reluctance to terminate her is, despite her own pleas for mercy, irrational.

Janet the robot from The Good Place has a strong emotional and moral influence on her fellow human characters.

Imagine a non-talking robot which, when threatened or assaulted, struggles, staggers, tries to flee, and petitions other people for assistance. Such a robot might prompt our pity – or our cruelty – in a way that goes beyond responses to fictional characters.

Sentient animals, which have minimal legal protections, may be especially vulnerable to this effect. But humans may also be at risk.

If social robots could shape our characters in significant ways, it may be young children who are most affected, as childrens’ characters are especially impressionable.

Two sides of the argument

Some experts believe robots could indeed make us crueller. Consider this argument.

Humans tend to subconsciously attribute sentience (feelings) to robots. Our treatment of these robots can then influence our treatment of other living creatures.

If a man is not to stifle his own feelings, he must practice kindness towards animals, for he who is cruel to animals becomes hard also in his dealings with men.

Others are more sceptical. After all, there is no conclusive evidence that enjoying violent movies and video games breeds violence towards others.

Read more: The drive towards ethical AI and responsible robots has begun

Moreover, robots are not sentient and lack feelings. But, while some may argue it’s therefore impossible to be “cruel” or “kind” to them, this isn’t entirely obvious in instances where they can struggle, flee, protect themselves, and ask for assistance.

We should hope social robots encourage kinder actions in humans in general, rather than crueller ones.

Perhaps robot anti-cruelty laws are excessive in a liberal society.

But as robots increasingly become a part of our lives, often making decisions without human control, we have good reason to monitor the influence they have on us.