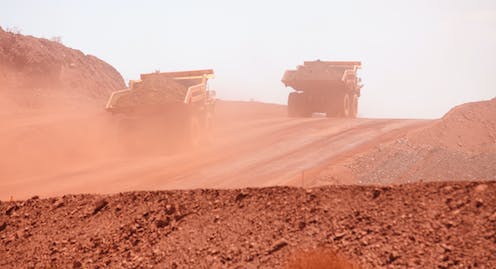 Trucks taking iron ore from mines in Western Australia where it will probably be shipped overseas.Shutterstock/Inc

Australia could create tens of thousands of new jobs and generate many billions of dollars in export revenues if it turned more to manufacturing metals rather than exporting ore to other countries.

Australia could create tens of thousands of new jobs and generate many billions of dollars in export revenues if it turned more to manufacturing metals rather than exporting ore to other countries.

That’s a finding of our report, From Mining to Making, released by the Energy Transition Hub.

As international climate action accelerates, there is a need to produce goods without the carbon emissions. The report describes opportunities for Australia to use its exceptional wind and solar resources to make zero-emissions metals.

The need for metal

Demand for metals is set to grow, not least because of their importance in nearly all renewable energy technologies. Wind turbines are made from steel, copper and rarer metals such as cobalt and neodymium. Solar panels and batteries use metals including silicon, lithium, manganese, nickel and titanium.

As the global economy tries to reduce carbon emissions we must change the way metals are made. Metal production is energy intensive and accounts for around 9% of global greenhouse gas emissions. Herein lies Australia’s opportunity.

Australia is already a major source of the world’s metal. It is among the top three exporters of iron ore, bauxite, lithium, manganese and rare earth metals.

A small proportion of these metals are refined domestically, but most are shipped overseas in their raw mineral form. For example, we found Australia converts less than 1% of its iron ore into steel.

By exporting raw ores, Australia is selling non-renewable resources at the lowest point of the value chain. Processed metal is worth much more than ore.

Many metals are made through electrically-driven processes so we can reduce carbon emissions by switching to cheaper renewable electricity.

One example for this approach is Sun Metals, near Townsville in Queensland. The company built a 125MW solar farm to supply a third of the energy required by its zinc refinery. It is now considering adding wind power and battery storage.

Similar opportunities exist with the production of other metals such as manganese, copper, nickel and rare earths.

Another angle for Australia is to make specialised metal products with higher profit margins. Element 25, in Western Australia, plans to produce high-value manganese metal using an energy-efficient process developed with CSIRO. The company says a 90% renewable energy mix could lower production costs and help it compete with Chinese producers.

Renewable energy could even relieve Australia’s ailing aluminium industry. The owners of three of Australia’s existing aluminium smelters said they were “not sustainable” with current electricity prices. Could cheap wind and solar energy provide a lifeline?

The usual objection is that aluminium smelters need a steady power input, not variable solar and wind energy. But, new technologies enable more flexible operation, allowing smelters to react to market conditions, while relieving pressure on the grid during peaks in demand.

Steel production presents a different kind of problem. It uses so much coal that it accounts for 7% of global emissions. But new steel can be made without coal.

Many steelmakers around the world use an alternative process, called direct reduction, fuelled by natural gas. This technique reduces emissions by about 40% and can be modified to run on pure renewable hydrogen, enabling production of near-zero emissions steel.

At least five companies in Europe are actively pursuing hydrogen-based steel production as part of their efforts to eliminate emissions. So far there are no similar plans in Australia despite this country’s unrivalled wealth of iron ore and renewable resources.

Zero-emissions metals could become a major export industry. Our report explores a scenario in which Australia could double the value of its iron and steel exports to A$150 billion by converting just 18% of currently mined iron ore into steel using renewable hydrogen.

This would be a welcome boost for the national balance of trade, counteracting any reduction in coal exports due to climate and energy policies among Australia’s trading partners.

Making this amount of zero-emissions steel requires a huge amount of renewable electricity – almost double the total electricity generated in Australia in 2018.

But this demand for renewable energy is part of the point – Australia can do this, most of our competitors cannot due to their greater energy demand relative to land suitable for generating renewable energy.

A successful zero emissions metal industry would bring many thousands of steady jobs, often in regional areas with higher unemployment. It could also support towns such as Portland, in Victoria, and Gladstone, in Queensland, where metal producers are already the chief employer.

The market for zero-emissions metals is likely to be enormous. Until recently, emissions embodied in materials have been neglected. But this is changing, as hundreds of the world’s largest companies commit to reducing the emissions of their supply chains.

For example, car makers Volkswagen and Toyota are aiming for zero-carbon production.

In September the World Green Building Council challenged the global construction sector to ensure all new buildings have net-zero embodied carbon by 2050. Such public commitments are a strong signal to manufacturers everywhere.

Zero-emissions metals could be one of Australia’s most significant new industries of the 21st century.

To make it happen, our report recommends governments acknowledge this opportunity by creating a National Zero-Emissions Metals strategy, committing serious resources to ensure it succeeds. This strategy should identify and evaluate Australia’s best opportunities within the metals sector.

If we don’t do something then, as South Australian Senator Rex Patrick put it, we’ll just continue to “export rocks” and let others reap the benefits from developing technologies to process them.